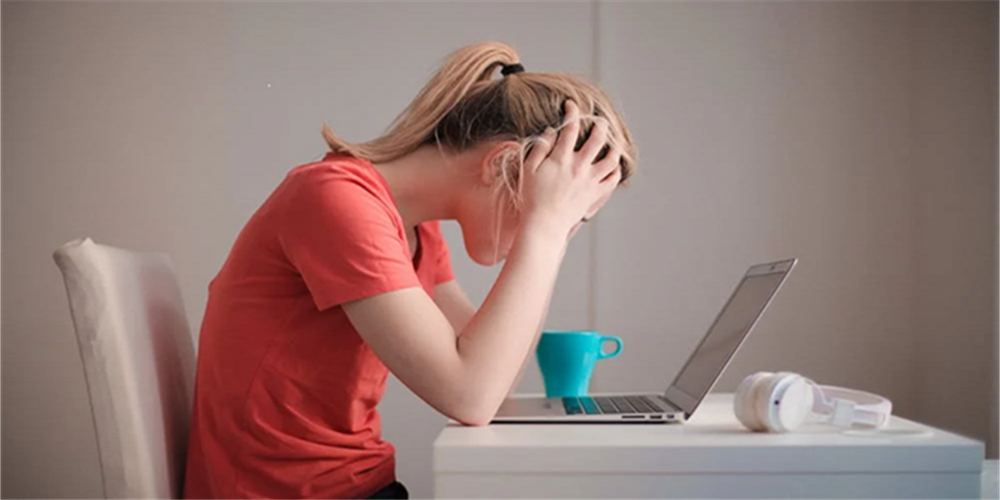 What is an anxiety disorder?

What are the most common causes of anxiety?

When does anxiety need medication?

What are the six types of anxiety?

What is the treatment for anxiety?

How can you manage your anxiety levels on a daily basis?

The first time I ever saw someone have an intense bout of anxiety was in college.

My classmates and I were sitting outside of our Macroeconomics class waiting for our professor when (seemingly out of nowhere) one of our classmates started screaming “No! No! No!” over and over again.

Within seconds, her body slammed to the ground and she continued screaming while banging her fist on the ground. My professor soon arrived to help her (along with an ambulance) and suffice it to say, the class was canceled.

My classmate was a strong, tall, powerhouse. She must have been almost six feet tall — she loved to laugh and joke around in class, so to see her like this was a shock to everyone who witnessed it.

But what I and the rest of the class didn’t know about her, was that she suffered from something called Panic Disorder, which manifests through extreme anxiety.

That image has been forever ingrained in my memory. That’s when I understood the toll that an anxiety disorder can take on a person’s life, and one of the main reasons I became a mental health advocate and coach.

What is an anxiety disorder?

Anxiety is a natural emotion characterized by temporary worry or fear that can occur as a result of stress (i.e., before taking a test or dealing with a problem at work).

An anxiety disorder is characterized by excessive fear and excessive anxiety — an intense fear and worry that doesn’t go away and even gets worse over time if left untreated. 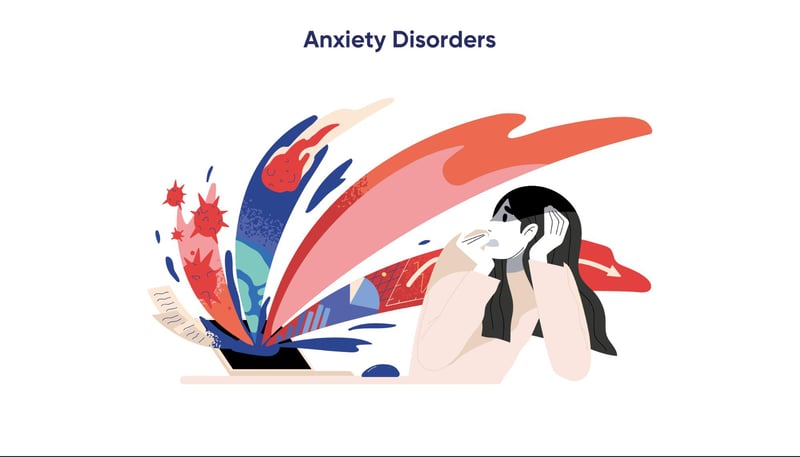 Contrary to common belief, an anxiety disorder is not centered around mood; it’s a mental health challenge with severe anxiety (though it can affect your mood too).

What are the symptoms of extreme anxiety?

An anxiety symptom can take many forms and often involves uncomfortable mental and physical symptoms that impact your life, like excessive worrying, body tension, headaches, and muscle pain.

Other possible anxiety disorder symptoms include:

Anxiety can also put you at a higher risk for developing other mental and physical challenges.

What are the most common causes of anxiety?

A combination of genetic and environmental factors contribute to the risk of experiencing extreme anxiety.

The risk factors for each type vary, but some general factors include:

When does anxiety need medication?

If you notice that you’re struggling to cope, and your symptoms of stress and anxiety aren’t going away, then it may be time to see a mental health professional about a diagnosis and medication — especially if you’ve already tried several coping techniques without success. 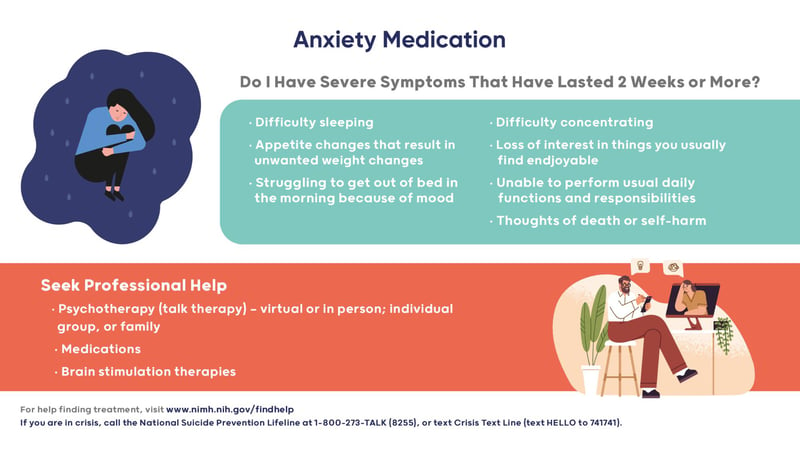 What are the six types of anxiety?

According to the National Institute of Mental Health (NIMH) Expert Dr. Krystal Lewis, anxiety disorders are the most common form of mental health in adults.

In this section, we’ll go over each of them.

The 6 main types of anxiety disorders include:

1. Generalized anxiety disorder. This type of disorder displays excessive anxiety or worry on most days for at least six months.

Worries can be about several things related to personal health, work problems, interacting with others, and general routine life circumstances. As a result, there can be significant problems at work, home, school, and with social interactions.

2. Separation anxiety disorder. Both children and adults can experience Separation Anxiety Disorder (fear of being parted from people they’re attached to).

This typically involves feeling afraid that something bad will happen to their attachment figures while they’re separated and often leads to refusing to be alone or leave their side.

People with separation anxiety may also experience intense physical symptoms when they’re separated from or anticipate separating from their attachment figures.

3. Specific phobia. People who have a specific phobia experience intense fear or anxiety about specific objects or situations. They may have irrational or excessive worries about encountering their phobias, and they may also take active steps to avoid them.

When encountering their phobias, they may have to experience or endure immediate, intense anxiety (especially if they’re unavoidable). Some common examples include fear of spiders, fear of heights, fear of flying, and fear of blood.

4. Social anxiety disorder (social phobia): People with Social Anxiety Disorder have general intense anxiety and intense fear in social situations or in situations where they have to perform — like hosting an important business meeting or giving a presentation at school.

People with this challenge try to avoid social situations altogether, as they worry that their actions or anxious behaviors will be negatively judged or evaluated, leaving them feeling embarrassed and misunderstood. In situations where they can’t leave, they’re forced to endure severe anxiety and may experience a range of intense symptoms like a racing heart, chest pain or feeling hot, shakiness, and headaches. 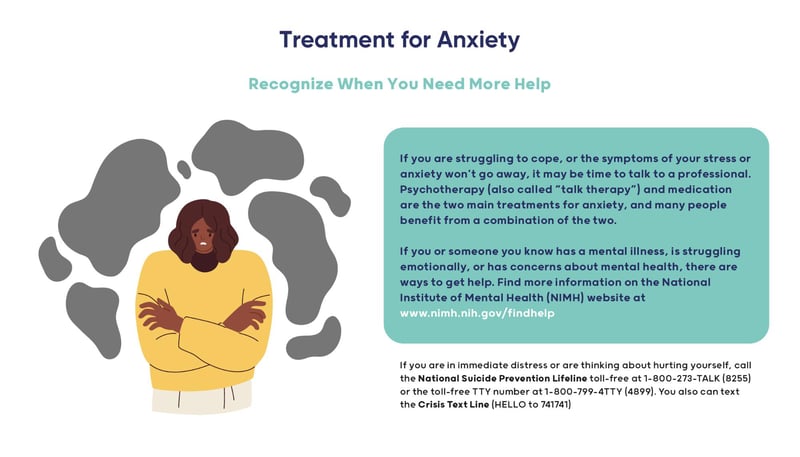 5. Panic disorder. A Panic Disorder is characterized by unexpected or recurring panic attacks. A panic attack includes a sudden or intense fear that seems to come out of the blue and typically peaks within minutes.

These attacks can be triggered by a feared situation or object (or can come on unexpectedly). During a panic attack, people often experience feeling out of control and afraid that something bad’s going to happen — a feeling of impending doom.

People with Panic Disorders try to avoid panic attacks at all costs by avoiding people, places, things, and behaviors that can trigger an attack.

Unfortunately, these avoidances can cause significant problems in all areas of their lives due to an obsession with avoiding triggers (leading them to miss out on social, family, and work experiences).

6. Agoraphobia. People with Agoraphobia experience intense fear due to two or more of the following situations: being outside of the house alone, standing in line or being in a crowd, being in enclosed spaces (claustrophobia), being in open spaces, and using public transportation.

As a result, people with Agoraphobia tend to avoid these situations because they fear not being able to leave if they experience panic-like symptoms or embarrassing symptoms. A person with severe Agoraphobia may refuse to leave their house altogether.

What is the treatment for anxiety?

An anxiety disorder often requires clinical help. Typically, a combination of psychotherapy (i.e., cognitive behavioral therapy (CBT), exposure therapy, and metacognitive therapy) and anti-anxiety or antidepressant medication is the main treatment. However, it’s important to get a comprehensive and personalized treatment that focuses on the whole person.

This includes (but isn’t limited to) personalized diet and lifestyle changes and other healing modalities designed to work with therapy and medication, such as: 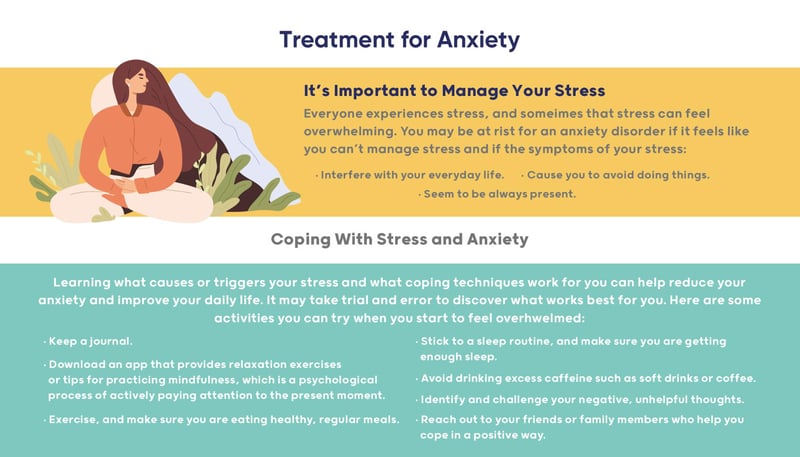 Treatment should always be as personalized as possible, with a large focus on holistic healing: mentally, physically, emotionally, and spiritually.

If appropriate, treatment should also address professional and personal problems like difficulties coping socially or experiencing challenges at home (like difficulty getting along with a spouse).

Can anxiety be cured?

Since anxiety is a natural emotion (like stress is a natural reaction), it can’t be cured, but there are many ways to manage anxiety symptoms and help prevent anxiety from creeping in.

Focusing on becoming resilient and reframing mental health are key to transformation.

How can you manage your anxiety levels on a daily basis?

To manage anxiety daily, it’s important to create a mental health strategy for work, home, social situations, and personal time. Work with your doctor, coach, or mentor to help you if needed.

First, brainstorm and write a list of anxiety-producing thoughts, situations, or feelings — real or imagined — that occur: at work, at home, in social situations, and during personal time.

Next, arrange the items by rank from lowest to highest.

Then, identify and write down your feelings, anxiety, and discomfort related to the first hierarchy item.

Next, identify and write down unhealthy thoughts, expectations, or ideas related to that first item.

Then, identify and write down alternative and realistic ideas to cope with the uncomfortable feelings and anxiety, like:

Finally, write down how healthy coping is positively affecting your life and encourage yourself with self-awards (like a half-day off to go hiking at your favorite spot).

Repeat this process with every item on your list until you’ve created your mental health strategy.

Some other tips for managing daily anxiety include:

And if all of that is too much right now, you can focus on this simple acronym: GREAT.

Gratitude: Approach each morning and evening with gratitude. Ask yourself: how can I express gratitude today?

Exercise: Get that body moving.

Acknowledge: Accept and acknowledge your feelings. Change and adjust your expectations and be realistic. (Limit comparisons — what you see on social media often isn’t an accurate picture of what’s going on).

Track your thinking: Track and change your thoughts; pay attention to your thinking patterns. Ask yourself: what’s my purpose? How can I adjust my behaviors and thoughts to manifest that purpose?

Want to help your leaders take it to the next level?

Although anxiety can negatively affect all aspects of life, a commitment to resilience, healthy coping mechanisms, and getting treatment when necessary, will pave a new path to mental fitness for anyone ready to tackle their anxiety once and for all.

If you’d like to know more about how we can help you improve your mental well-being, reach out to our team today.

What is an existential crisis? Causes, symptoms, and how to overcome it

Many people feel anxious from time to time—it’s a common and natural response to stress. But if feelings of anxiety are interrupting your life, it may be time... Read More
Well-being
19 min read | June 15, 2021

When you need to overcome fear and anxiety, these 7 steps can help

The saying goes “the only thing we have to fear is fear itself” — but there’s a lot of scary things out there. Managing our fear and anxiety well — and... Read More
Well-being
15 min read | June 30, 2021