What are influence tactics?

11 influence tactics and how they work

The powers of influence in leadership

What are the different types of power?

Imagine your boss asks you to do something you don’t want to do. They promise to reward you for complying and threaten to punish you if you fail to do so.

Now, let’s say your boss asks you to buy into their vision by appealing to your values and personal priorities.

Not only would you be more willing to comply with their request, but you’d also be on board with their vision and motivated to take action.

The difference between these two examples is that one relies on power while the other uses influence tactics.

An effective leader knows which tactic will be most effective in any given situation. But how can you, as a leader, learn to use influence tactics effectively?

Read on to learn what influence is, the most effective influence tactics, and how influence relates to power.

Influence is a way of persuading someone to do something by changing their attitudes or beliefs about it.

We define influence in the workplace as a leader’s ability to convince employees to support and implement plans and strategies.

Influencing someone’s beliefs or attitudes is a more effective way of making them act than simply wielding power over them.

Yet many leaders — especially newer ones — rely on their authority and power to impose their will on their team members.

This type of leadership can only work for so long. Eventually, it leads to lower employee engagement and higher employee turnover.

Influencing, on the other hand, increases employee engagement. According to Gallup, greater engagement leads to 18% more sales and 81% less absenteeism.

The more you can master the art of influencing, the more effective you will be as a leader. The best leaders have strong powers of influence.

There are many different ways to influence people. Great leaders know which tactics to use to get the best results in different situations. 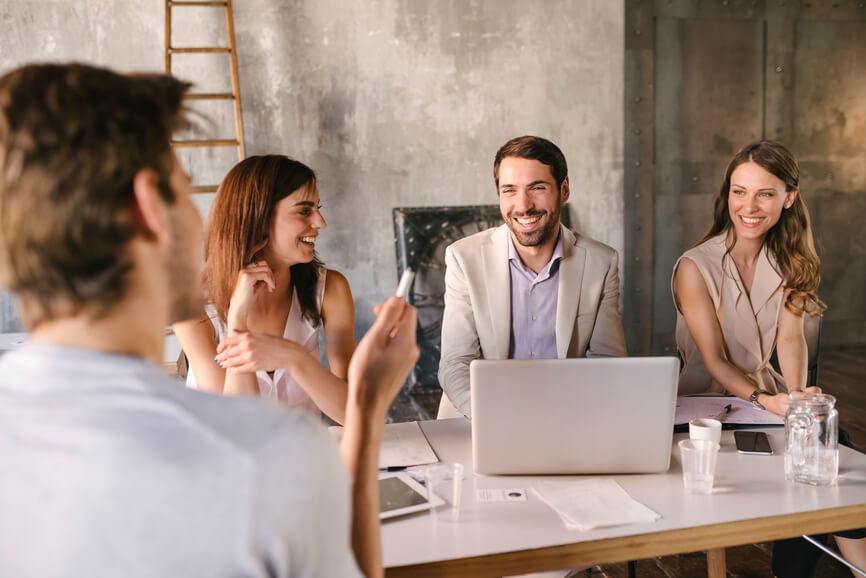 What are influence tactics?

Influence tactics are strategies that leaders can use to change their employees’ attitudes, values, or behaviors.

The actual tactics that leaders use vary according to the situation and the desired outcomes. For example, middle management leaders use different tactics to influence their superiors and subordinates.

An effective leader knows which is the best tactic to use to achieve their desired outcome. For example, the CEO of a startup may wish to influence their employees to:

11 influence tactics and how they work

So what does influence mean in practice? And how can you use your powers of influence to achieve the outcomes you want?

There are different types of influence tactics, and some are more effective than others. You’ve probably seen some of them in action, and you may have even used them yourself.

We can broadly divide them into two categories: hard or push tactics and soft or pull tactics.

Push tactics tend to be better suited to situations that require short-term action, such as in the case of employee misconduct.

In general, pull tactics are more appropriate for day-to-day team management. They cultivate support rather than mere compliance.

Let’s take a look at 11 of the most common influence tactics and the effectiveness of each: 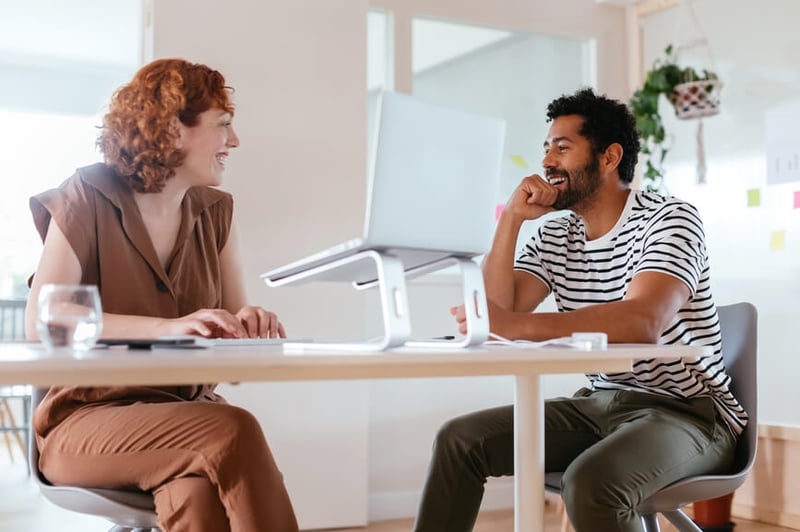 As a push tactic, the aim of pressure is to make a person change their behavior or carry out an order by using intimidation, threats, and authority. In most cases, it is not an effective tactic.

Assertiveness is another push tactic. It could be setting unreasonable deadlines, repeatedly making requests, and getting angry with employees. It is also relatively ineffective.

Legitimating means convincing a person they should comply with a request, given their position or situation. It’s a push tactic, and its effectiveness is limited.

Coalition is a tactic that leaders use to leverage employees who support them. They form alliances with these employees and use them to try to influence others. As a push tactic, it’s fairly ineffective.

Exchange is a push tactic, although a moderately effective one. It involves offering a reward or benefits to employees who comply with what you request of them.

An upward appeal means asking for the support of your superiors before making a request of your employee. This tactic is also moderately effective, as it gives the influencer more authority over their direct report.

Ingratiating means getting on someone’s good side before asking them to do something. It might look like offering to help them with something or paying them a compliment. This is a pull tactic, and it is moderately effective.

Rational persuasion is a way of influencing people using logical arguments and factual evidence. It is also a moderately effective pull tactic.

This tactic relies on interpersonal relationships to persuade someone to do something as a “personal favor.” This is a pull tactic, although the person on the receiving end may experience a certain amount of pressure. It is moderately effective.

This tactic appeals to people’s emotions, values, and ideals. Inspirational appeals aim to arouse enthusiasm or increase employees’ confidence. This is a pull tactic, and it is highly effective.

This tactic is the most democratic and collaborative. It requires involving people in strategic planning and decision-making. It is also a highly effective pull tactic.

The powers of influence in leadership

Burnout is an increasingly common problem. And it’s not the workload or environment that matters most — it’s management and the management style being deployed.

Managers are responsible for ensuring their teammates feel inspired, motivated, and supported. When they do so, employees are more productive, less stressed, and less likely to burn out.

That’s why it’s essential for leaders to master the art of influence tactics. Managers with high emotional intelligence know which influence tactic to use in any given situation.

What are the different types of power?

Influence and power are two different things. To have power is to have the ability to force someone to do something. Ineffective leaders rely solely on the authority and power of their position to impose their will on their employees. The problem with this leadership style is that it decreases employee engagement.

Yet effective leadership requires both power and influence. Like influence tactics, some types of power are more effective than others, and understanding them can make you a better leader.

Researchers French and Raven established five main sources of power. Let’s take a look at each in detail:

This type of power is established by the role or position a person occupies in an organization.

Employees recognize it as legitimate power. This means they comply with the orders the leader gives, even if they don’t agree with them.

The CEOs of startups often have legitimate power. This makes it easy for them to persuade and influence their employees to commit to the company’s vision.

This source of power comes from the capacity to reward your employees through benefits, promotions, and raises. Wielding this type of power requires no skill. However, it is often linked to legitimate power.

For example, a CEO might decide to set an ambitious objective, such as a 10% increase in sales in a year. If employees manage to hit the target, they will receive a 5% bonus on their annual salary.

Coercive power is the opposite of reward power. It works by using fear and force.

Expert power comes from having broad experience and deep expertise in a particular sector or field.

Tech companies and other companies that rely heavily on technical abilities depend on expert power.

In many of these organizations, horizontal and democratic structures work better than hierarchical ones.

Referent power is often seen in charismatic leaders. This type of power makes a leader seem interesting and attractive. They inspire admiration and fascination in others.

This is the source of power for people who are loved, respected, and appreciated by their colleagues and communities. A good example of referent power is former U.S. President Barack Obama.

If you want a highly engaged and highly motivated team, you should learn to use influence tactics effectively.

Using the right mix of influence tactics and bases of power can help you overcome many challenges you will face as a leader.

However, it can take time to gain the necessary experience. Working with a coach is a great way to accelerate your results and become a more influential leader more quickly.

When it comes to influence tactics, a coach can help you discover what the most effective tactic available for you is.

Book an appointment with one of BetterUp’s expert coaches to discover how.

Learn the difference between power and influence, what their sources are, when to use one or the other, and how mastering both can help you become a better leader. Read More
Coaching
14 min read | July 12, 2021

Learn why building influence in the workplace is important and nine strategies for how to do it. Then, discover what to avoid when building influence. Read More
Leadership & Management
15 min read | July 12, 2021

Strategy vs. tactics: the difference is execution

Learn the difference between strategy vs tactics and read the definitions of both. Plus, discover tips for how to successfully track strategy and tactics. Read More
Leadership & Management
13 min read | October 5, 2021

What is referent power, and why is it so influential? Learn how leaders use their influence on others in our guide to referent leadership in the workplace. Read More
Professional Development
13 min read | October 13, 2022

5 tactics for managing managers effectively — and why it matters

Building influence without authority: Be the change you want to see

Building influence without authority can help you make positive changes in your company. Here’s how to be the change you want to see. Read More