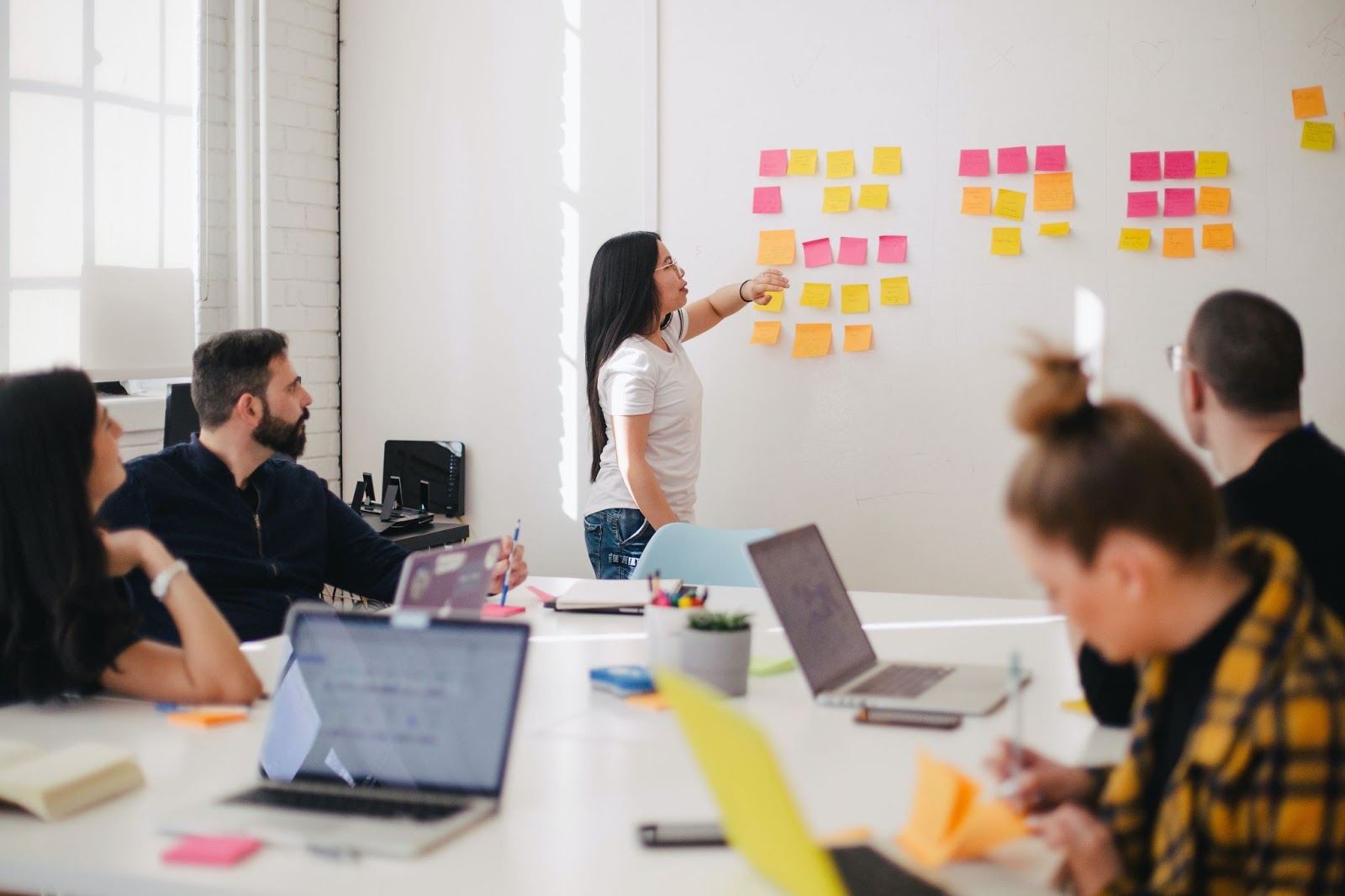 In nearly any social setting, it can be easy to identify who has influence and who doesn’t.

Influential people stand out by easily capturing attention. They can persuade others to agree with them and draw respect from those around them.

Influence is a form of power in any situation, and especially in the workplace.

People with influence at work tend to be more trusted and recognized. And often, influential people are also more effective leaders.

But you don’t have to be in a leadership position to build influence among your peers and superiors. In fact, there’s a distinct difference between having power and influence.

In fact, even if you’re starting at a new job, you can build influence without stepping on anyone’s toes.

Let’s dive into what influence is, why it matters at work, and steps you can take to start building influence at work.

In any workplace team, each member has a certain degree of influence.

Often, people with higher-ranking titles tend to be the most influential. This is especially true in corporate cultures, and it can affect employee behavior.

For example, if a senior manager is always staying late into the night, their reports will often follow suit.

If a manager encourages a healthy work-life balance, it works the same way.

Let’s imagine that they always leave the office on time to pick up their kids. Their employees will likely follow suit. And they may just have a happier home and work life because of it.

But the benefits of being an influencer at work don’t start and end with leaders and how much time they spend at work.

Some of the most important benefits of building influence in the workplace include: 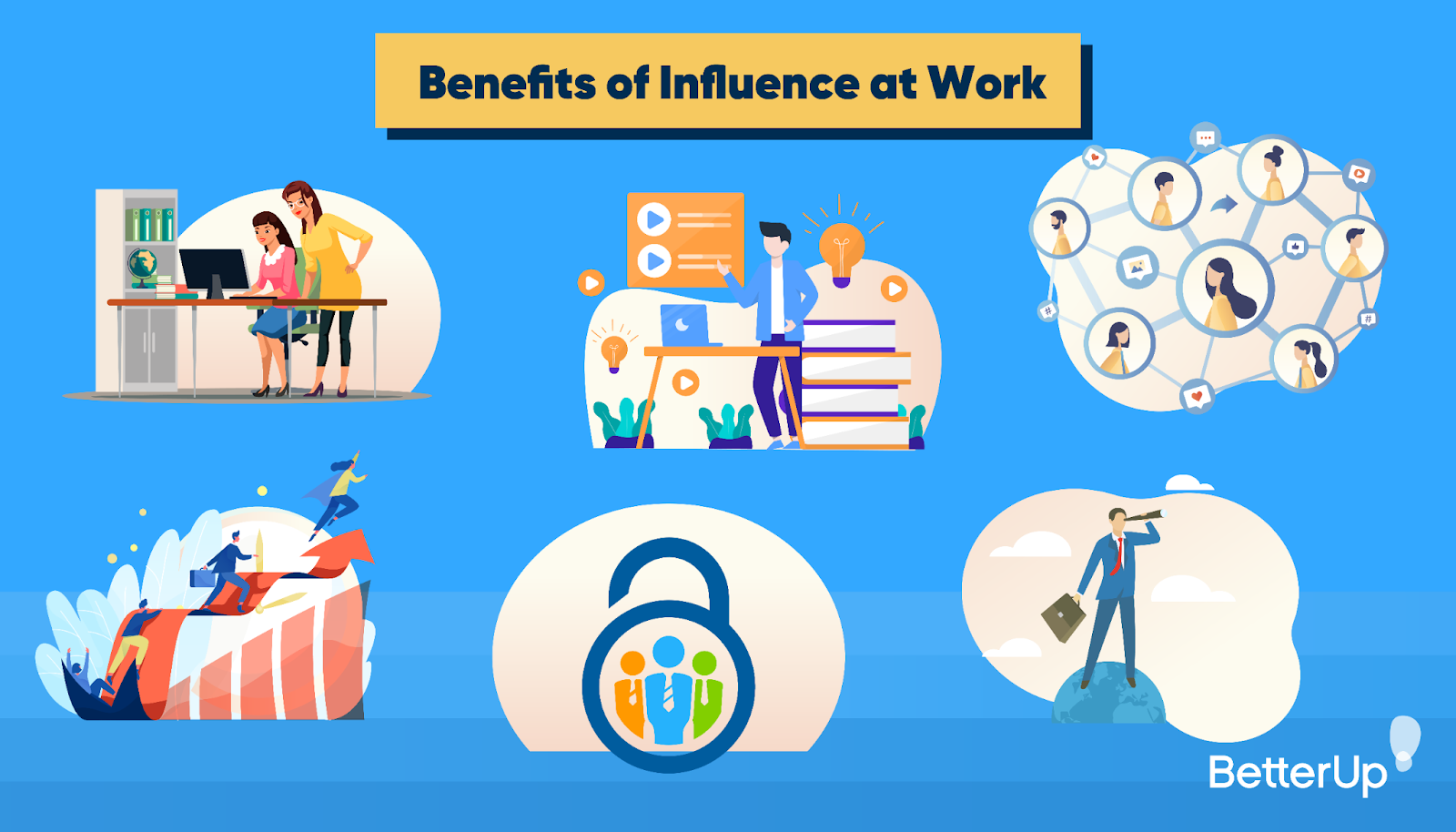 These days, nearly every professional team has at least one, if not all, employees working remotely. As a result, it’s harder than ever to establish influence at work.

When you don’t see coworkers, employees, and managers face-to-face, it’s harder to bond and develop a sense of trust. Plus, most conversations happen via digital messenger platforms or email.

These platforms lack the emotional connection that comes from face-to-face conversations.

They can also mask your personality. Even worse, text communications make misunderstandings all too easy.

Yet, there are still ways to build more influence, with or without in-person meetings.

Here are nine tips to influence others: 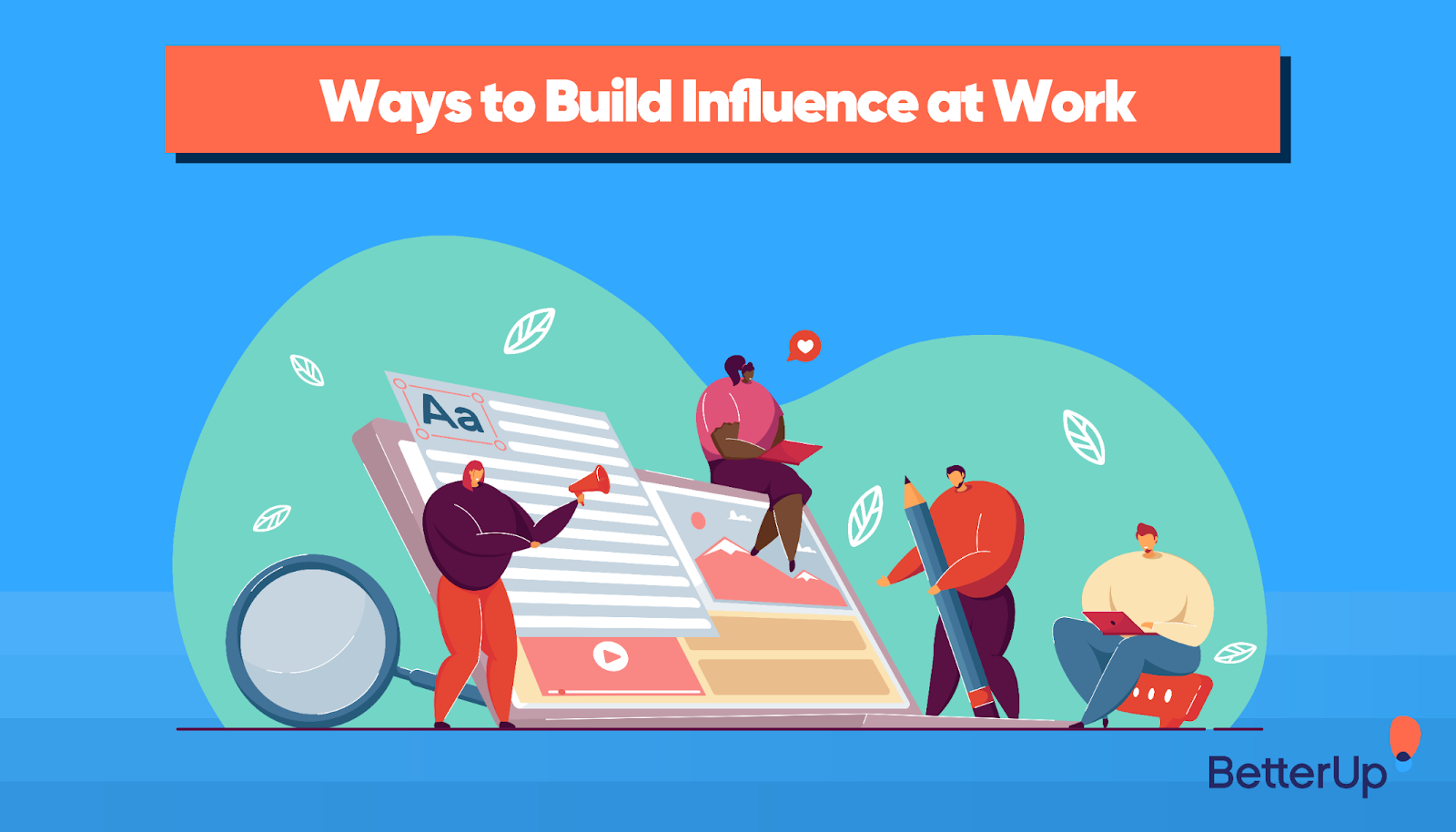 Take the time to make one-on-one connections with people across the office. This includes coworkers in other departments and at various levels.

Listening is a big part of communication and learning how to influence others. Whether you already know your stance on a discussion topic or not, take the time to listen.

Hearing your coworker’s thoughts before launching into a persuasive argument can help you bond. For starters, your mind may change. And more importantly, you’ll help others feel heard and acknowledged.

3. Check your body language and tone

As much as possible, show others that you’re listening. Ask questions and give other people the time they need to form and express their opinions.

Be someone others can rely on. Consistency is an important part of reliability. When people don’t feel that they can count on you to deliver or be on time, they won't trust you with other important tasks.

Instead, make yourself indispensable to meeting company goals by being trustworthy and reliable.

It’s important to form opinions and make sure your ideas are heard. But don’t be too forceful in how you communicate. Always be open to other ideas from your audience.

Be honest, transparent, and open with your coworkers.

People appreciate a certain level of vulnerability and authenticity in others. It also makes you more relatable and makes it easier to build meaningful friendships.

Part of having an opinion and listening to others is being willing to bend or compromise. If the group doesn’t agree with your stance, be comfortable agreeing and moving forward with another plan. This is also part of putting the company goals before your own.

Actions speak louder than words. Don't just express your opinions. Follow through with the steps that will move the company forward. And finish every job you sign up for.

This helps show others that you share their goals and makes you a more effective leader.

Part of influencing others is being willing to help them. You might look for opportunities to do favors for them. It is more important to be generous when someone asks for your perspective, needs a word of encouragement, or is seeking direction. Connect people to resources, groups, or leaders within the organization that they might not be aware of when you can.

These helpful acts won’t be forgotten, even if you’re not praised or even acknowledged at the moment.

When learning how to build influence at work, there are a few places where it’s easy to take a wrong turn.

Keep these tips in mind to know what not to do when building influence: 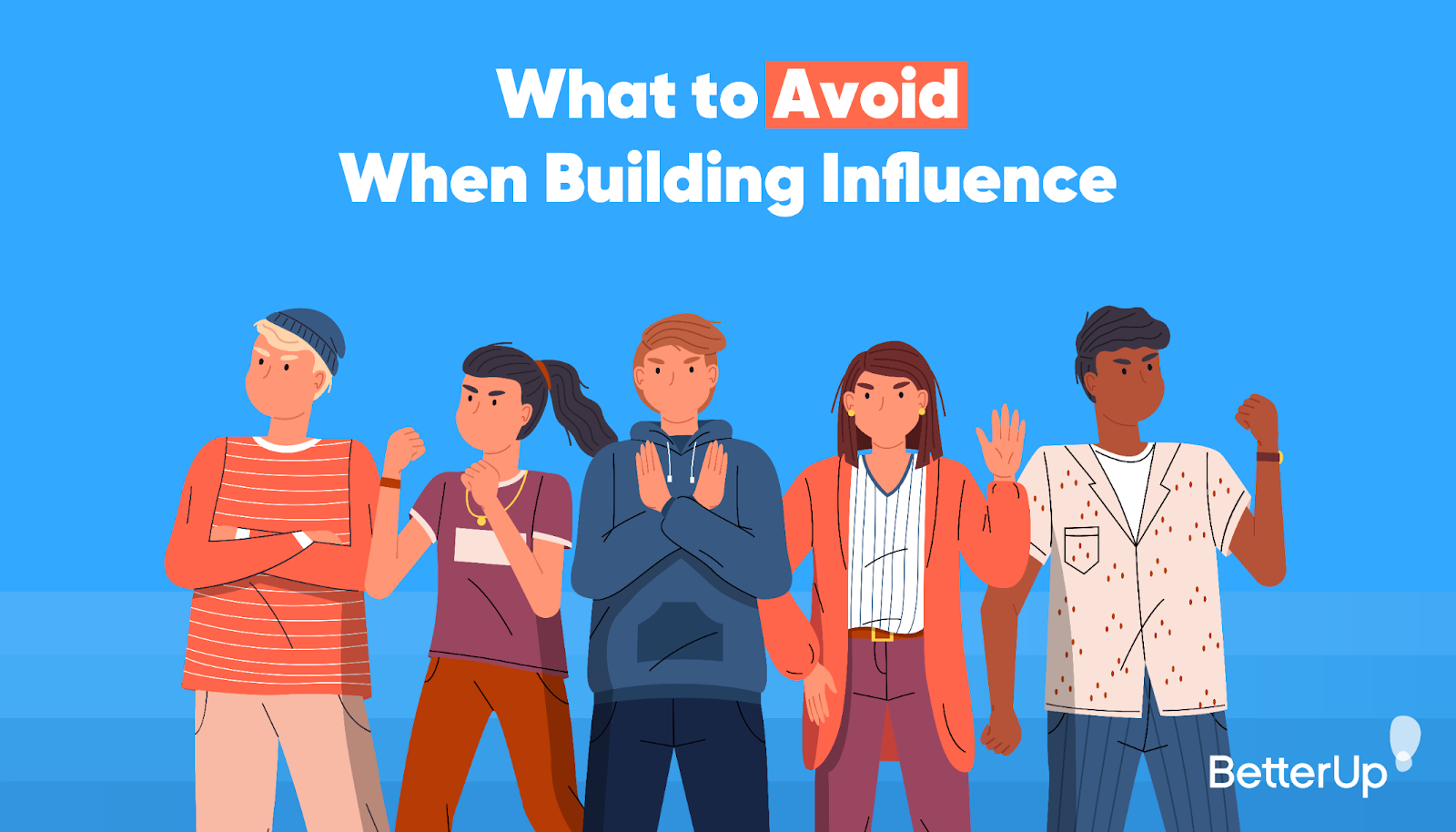 1. Don’t close yourself off to criticism or take things too personally.

It’s important for your coworkers and superiors to feel that they can speak their minds to you. They should be able to provide constructive criticism without making you defensive.

Make an effort to show that you’re available and interested in coworkers across all departments. This includes employees with titles above and below your position.

The more connections you have at work, the greater your sphere of influence will be.

Digital distractions are constantly working against your quest to build influence. First, the constant availability of online content means we see each other less often.

And then when we do interact with other people, phones and laptops are often physical and mental barriers to deep conversation.

Cut through the digital noise and make it a point to put away distractions when you’re with coworkers. This helps make sure that they feel heard and that their time is valued.

Physically, how we stand sends a clear signal to others about our interest in and openness to them.

Having your arms crossed, avoiding eye contact, or looking down indicates that you want to be left alone. Instead, open your body up and use a friendly face to make eye contact. 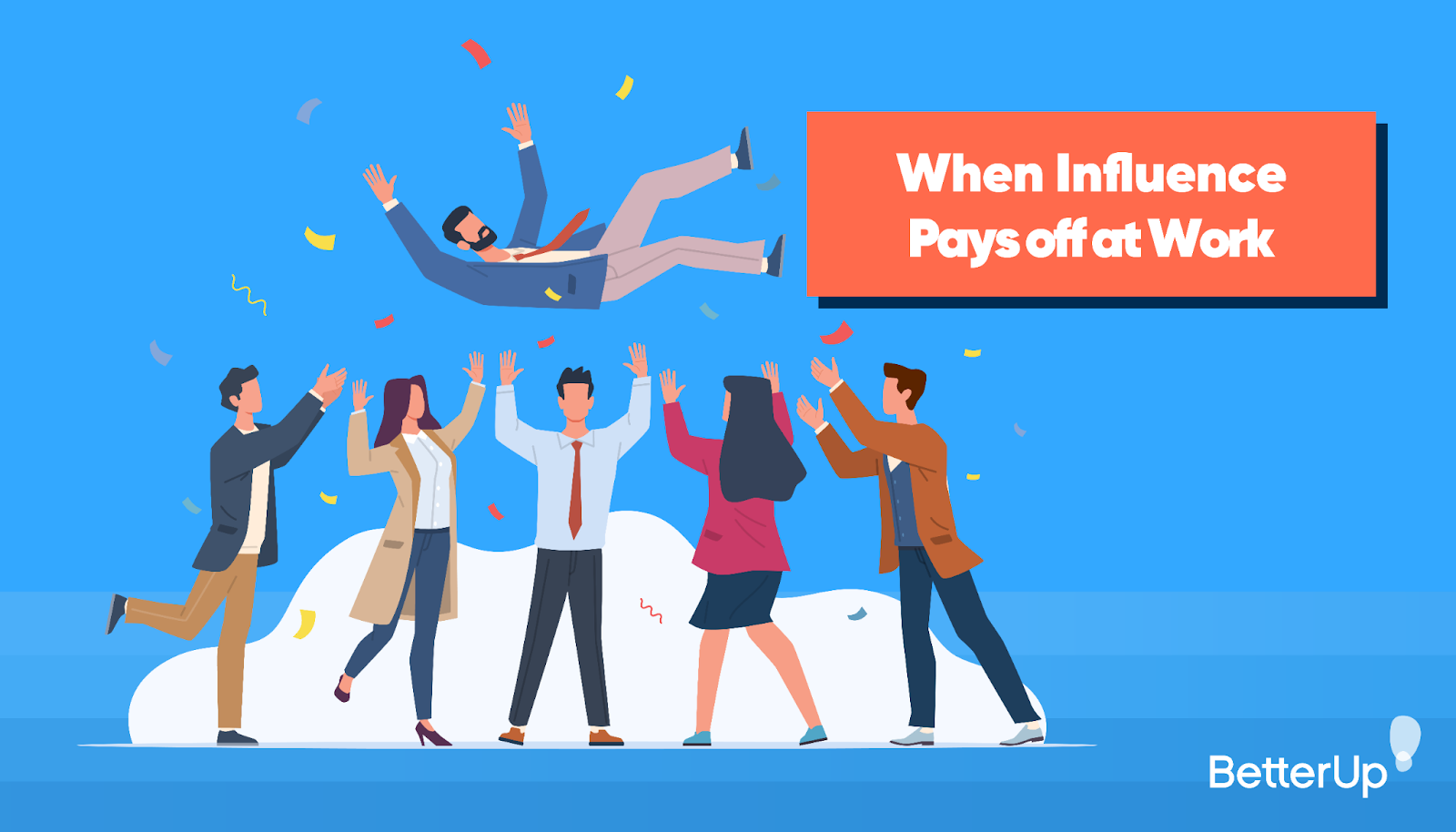 Here are two real-life workplace examples of how the right amount of influence can help individuals transform an organization.

Sheryl Sandberg’s rise within Silicon Valley is a testament to her influence. She started at Google running the Google Ad program, which was a four-person team at the time.

She eventually became the VP of global online sales and operations. When she was offered the CFO position at Google, she declined.

Since joining Facebook, Sandberg has used her well-earned influence within the organization and Silicon Valley to change the perception of women in the workplace.

She launched a public campaign against using the word “bossy” to describe women.

She also partnered with Getty images to create stock photos that show women in more positions of power in the workplace.

Another example of a leader who uses his influence for good in the workplace is Doug Conant. Conant became the CEO of Campbell’s Soup in 2001. At this point, the business was in a financial crisis.

To change course for Campbell, Conant made a public promise to walk at least 10,000 steps a day at work. His goal was to get to know as many employees as possible.

By the time he stepped down in 2011, Campbells was outperforming the S&P Food Group and the S&P 500. They also won Gallup’s “Great Workplace Award” four years in a row.

You don’t have to be a C-suite executive to have influence at work.

And there’s no better time than the present to start building your stature in the workplace.

Use these strategies to build influence and reap the benefits of a more cohesive, effective team.

We help individuals and teams develop the skills to enhance their influence and efficiency in the workplace. See how BetterUp’s coaching offerings can help your team move forward.

Building influence without authority: Be the change you want to see

Building influence without authority can help you make positive changes in your company. Here’s how to be the change you want to see. Read More
Leadership & Management
15 min read | June 21, 2021

Learn the difference between power and influence, what their sources are, when to use one or the other, and how mastering both can help you become a better leader. Read More
Leadership & Management
15 min read | November 15, 2021

What is referent power, and why is it so influential? Learn how leaders use their influence on others in our guide to referent leadership in the workplace. Read More
Leadership & Management
13 min read | October 5, 2021

Good leaders who lead successful teams have many skills, from influence to humility. Our data shows what is most important to employees and bottom line. Read More
Diversity & Inclusion
16 min read | October 4, 2021

The cognitive biases caused by the availability heuristic

Learn about the availability heuristic, how it can mislead you, why it can cloud your judgment, and the best ways to avoid its influence on your decisions. Read More
Research & Insights
15 min read | July 12, 2022

How companies are using coaching to build connection, community, and commitment

Research shows connection in the workplace has real impact on the business. Learn how some companies are succeeding by building community through coaching. Read More