The 8 toxic leadership traits (and how to spot them) 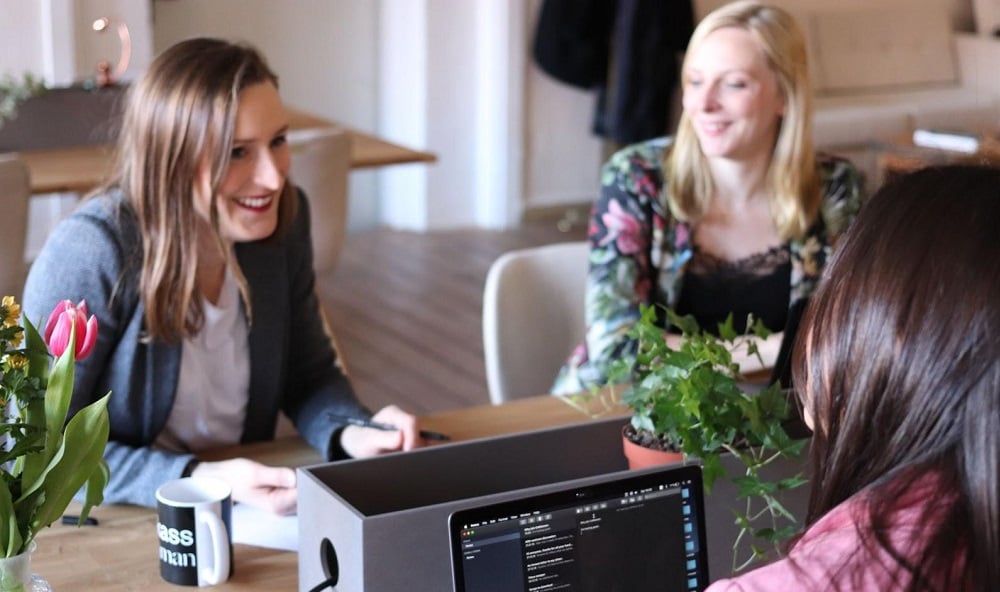 What is toxic leadership?

What are the effects of toxic leadership?

How to spot a toxic leader?

How to deal with a toxic leader

Is it possible to detoxify a leader?

Working under destructive leadership is not just difficult for morale. It can also affect the performance of an entire team. Because toxic leaders tend to focus on their own interests, their behavior comes at the expense of their team’s wellness.

But it’s not always easy to spot toxic or destructive leaders, even if it seems obvious in hindsight.

Let’s take a look at what toxic leadership can look like and how you can deal with a toxic leader to thrive in your place of work.

What is toxic leadership?

The toxic leadership definition is as follows: a type of leadership that is destructive to members of a team and the overall workplace. It’s a selfish abuse of power on the part of the leader.

Under toxic leadership, it’s difficult for you and your peers to thrive. A toxic leader will usually have their own self-interest at heart. This affects a team's performance, productivity, and morale to varying degrees.

What are the effects of toxic leadership?

Toxic leadership and bad leadership qualities have an impact on everyone who works with the leader who exhibits these toxic traits.

A study from the University of Manchester surveyed 1,200 people to discover the effects of toxic leadership, which included:

In the case of workplace bullying, it is often developed as a mediating mechanism when toxic leaders are present. Employees are more likely to retaliate and redirect their frustrations at others around them.

Overall, a toxic boss is an obstacle to healthy workplace culture. Of course, not all toxic leaders will have the same degree of influence on work culture because not all will display the same toxic traits. 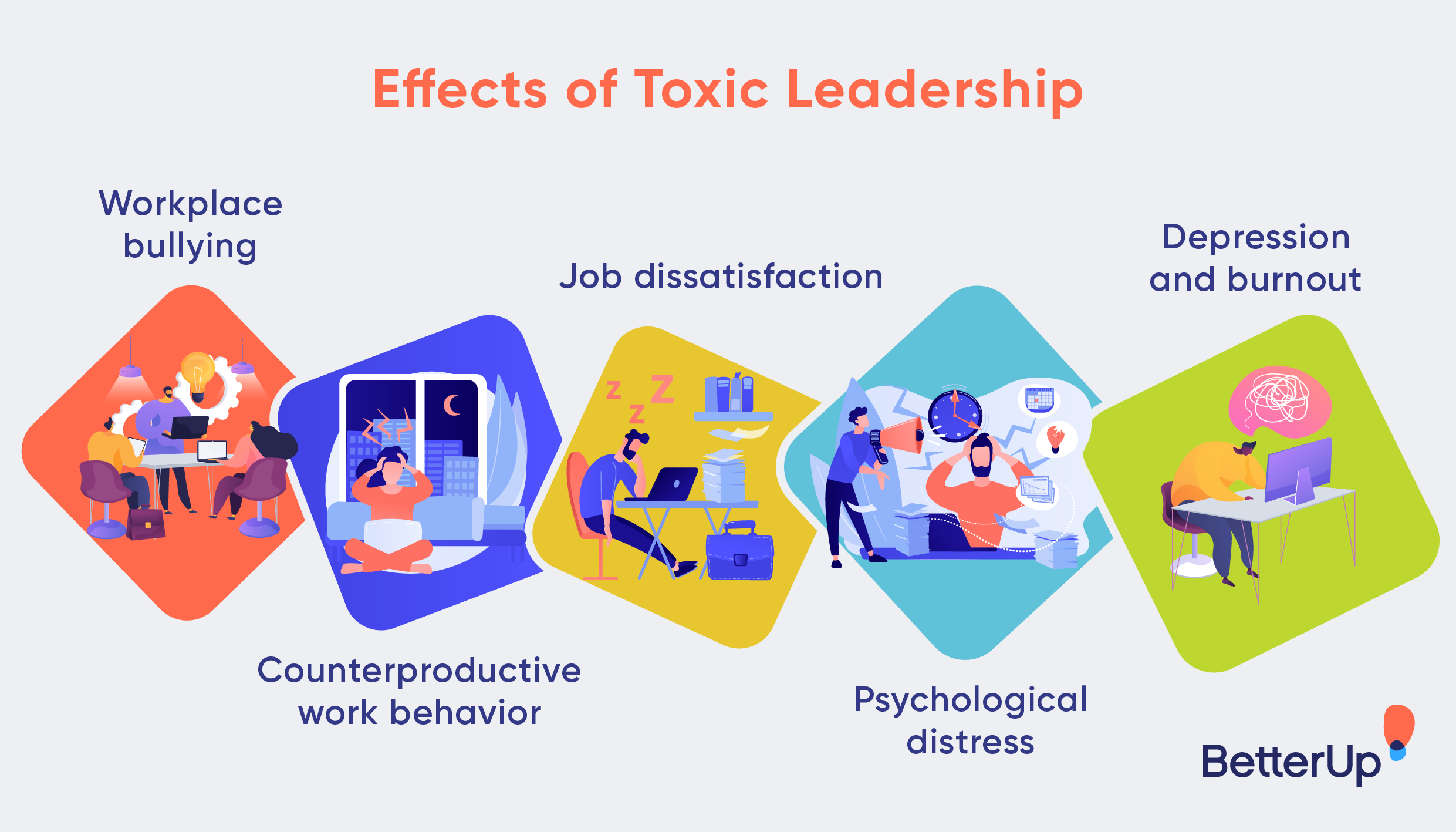 Sign up for the latest insights, articles, and exclusive resources from BetterUp.

How to spot a toxic leader?

It’s important to keep an eye out for possible toxic leaders around you so that you can adjust and thrive despite their impact. Here are eight toxic traits that make bad leadership qualities.

Dishonesty in the workplace is toxic because it’s difficult to understand your place of work when you don’t have access to the truth.

Toxic leaders also tend to be inconsistent and often backtrack on what they said.

This can cause gaslighting as well.

Let's take a look at an example. Say your manager tells you on Thursday that your current assignment is due on Friday, then berates you when it isn’t complete by the end of the day. They now state that they previously said it was due today.

This is an example of gaslighting at work. Gaslighting is a type of psychological manipulation that involves one person making the other person question their own memory or judgment.

Everyone has room to learn, but toxic leaders aren’t willing to hear constructive criticism.

Concerns from their team members go unheard, which prevents the team from improving. It also means that a toxic leader stays stuck in their ways.

Here’s an example. You think it would be more effective for the entire team to cut the daily afternoon meeting. You feel that most of what goes on could be discussed over email.

However, your manager refuses to budge on the issue. This meeting was their idea, and they’re taking this criticism personally.

Toxic leaders believe they are always right, which is one of the reasons they have difficulty listening to feedback.

They expect people on their team to accept what they say as the truth without question and don’t want to be corrected.

For example, let’s say that you’re in a meeting, and your manager states that the client said they prefer something in particular. You know this is wrong because the client told you so. If you try to correct them, they will either ignore you or berate you for attempting to correct them.

Hierarchy (people’s ranks and roles within the business) is what gives toxic leaders control over their team.

Since they want to keep this power, they value this hierarchy. They will make sure it stays in place.

For instance, they'll shut down an initiative that would allow people on their team to be more independent and make their own decisions.

Toxic leaders often have their own biases against people on their team, whether positive or negative. Often, they do not practice inclusive leadership.

This could show up in the form of giving preferential treatment to their friends, or as sexism, ageism, racism, homophobia, and more. Such discrimination can result in a highly toxic workplace.

Here’s an example: the manager praises their friend, even when this friend has done a mediocre job. On the other hand, the same manager is never happy with your work, even when you outperform expectations.

Toxic leaders don’t typically have a lot of self-confidence. This is often where toxic behavior stems from, as an attempt to overcompensate.

A lack of confidence also means they may find it difficult to trust their subordinates.

As an example, a manager who lacks confidence may micromanage because they don’t trust you to handle a task.

7. Incompetent at their job

Even if toxic leaders believe they are always right, this is hardly true. They tend to make bad decisions and will struggle to do their job effectively.

They will also put down others and criticize them to compensate for this behavior and elevate themselves.

For example, let’s say your manager struggles with time management. They may end up pressuring your team to commit actions that result in projects being late. Ultimately, this will impact the performance of the team.

Toxic managers often focus on their own careers and advancement over those of others. 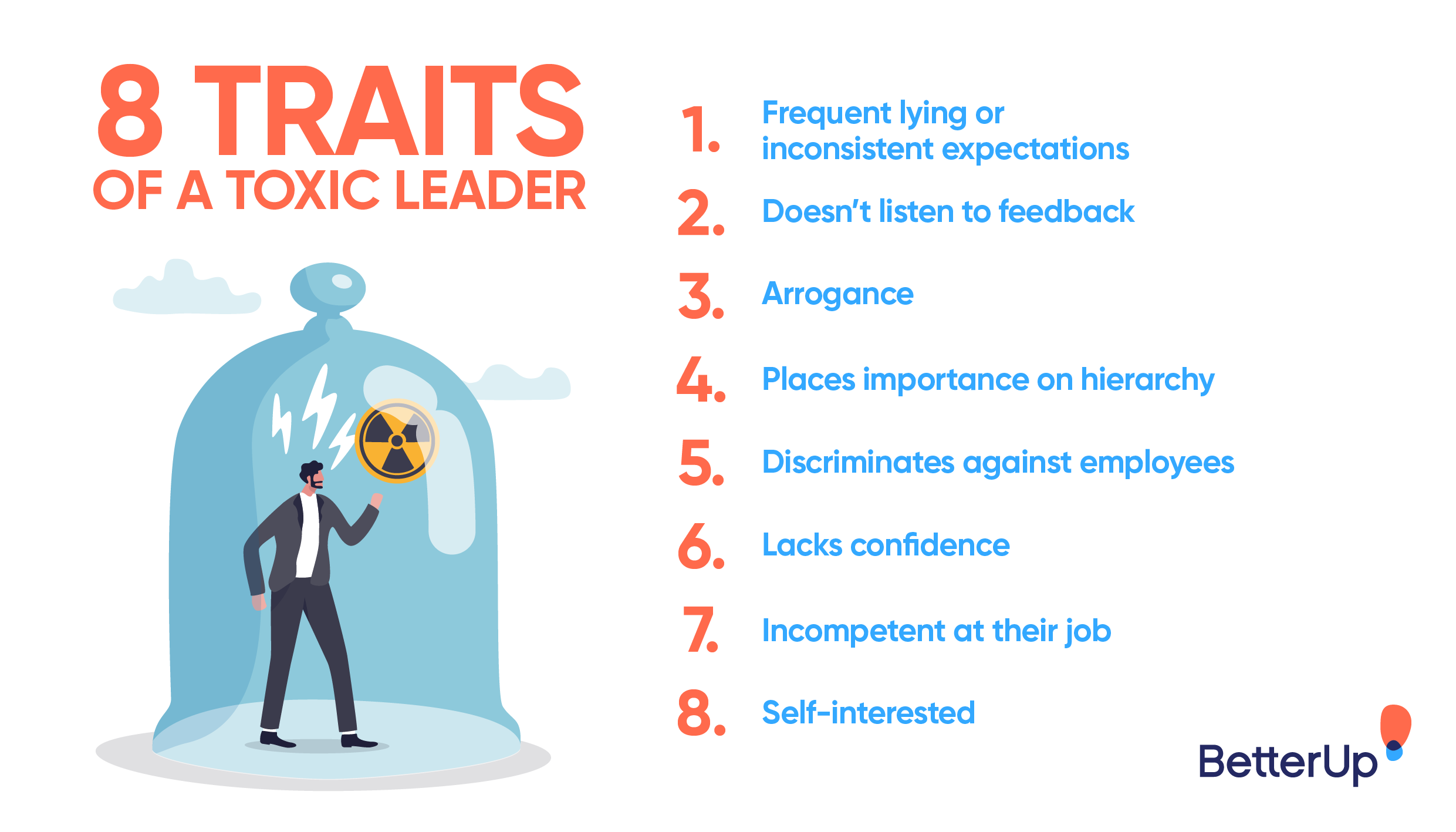 It’s easy to think that if a leader is toxic, it wouldn’t be a problem for long because you and your team wouldn’t let this go on.

But there is pressure to put up with this behavior since you want to keep your job and advance your career. It’s not easy to be the first person to stand up to a toxic leader.

As a result, toxic leaders often get tolerated for long periods of time.

2. Toxic leaders are easy to spot

A toxic person can still be a charismatic leader, which means they are able to hide their toxicity. This makes it so that they’re not always easy to spot.

Although they’ll exhibit some of the traits mentioned above, they won’t always do so explicitly or out in the open. Some toxic behaviors can be more subtle than others.

For someone who doesn’t work directly with a toxic leader, it may be difficult to see through their disguise.

3. One person cannot deal with a toxic leader on their own

This is not always true. If everyone believes they cannot deal with a toxic leader, no one will ever speak out, and the problem won’t be resolved.

Fear of standing alone is exactly why several people in a team often tolerate toxic behavior.

But often, all it takes is for one person to be willing to speak out. Once that happens, others will find the courage to speak up as well, and you can start dealing with the issue together.

4. Leaders need to be toxic to advance their career

Corporate positions are competitive, and many people believe they need to adopt toxic traits to ‘make it.’

But toxic leaders have destructive behaviors that aren’t good for the organization, especially in the long run.

It is possible to be an exceptional leader without being toxic and while still advancing in your career.

In some cases, toxic leaders may not realize what they are doing.

Their behavior can be a defense mechanism against their own self-doubts. This means that some toxic leaders have the ability to change over time. 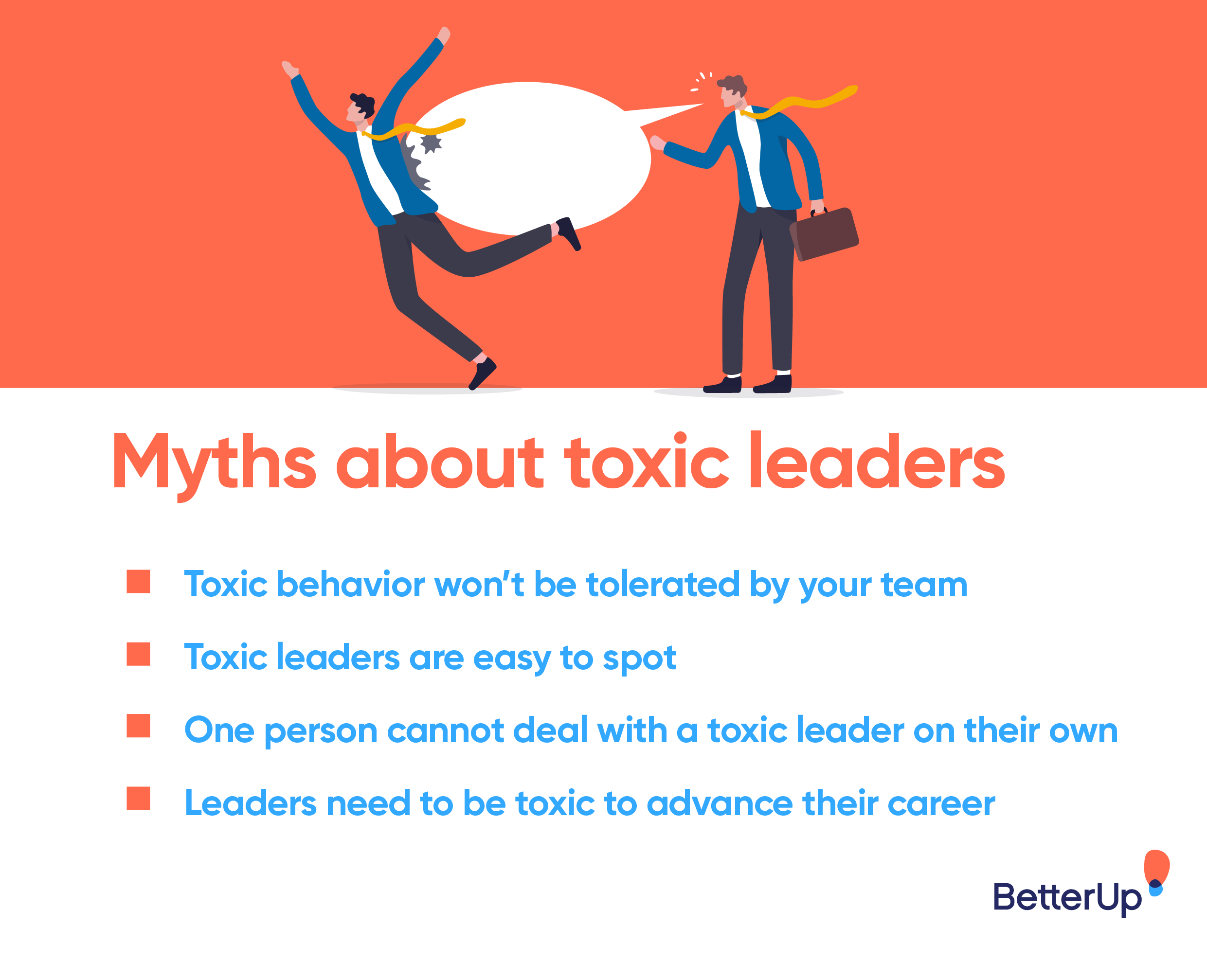 How to deal with a toxic leader

If you do happen to work under a toxic leader, here are seven tips for dealing with them.

1. Attempt to help instead of judge

Help others around you achieve more and drive results.

You can focus on thriving together as a team instead of spending time on drama.

If you can’t avoid the toxic behavior, at least you don’t have to focus on it and give it all your attention.

2. Keep control of your reactions

You can’t control how your manager acts, but you are in control of your reactions to those actions.

Remember that this behavior isn’t about you. Stay in control of your emotions and don’t give them the attention they want.

If you’re struggling to do this on your own, consider asking your HR department for help.

Document when your toxic leader makes requests you don’t agree with. This way, if there is a fallout, you’ll have proof that you were asked to do certain things that led to this fallout.

Always ask for a written confirmation via email before you complete a task that you don’t agree with.

Keep the relationship between you and your leader professional.

You have no obligation to befriend your leader or answer personal questions. By doing this, you’ll protect yourself and your personal life from toxic behavior.

5. Approach your manager with a candid conversation

Although toxic leaders won’t always be open to this type of conversation, you can attempt to have one.

The goal of a candid conversation is not to accuse but rather to air out how you feel and how your performance is being affected.

Approach it with “I” statements and explain how this doesn’t just impact you, but the company as well. Remember, your happiness and performance affects the overall performance of the company.

Don’t make assumptions about what you believe your toxic leader wants. This may lead to misunderstandings.

Ask for clarifications (in written form) whenever you have even the smallest of doubts.

7. Focus on your job and forget the ego

Remember not to take things personally. A toxic leader’s behavior is not a reflection of you and your performance.

You won’t be able to prove that you're right and your toxic leader is wrong, so don’t try to do so.

Is it possible to detoxify a leader?

You can help a toxic leader become less toxic, but that’s not always the case.

Your manager needs to be at least somewhat open-minded to hearing your opinions and receiving constructive criticism.

If your leader isn’t open to this, then they won’t change, no matter what you do.

Remember that it’s not your responsibility to help someone change.

Thrive in your career despite toxic leadership

Now you know what to look for when trying to spot a toxic leader, as well as how to best deal with them.

Remember not to take toxic behavior personally. Instead, focus on your work and help others on your team by becoming a positive leader yourself.

Learn how to combat toxic leadership and improve your leadership skills with BetterUp.

How to become a great leader: 10 tips, 7 traits, and 5 challenges

How do you develop leaders for the 2021 workplace?

7 key leadership behaviors you must have