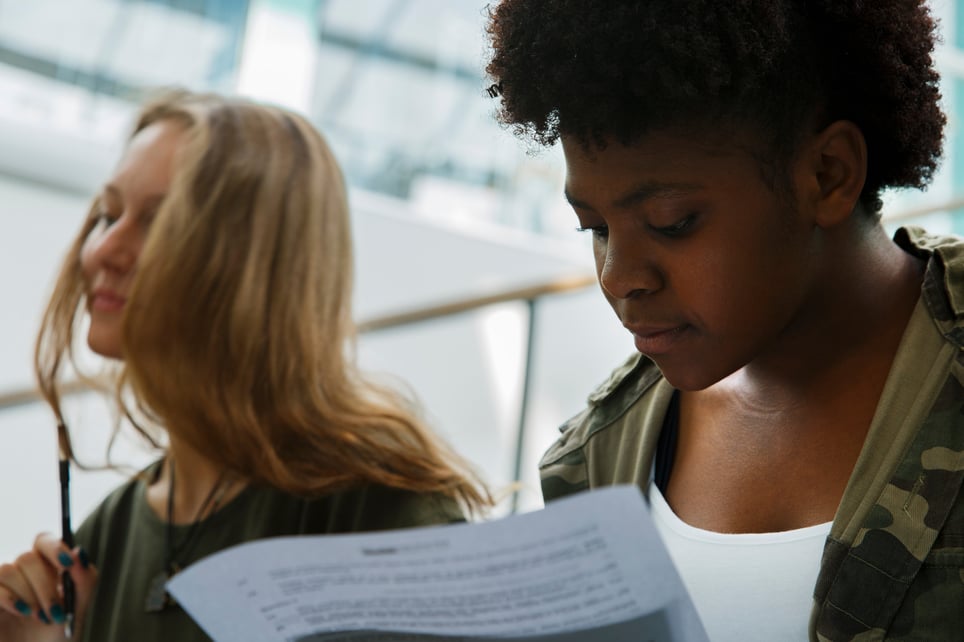 What is cognitive bias, and how does it impact our way of thinking?

What are the signs of a cognitive bias?

Why should you try to eliminate biased thinking?

As we go through life, we tend to think that we make decisions based on objective information and events that have happened.

We also tend to imagine that our brains work like tiny but powerful supercomputers. We imagine they take in facts and make rational judgments.

But the truth is a little more complicated than that.

While we think we're objectively taking in information, the truth is otherwise. There are several cognitive biases that can alter how we make decisions. These biases can lead us to make inaccurate judgments. And also make us behave in irrational ways.

Let’s take a look at some common forms of cognitive bias and how we can overcome them.

What is cognitive bias, and how does it impact our way of thinking?

At their core, cognitive biases are our brain’s attempt to be efficient and make decisions quickly. They serve as mental shortcuts so that our brains can speed up information processing.

They help us more quickly make sense of what we’re seeing and move on to make a decision. In this sense, they're considered an “adaptive tool.”

These mental shortcuts exist to make our brains more efficient. But instead, they can create systematic errors in our way of thinking. This is because they rely on our perceptions, observations, and experiences and not on actual facts.

In reality, we see the world through our own set of filters and make decisions based on them. It’s important to acknowledge that these filters aren't “factual.” Instead, they reflect our own particular perceptions and experiences.

These biases can lead us to avoid information that we don’t like or don’t want to see. Additionally, they can cause us to see patterns that don’t exist.

While many of the cognitive biases we experience are unconscious, we can take steps to avoid them. Before we can delve into avoiding cognitive biases, we need to understand these biases and where they're most likely to show up. 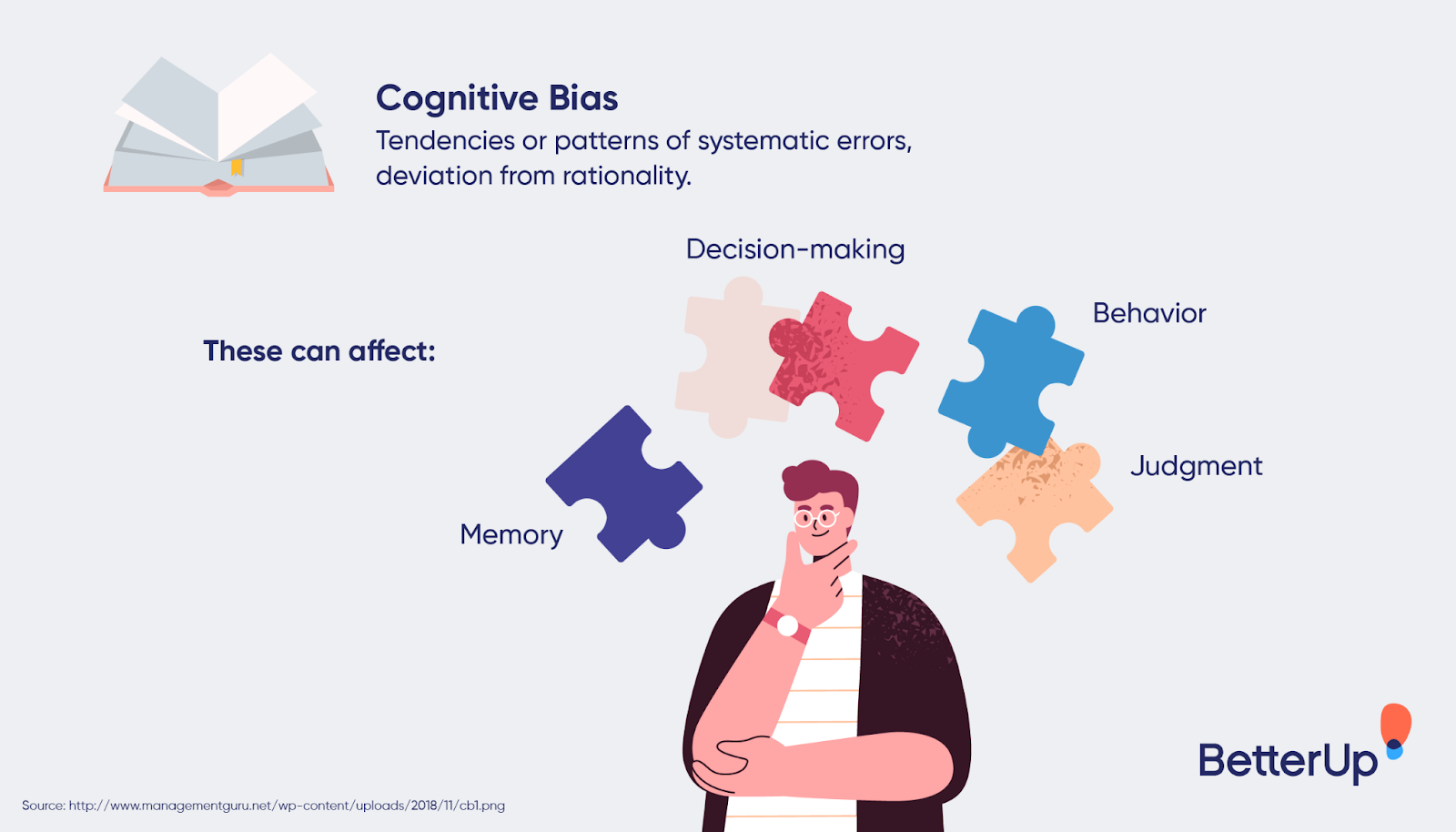 What are the signs of a cognitive bias?

There are some sure signs we can tune into that help us determine if a cognitive bias is interfering with our decisions.

Although these signs might be easier to spot in others, we can work to recognize them in ourselves.

Signs that you could be experiencing cognitive bias include:

Amos Tversky and Daniel Kahneman first introduced the idea of cognitive bias in 1972. They demonstrated that people often made judgments and decisions that weren't rational.

There is now research across the fields of social psychology and behavioral economics confirming dozens of cognitive biases.

Usually, these cognitive bias examples are due to ignoring relevant information. Or they’re due to giving weight to an unimportant but salient feature of the situation.

Let’s look at some common biases that receive the most research attention and have the greatest impact on how we navigate the world:

You've probably met someone who thought they could do anything. That's an overconfidence bias.

This is when you hold a false idea about your level of talent, intellect, or skills. It can be quite a dangerous bias that can have disastrous consequences in some scenarios.

It could be overestimating your driving abilities on the highway. Or it could be knowledge of the stock market while investing.

This bias is closely related to an optimism bias, which is thinking that you’re less likely to experience a negative event.

An overconfidence bias is pretty much the exact opposite of imposter syndrome. 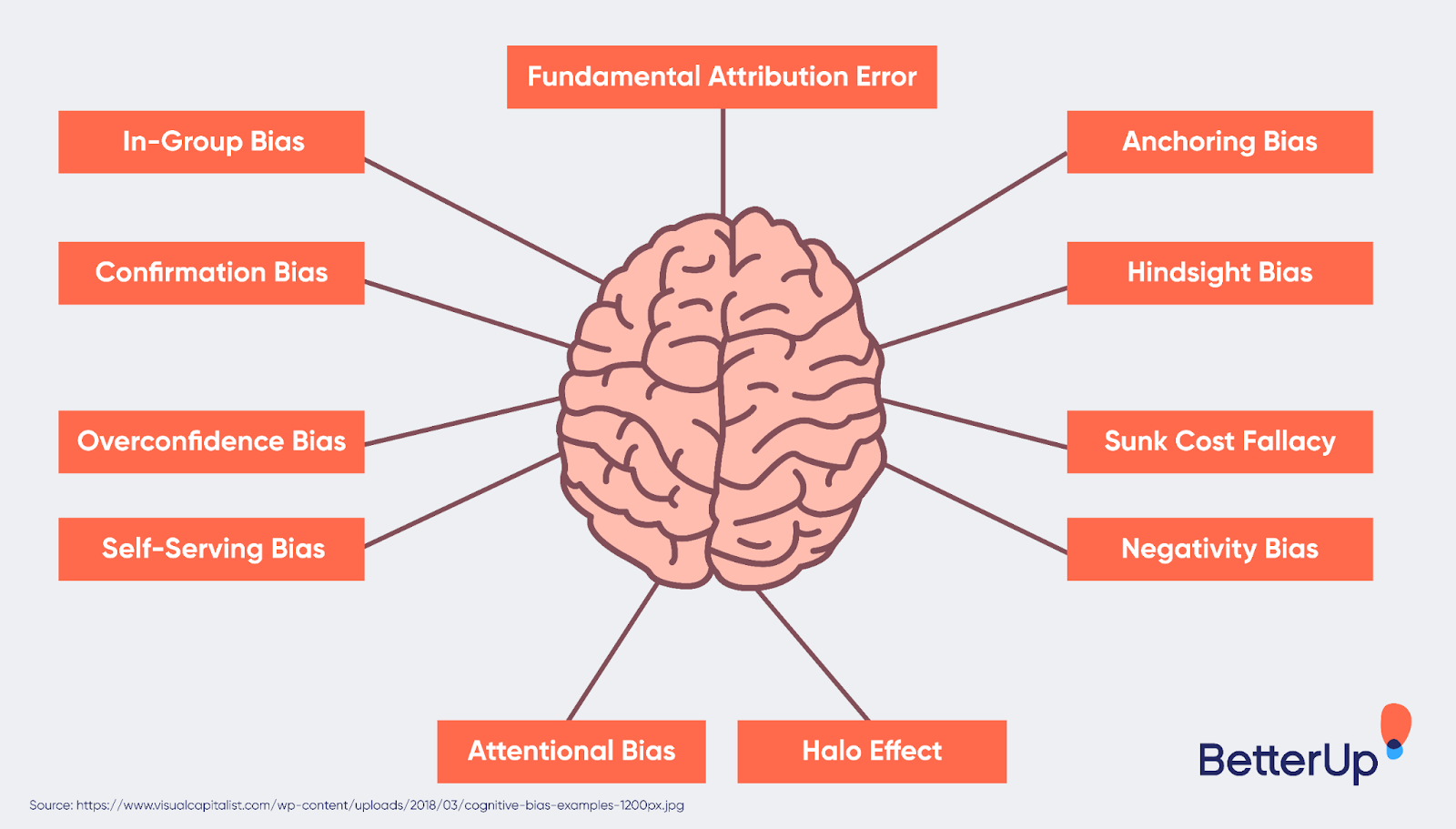 Why should you try to eliminate biased thinking?

There are a number of reasons we should strive to eliminate cognitive biases and biased thinking.

While cognitive biases can be unconscious, there are a number of things we can do to reduce their likelihood.

The first tip to overcome these biases is to acknowledge that they exist. When we know there are factors that can alter the way we see things, we're more likely to be careful as we form judgments or make decisions.

2. Consider current factors that may be influencing your decision

Is there anything in the current situation that could lead you to feel overconfident in your convictions? Or cause you to ignore certain information? Make sure not to fall victim to the bandwagon effect, or adopt attitudes simply because others are.

3. Reflect on the past

Look for patterns in how you've perceived prior situations and where you might have made mistakes. If, for example, you see that you tend to ignore facts or overemphasize intuition. Then lean into opportunities to further explore data presented to you.

Being curious can help us avoid cognitive biases. Curiosity can help us pause long enough to ask questions. It stops us from assuming we're right.

5. Strive for a growth mindset

People with growth mindsets believe that cognitive ability can be developed and tend to learn from criticism. Rather than covering up mistakes, they see them as an opportunity to learn.

They don’t believe that factors are “fixed” or unchangeable. Cognitive bias modification is possible with some work and effort. A growth mindset is one of many heuristics that can help move you in the right direction.

6. Identify what makes you uncomfortable

Are there people or situations that rub you the wrong way? Ask yourself what makes you respond this way and whether you could have a bias that's impacting your perspective.

Trying to understand an issue from both sides can make you a stronger critical thinker and help you see the world with more empathy. Push yourself to believe the opposite of your initial reaction and pay attention to what happens.

Solicit feedback and perspectives from others. Asking others for their input can help us find potential blind spots and stop us from being overconfident.

Go out of your way to seek out information that runs counter to your existing belief.

Intellectual humility is about remaining open to the idea that you might be wrong. Rather than blindly standing by our convictions, it’s about asking, “what am I missing here?” 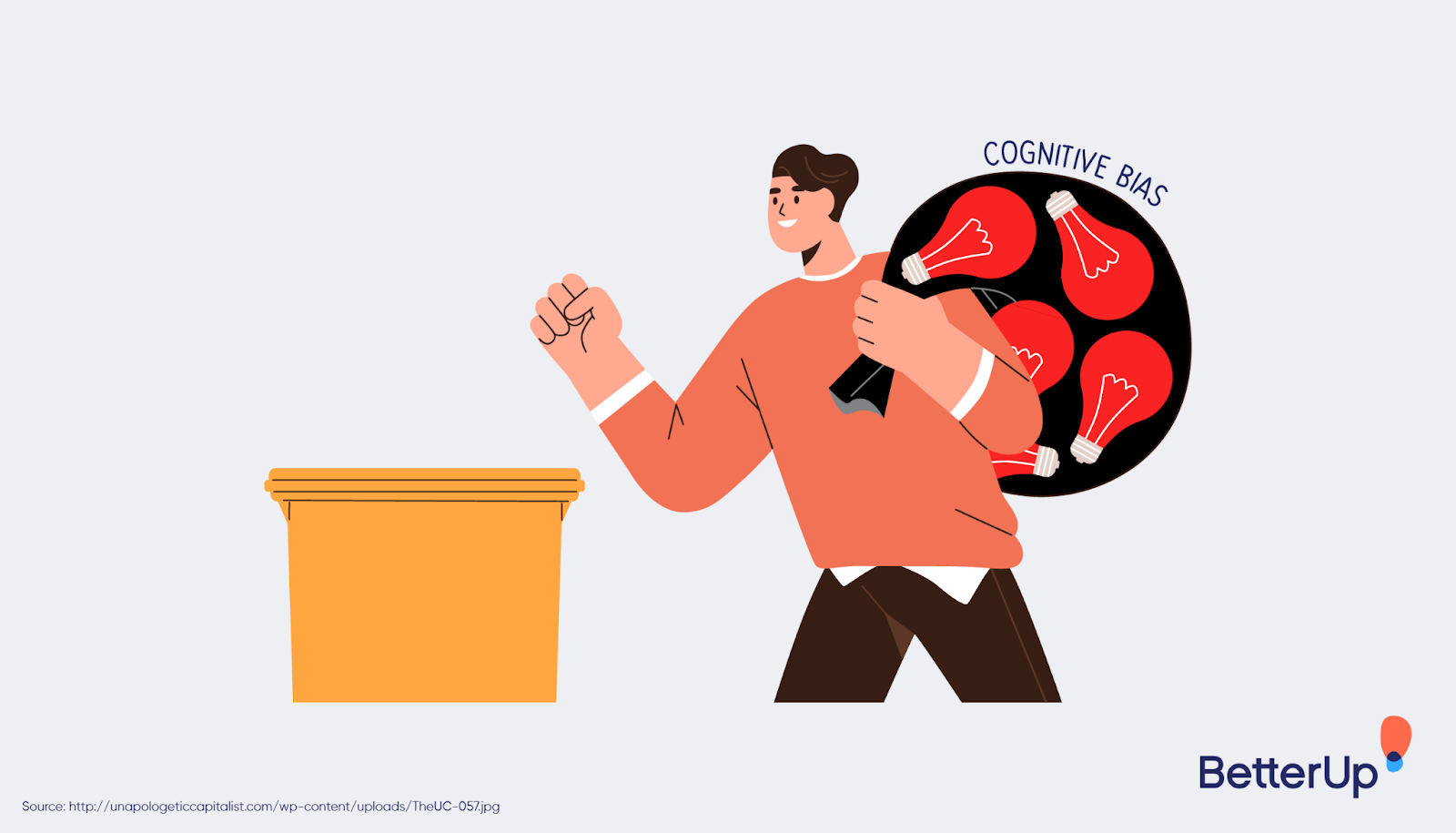 We all have cognitive biases. But there are proactive steps we can take to reduce their negative impact on our judgment. Doing so will help us improve our relationships and make better decisions.

BetterUp can help your team create a more inclusive culture with less cognitive bias. See how BetterUp works by requesting a customized demo.

Give your brain a workout: 10 concentration exercises to up your focus

With concentration exercises, you can build your focus and strengthen concentration skills to sharpen your cognitive abilities. Read More
Well-being
10 min read | July 15, 2020

Learn why cognitive agility matters and what exactly it is. Here are evidenced-backed ways to approach challenges with a growth mindset and adaptability. Read More
Research & Insights
6 min read | July 5, 2022

As we begin thriving cognitively, emotionally, and socially, our focus shifts from working on ourselves to making an impact on others. Read More
Well-being
17 min read | October 24, 2022

Cognitive dissonance happens when our actions misalign with our personal values, leading to stress and discomfort. Learn its causes and how to reduce it. Read More
Well-being
16 min read | June 15, 2021

What is cognitive flexibility, and why does it matter?

Learn what cognitive flexibility is, why it’s important to practice it for your career and your personal life, and four tips for how you can improve yours. Read More
Research & Insights
7 min read | February 9, 2022

With age comes resilience and optimism, despite physical and cognitive declines

Despite physical and cognitive decline, the data shows we grow in resilience and optimism as we age. This results in higher levels of life satisfaction. Read More
BetterUp Product
12 min read | November 10, 2021

To perform at our peak, we need to thrive physically, emotionally, cognitively, and socially. We also need rest, healthy habits, a sense of belonging, and resilience. What if... Read More
Professional Development
16 min read | March 10, 2021

Social conditioning creates biases that hold women back from leadership roles. Learn how to overcome and create a work environment that empowers all people. Read More