How to disagree at work without being obnoxious

When should you speak up at work?

How to disagree with someone at work

Collaboration doesn’t always mean that everyone agrees. No matter how well you get along with your colleagues, there are bound to be times when you have a difference in opinion.

Not only is this perfectly normal, it’s also a great thing. Teams that work together benefit from productive conflict. Adam Grant says, “If two people always agree, it’s a sign that at least one of them isn’t thinking critically — or speaking candidly. Differences of opinion don't have to be threats. They can be opportunities to learn.”

Still, it can be nerve-wracking to speak up when you have a different opinion — especially when it seems like everyone else agrees with each other. Read on to learn how to disagree respectfully and productively at work.

What is a healthy disagreement? Wouldn’t it be better for everyone to just get along?

In truth, you don’t have to choose one over the other. Healthy relationships — whether with family members or coworkers — mean that people can disagree and get along. The secret ingredient lies in how they communicate their disagreement.

Being able to disagree with your colleagues — and even your boss — is a sign of a psychologically safe workplace. Psychological safety is an important component of belonging. It means that people feel comfortable not just disagreeing, but collaborating, taking risks, and asking for help.

Most of us can easily spot an unhelpful disagreement or signs of a toxic workplace. But what does a productive dispute look like? Here are some signs:

When should you speak up at work?

It can be hard to know when you should step up and say something at work, especially if difficult conversations in the past haven’t been very productive. In worst-case scenarios, you may even feel like speaking up may put your job at risk.

If you’re in that type of work environment, you may find that you need to be very careful about how you bring up any form of disagreement. When workplaces are toxic, the tension often impedes conversation. A genuine concern may come out sounding like a challenge.

If that’s the case, consider bringing up your questions via email. It's a smart way to communicate when you're worried about how you'll come across. You’ll have a little more time to consider both your initial message and your responses. If your manager does take it as a personal attack, you’ll benefit from a paper trail.

However, if your workplace is open to communication, you shouldn’t have to worry about asking questions or bringing up your concerns. When I feel like the environment I’m in is receptive to feedback, I often find that speaking up is a matter of overcoming my own nerves. Usually, there’s a little inner voice that begins to speak up before I do. I’ve learned to trust that it has something valuable to say.

When you share your thoughts, opinions, and concerns at work, you do much more than make yourself heard. Productive conflict has the following benefits:

How to disagree with someone at work

So how do you let someone know you don’t agree with them while keeping everyone calm? Here are some strategies on how to disagree respectfully without becoming “that person.”

It’s just business — but that doesn’t mean that workplace disagreements don’t often feel personal. If it’s a topic that you feel particularly passionate about (or a colleague you have a history of disagreements with), avoid bringing up your concerns in public. You may have an easier time (and be less likely to trigger pushback) if you schedule a time to talk with them privately.

If you’re too upset to regulate your own feelings about it, take the time to write out your concerns beforehand. This can help you release some of the charge around your feelings (so they don’t come out when they’re not expected).

Before you disagree with what’s being said, it’s a good idea to make sure you understand what they’re saying. Rephrase their idea for clarification. You may find that you misunderstood what they said, and that you’re actually on the same page.

If not, asking questions is a useful first step in opening a discussion. It can help create a foundation for you to challenge their point of view and gives context to your point.

Colleague: “I think we should aim to finish the project within a week.”

You could now interject in one of a few ways:

Option A: “A week? That’s not enough time. We already have a project due next week.”

Option B: “I have a question. Did you mean a week from now or a week after the project officially launches? I wouldn’t be able to start working on this until at least next week.”

With Option A, you risk putting your colleague on the defensive. Just as importantly, though, you don’t provide enough context for your point. That doesn’t mean that you have to throw the kitchen sink at them. But adding your concern helps to keep the conversation solution-oriented. Option B clearly states the concern, guiding the conversation towards a resolution. 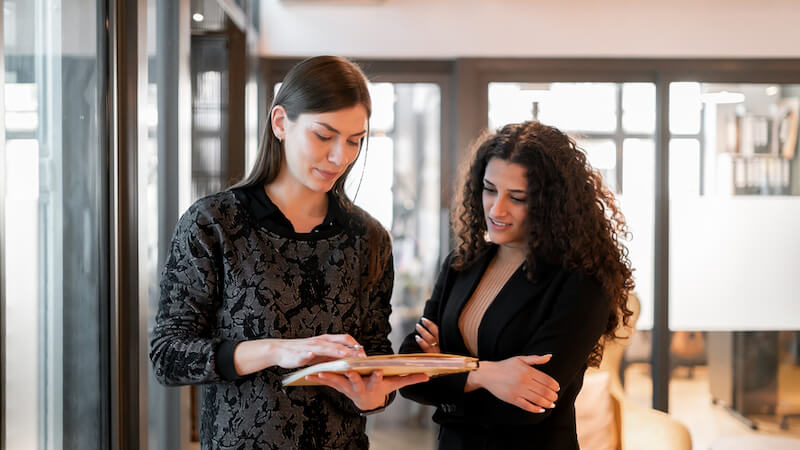 3. Look at your intentions

What do you hope to get out of disagreeing? Your intentions should be clear. You might have a question, a new idea, or a concern about moving forward. When you’re clear on why you’re speaking up, the conversation stays positive and productive.

One way to avoid this is to be mindful of the words you choose. Try not to use terms like “stupid,” “rushed,” or “silly.” Adjectives like these can be easily taken the wrong way. If you stick to a central point, you can make your counterargument without making enemies.

5. Get in their shoes

Most of us aren't raised with excellent confrontation skills. For most of us, differences in opinion often turned into name-calling, heated debate. By the time the conversation ended, you probably completely forgot what the main point was.

Know that if you're nervous about speaking up, it's likely that the other person feels the same way. Show respect for their perspective, their ideas, and the effort they put into presenting them. If you take a moment to look at the conversation from the other person's perspective, it will go a long way towards helping you find common ground.

Disagreeing with your boss

Sharing a difference of opinion with a manager is the same, but with two important caveats. For one, the stakes will feel a lot higher. You’ll likely be nervous about possible negative repercussions.

Don’t give into this. It’s rare that someone gets fired for politely disagreeing with a manager. If you’re really worried or the conversation needs more time, you can always ask for permission to disagree. Try saying, “I’m not sure that this plan is the right way to go, but I think I have a good alternative. Can I schedule some time to run it by you?”

The other caveat is that your boss has the power to veto you. You could present a thoughtful case that makes sense, and your manager could say “Great, but we’re still going to do it the other way.”

At that point, there’s not much you can do. It’s really important, then, to revisit your original reasons for disagreeing. If you’ve clearly communicated your point, then it makes sense to move on. If you have concerns about how things will move forward, see if you can address those within the parameters of the original plan.

Let’s revisit our example from earlier:

Manager: “I think we should aim to finish the project within a week.”

Your response: “I have a question. Did you mean a week from now or a week after the project officially launches? I wouldn’t be able to start working on this until at least next week.”

Manager: “No, this is a higher priority. We should work on this first.”

Even though your manager just disagreed with you (and you with them!), you’re closer to a resolution. You can follow up — either immediately or later on — with new timelines for the projects at hand.

Disagreement is a normal part of any healthy relationship — and that’s not the same as conflict. Learning how to disagree respectful makes you a better communicator and a better leader.

It may be nerve-wracking, but if you’re clear on why you’re disagreeing and try not to take it personally, it’ll become second nature. You’ll know when — and how — to speak up, and your team will know they can trust you to say what needs to be said.

Do you suspect you have a micromanaging boss? Use this guide to identify their habits and navigate potentially difficult conversations around micromanaging Read More
Employee Experience
2 min read | December 9, 2020

Hear from a BetterUp Member on learning to develop communications skills, be authentic, and own the spotlight. Read More
Employee Experience
2 min read | December 10, 2020

Member Story: Career Development and Shaping My Future with Intention

Hear from a BetterUp Member on her coaching journey to think flexibly about how to leverage her background and expertise in a new context and more broadly, how to shape her... Read More
Employee Experience
13 min read | January 12, 2022

Merit increase — what is it, and why does it matter? Find out 4 reasons why your organization needs merit increases and start calculating your impact. Read More
Employee Experience
7 min read | February 3, 2022

Feeling connected to the team is a top factor for job satisfaction, but the data shows a discrepancy between managers and ICs when it comes to belonging Read More
Employee Experience
23 min read | March 24, 2021

Winning at WFH: What to ask a manager when you’re working from home

Learn how to use the right questions to create a relationship with your manager. This connection helps avoid workplace dilemmas and further career goals. Read More
Employee Experience
11 min read | January 7, 2022

Neurodiversity is an oft-overlooked component of DEI - but it can be an important untapped resource. Learn how neurodivergence can help your team thrive. Read More
Employee Experience
14 min read | June 28, 2022

Trends in the Federal workforce: A review of the 2021 FEVS

How to use workforce development to close the skills gap