How stress and anxiety impact performance

The cost of pressure on performance

What is performance pressure?

Most of us have never competed in the Olympic Games, but we know what it's like to work under pressure. It's not uncommon for people to push past their limits — or at least their perceived limits — in order to deliver in a high-pressure situation.

In some ways this is great. In fact, the outcomes that people are able to achieve when up against a deadline lead many to say, “I work better under pressure." However, the idea that the looming deadline, last-minute scramble, or superhuman effort improves performance is a fallacy — and a destructive one at that. There is no evidence that we work better under pressure. In fact, working consistently under pressure and stress can erode our mental health and well-being.

Unfortunately, prioritizing our mental health is not normalized, especially at the highest levels. That conversation is changing. Simone Biles’s actions at the 2021 Olympic games showed the world what it looks like to speak up, take action, and take care of your mental and physical health when you know you need to.

Perhaps most of all, Simone showed what it looks like to know yourself and to really understand how your own performance works.

While many high-profile names have helped ignite a global conversation about mental health, Simone and other athletes have sparked another conversation as well: about the connection between performance pressure and the ability to actually deliver — for athletes and the rest of us.

Performance pressure has typically been seen as a necessary part of performing at a high level. We told people that in order to excel, they had to learn to deal with pressure —  and that the way they handled it would make or break their career. We never talked about whether the pressure would make or break them. People are taught and coached to succeed. Far fewer have been taught how to fail and bounce back. In the process of prioritizing success, we have pretended that our performance is separate and disconnected from our well-being.

The connection between performance and well-being

We know there is a connection between mental health and physical health. Sleep, nutrition, exercise, and even water intake have measured and proven impacts on our overall well-being. The connection goes both ways. If we feel physically ill, our mood, stress tolerance, and resilience suffer. When we're under stress, it often shows up as inflammation and illness in the body. The connection between mind and body has been proven. So, why are we not talking more about the mind-performance connection?

Interest in the social science of performance and well-being isn't new. During the Industrial Revolution, employers focused on maximizing productivity — factories were a dangerous place to be. Henry Ford is best known for revolutionizing the assembly line, but that wasn't his only contribution to the modern workplace. He also standardized the (shorter) 40-hour work-week and increased employees’ weekly wages. Incredibly, when work hours went down and pay rates went up, efficiency and productivity skyrocketed.

The insight about worker well-being and productivity led to innovations like employer-sponsored health insurance but has been slow to translate into holistic well-being for employees. Of course, Ford’s employees were “just workers,” their performance measured as units produced. And, 100 years later, we still treat higher-level performance as something elite, attained and maintained through endurance, toughness, and sheer force of will.

Yet we know that human beings are more than just their talent, skills, knowledge, abilities, and strength. They feel stress. They feel doubt and fear. They get distracted and frustrated. They get excited, hopeful, and inspired. It affects how they show up and what they do.

We are starting to recognize that talent, skills, strength  — these factors are only one part of what is necessary for performance — the other part is mental fitness and resilience.

Just as top athletes prioritize their sleep and nutrition as an integral part of high-level physical performance and recovery, it is important that we recognize mental fitness, resilience, and overall well-being as a non-negotiable part of showing up at our best, in our own Olympic moments and day-to-day.

How stress and anxiety impact performance

In July 2021, we asked 1,693 nationally representative US workers “How often does your performance at work suffer due to challenges with anxiety, stress, or other performance-related mental health issues?” We found performance pressure and stress are widespread.

This, undoubtedly, has a tremendous impact on productivity and the quality of work. It also affects their ability to perform over time and to achieve more job, and life, satisfaction. The sense of struggling to meet performance expectations creates additional stress and pressure that can further undermine productivity and performance and damage physical health.  Performance pressure and poor performance can become a reinforcing downward spiral. 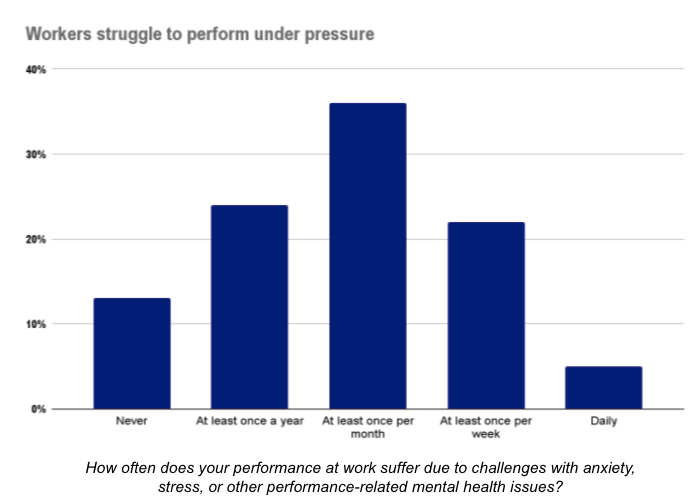 The cost of pressure on performance

If US workers are struggling this much, what might the cost be on actual performance? Likely in several ways — productivity, quality, and lost innovation.

While companies seek to better understand the return on investment of their well-being initiatives, it’s becoming clear that the only way to move forward and create productive, innovative, creative work environments is to invest time and resources in the mental fitness of our employees.

Based on the numbers, chances are that someone you know — someone on your team, someone you manage, or maybe you yourself — is struggling with performance pressures. It’s affecting their work (or soon will be). And this probably isn’t news.

So why do we act like this doesn’t exist?

We have to start normalizing this conversation in teams and at the leadership level to challenge the idea that performance is gained by sacrificing our mental fitness and well-being. Or that sucking it up and pushing through is a badge of honor and a ticket to the top. Pressure doesn’t make people better — in fact, the evidence indicates that it makes them worse. Support, psychological safety, communication, trust — these are the things that empower people to show up and perform at their best.

How to reduce pressure and increase performance 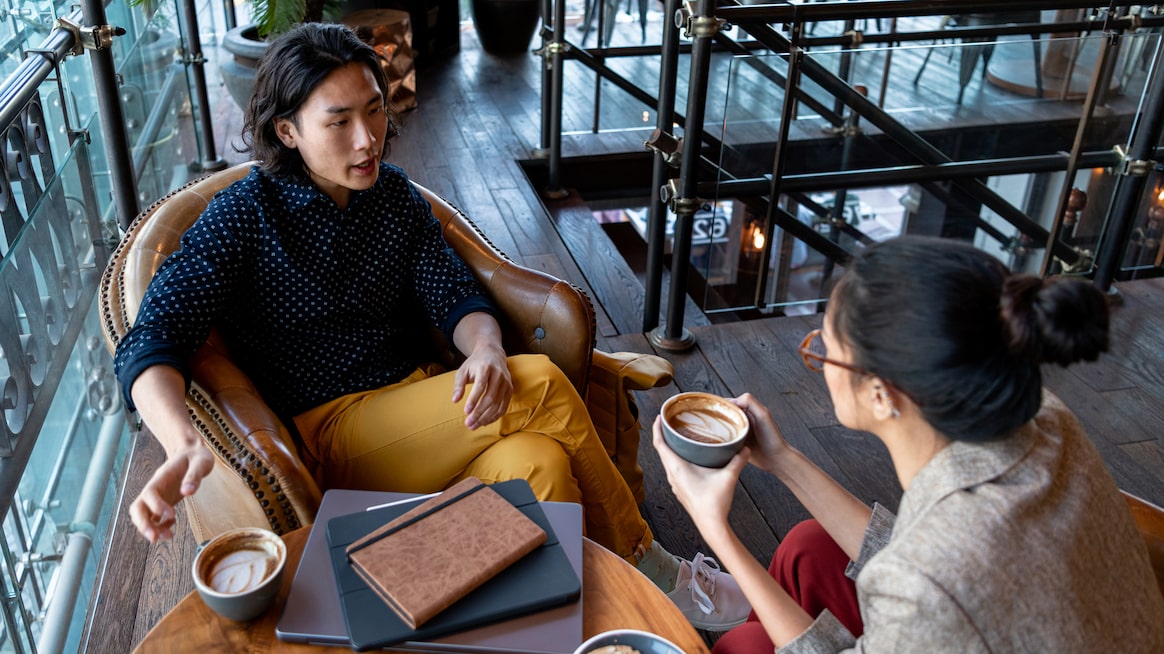 A key part of opening the door for this conversation in workplaces around the world is to look at what it means to create psychologically safe cultures. It also depends on seeing leaders act in ways that prioritize their own mental fitness and that support the mental fitness and well-being of every employee in the organization.  That doesn’t mean throwing productivity out the window. That means taking a longer view of performance and making sure that the organization itself is normalizing employee well-being and mental health as a key factor in every decision.

Performance and well-being are not mutually exclusive, and they don’t exist in spite of one another. Trees don’t bear fruit without water and sunshine. Olympic athletes don’t perform without rest and care.

Simone was the one on the world stage, but her experience resonated with so many. The pressures that people feel to excel and perform are eroding their ability to actually do so. If we want to empower people to be their best, most productive selves, we have to see them as our most valuable resource — and one worth taking care of.

What happens when organizations care about well-being?

Overall, when organizations care about well-being, the benefits return in the form of a more highly engaged workforce, that is more committed to the organization, better able... Read More
Well-being
4 min read | February 24, 2021

The resilient bounce back stronger

Global pandemics create disruption and stress in ways many of us have never faced before. But, on the other side of this, organizations can come out stronger. Read More
Well-being
5 min read | May 26, 2021

Why "fine" is good but not good enough

Our data shows that BetterUp Members are getting back to their previous level of well-being, pre-pandemic. But is that good enough? Many employees were struggling then, too.... Read More
Well-being
6 min read | June 15, 2021

We asked people, “How much do you think the pandemic has changed you, as a person, for better or worse?” Here's what they said. Read More
Well-being
7 min read | December 24, 2020

How to make your employee mental health strategy better? Focus on growth

American workers today face psychological challenges on every front. Research has shown we can develop tools to prevent against the threat to well-being. Read More
Well-being
6 min read | August 24, 2021

When we struggle, we can’t perform our best. We are less open and generate fewer and less-novel ideas. Stress and anxiety stall creativity and innovation. Read More
Well-being
6 min read | September 14, 2021

Considering all they have on their plates, it’s no surprise working parents are feeling the pressure this fall. Yet many don't feel support from their organizations. Read More
Well-being
10 min read | January 28, 2022

Stress is a inescapable part of our lives, but developing these six skills can help you mitigate its effects and improve your well-being Read More
Well-being
7 min read | February 1, 2022

Managing the effects of burnout not only prevents negative feelings, it promotes positive attitudes that have far reaching impact for both individuals and organizations Read More