How to handle gossip in the workplace and encourage communication 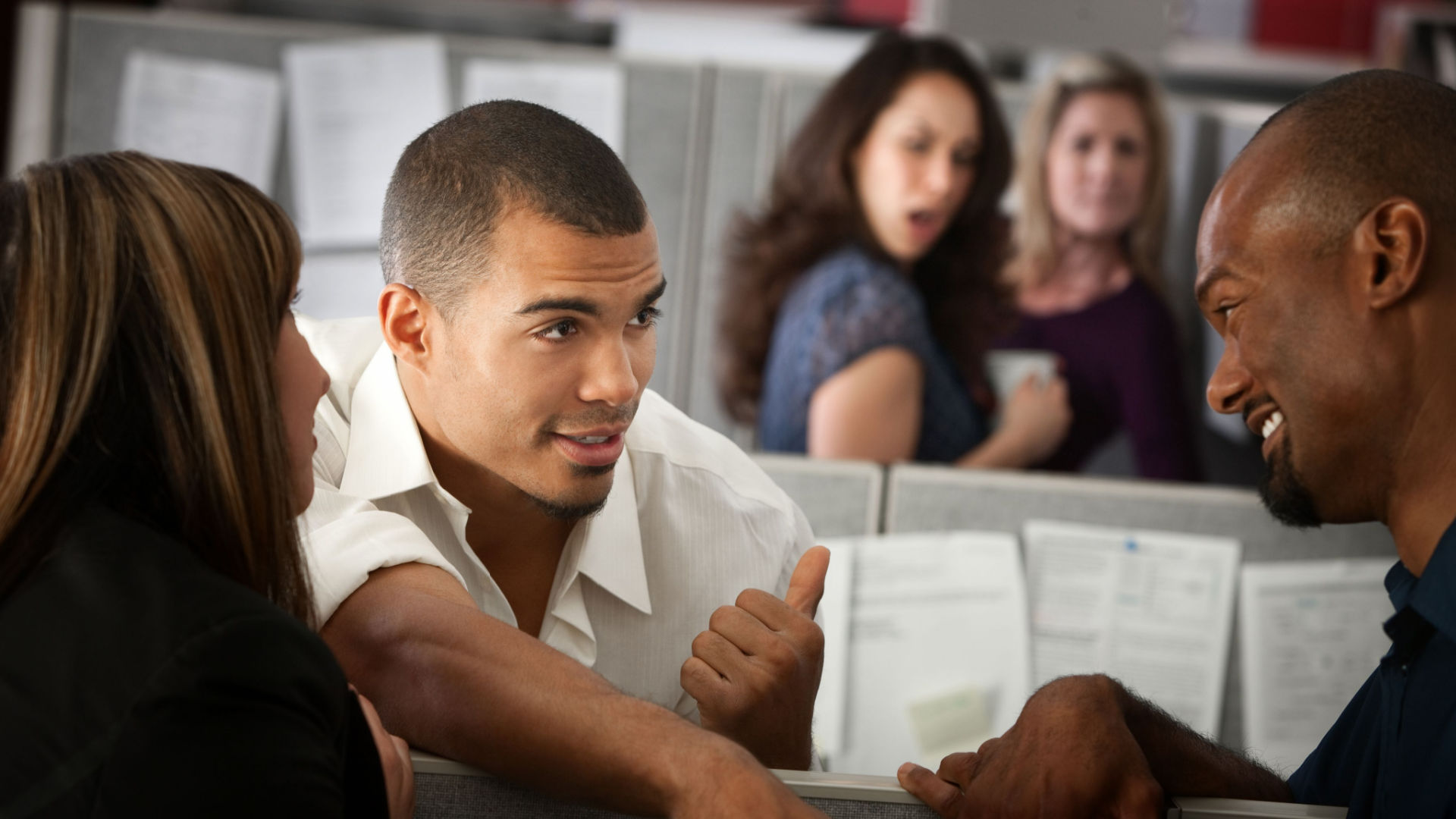 Workplace gossip is part of working in any organization. It is an almost unavoidable result of colleagues meeting and interacting regularly. Gossip gets a bad reputation (after all, no one likes to be the one talked about). But it isn’t always a bad thing. Gossip researcher Elena Martinescu found that gossip actually serves a useful function. She explains, “According to evolutionary theory, humans have developed gossip in order to facilitate co-operation in a group.”

Interactions between employees can signal an open, welcoming workplace. But when exchanges make up negative gossip, an organization can quickly develop a toxic work environment.

The negative consequences of workplace gossip

When negative gossip is common in the workplace, it can inhibit fruitful discussions. Rumors can strain trust between colleagues. Work quality is also likely be affected, and employee morale drops significantly.

Spending time on snide conversations can decrease productivity at work. An environment where gossip thrives tends to be a hostile one. So how do you get the positive, collaborative effects — with none of the high-school-esque trauma?

How to spot gossip in the workplace

When colleagues gather to speak, the nature of their discussions isn’t always clear. On one hand, it may simply be idle chit-chat or catching up on weekend activities. This makes it hard to identify when people engage in workplace gossip.

While it may be hard to pick out, it’s sometimes possible to spot gossip by looking out for the following behaviors:

1. The tone of the conversation

When workers discuss their personal lives, upcoming work projects, or other “neutral” topics, there is a common cadence. This talk often peaks at normal voice levels, and will likely stop after a short time.

With gossip, voice tones tend to be more hushed. These conversations will often stretch for some time as gossip is exchanged.

Rumors are also shared through digital channels. Beyond the water cooler, talk may spread via email, social media, and other avenues. What might start as small, negative comments about a colleague can quickly escalate into workplace gossip. There’s a very thin line between “just venting” and damaging your work environment.

2. Claims spring up without clear sources

Office gossip can suggest or sow seeds of bad news within the workplace. Talk of a potential layoff, news of unethical behavior, and other unpleasant stories will often pop up. But while this gossip moves around the workplace, it’s often hard to pinpoint where these rumors stem from. Attempts to find out will usually be stonewalled. One employee may point to another, and so on.

3. The topic of conversation is unaware

When gossip is exchanged, there’s little chance the subject is present to listen in.

These rumors are often hurtful or disparaging in nature. If you’re unsure, use this quick test. If the speaker would never be repeated if the target were aware, chances are good that it’s gossip. 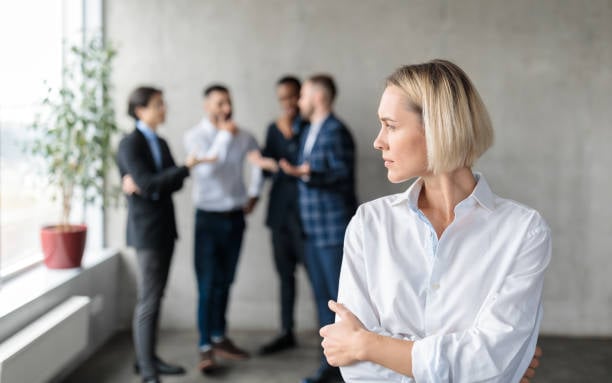 A culture of gossip can breed a toxic work environment. When people within the company are often the subject of unpleasant talk, it can erode trust and damage working relationships. Workers may begin to look at each other with suspicion and disdain.

Gossip breeds divisiveness in the workplace. The camaraderie between colleagues suffers when false claims routinely make the rounds. A harmful work environment can push workers to exit for their well-being.

To prevent the potential dangers of gossip, it is up to management to make necessary changes. The organization’s tolerance for gossip should be codified in its company policy or handbook. This strategy may be approached in the following ways:

Give gossip a definition

Because gossip can have different intentions, this practice can be difficult to describe.

Policies restricting workplace gossip should, however, be as clear as possible. Speaking about an absent person in ways that taint their image can be gossip. This also extends to negative talk about the workplace. These exchanges can be damaging to a company’s reputation.

For a clear idea of what gossip entails, examples of this act should be listed. Speaking ill of colleagues to other workers, sharing a co-worker’s private information, etc, can be provided as common instances.

Explain the results of this act

The policy should explain why gossip is controlled in the workplace. Its effects on employee relationships, esteem, and company attrition should be broken down. This gives workers a fair idea of the consequences of negative communication.

Dealing with difficult employees and situations can be challenging. Try to be as transparent as possible. Sanctions should be provided to show how seriously the office takes gossip. The company should penalize workers that routinely engage in negative office gossip.

But while it’s important to manage gossip, laws on worker relations should be consulted. HR professionals should ensure that policies against gossip aren’t too broad.

This policy should be carefully worded to permit worker associations as provided by the National Labor Relations Act. Employees are free to discuss workplace topics like better working conditions.

Also, while punishment can serve as a gossip deterrent, care must be taken. Extreme disciplinary action like firing an employee for gossip must be carefully considered. You don’t want to create an environment that punishes people for chatting with each other. In addition to creating an uncomfortable work environment, employees may feel that the company has something to hide. 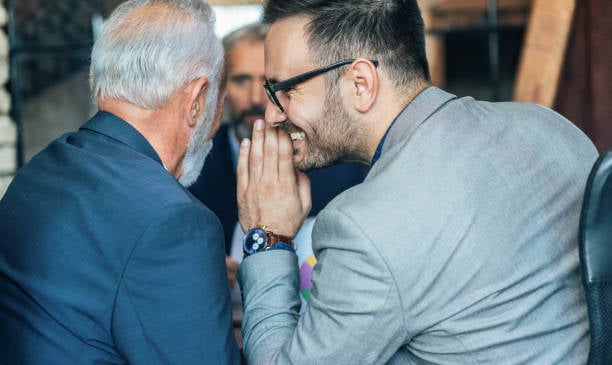 The effects of gossip on morale, work environment, and even the bottom line make this activity unwanted in the workplace. To prevent the negative impacts of gossip and avoid gaslighting at work or the expansion of office politics, proper measures must be put in place. The following are actions management can take to handle gossip:

A gossip-free work environment is an ideal goal for any organization. However, this may be an unrealistic target. Human nature craves the exchange of information. Although certain gossip is inappropriate and hurtful in the workplace, it is almost unavoidable.

To handle workplace chatter, managers can encourage the spread of positive news. This kind of employee appreciation can include promoting talk of a colleague’s career milestones, skilled task execution, etc. Managers should discourage team members from talking about details in another person’s personal life (although talking about oneself is fine).

2. Provide avenues for workers to air their feelings

Rumors can be curbed by providing the right channels to access information. Organizations may provide outlets like complaint boxes for workers to air out concerns. This grants a contained environment to discuss any issues in dispute.

Management can also operate an open door policy. Approachable superiors are a clear route to clarify information about the company. Accessible managers allow for open conversations about grievances or other worries at work.

Open communication channels about events in the office can help to limit gossip. Team bonding exercises are another way to improve communication in the workplace.

3. Set up training on the effects of gossip

The workplace culture around gossip can benefit from coaching on the subject. Workers should be given a picture of the impact rumors can have on colleagues and the workplace.

This training can also coach victims of gossip on appropriate next steps. They may be taught to speak up for themselves and ways to deal with difficult coworkers. Leaders can develop conflict resolution skills. Likewise, measures to curb these rumors — before they start — can be shared during sessions.

Through training, employees can work out what to do after hearing gossip. Workers can be taught to walk away, change the topic, or inform the right channels about the exchange.

After setting up a policy on gossip in the office, warnings can be given to offenders. These may come in the form of verbal or written cautions.

By providing discouragement against workplace gossip, management may contain the spread of rumors.

Is workplace gossip the symptom of a larger problem?

While a common feature of human nature, gossip can signal something deeper within an organization. When employees gossip, they could be discussing sensitive information about the workplace. This can occur when workers do not trust management to share details about the issue.

Workers may also gossip about a rude encounter with management or another colleague. This can take place where there are no avenues to address such exchanges. When employees have no official channels to air grievances, gossip may thrive.

To stamp out gossip, leadership should promote a culture that limits this behavior and work to improve team dynamics.

Management should also lead by example when it comes to restricting workplace gossip. By showing little tolerance for gossip, subordinates can learn healthier ways to communicate.

Workplace culture will gain from direct interventions to manage gossip. This means cautioning workers that engage in gossip. In serious, repeat cases, punitive measures can be raised.

When individuals get to know and respect each other, workplace gossip tends to evaporate on its own. Developing a psychologically safe workplace means people should feel free to talk to each other. But they should also feel intrinsically motivated to protect each other as well. Knowing that you’re safe — just as you are, good days and bad — is a key part of being able to bring your whole self to the workplace.

How to be an empathetic leader in a time of uncertainty

Empathetic leadership is crucial to running a successful team. Here's how to be an empathetic leader and tips and tricks to getting started. Read More
Leadership & Management
14 min read | March 23, 2021

Handle feedback like a boss and make it work for you

Why is it important to receive feedback and criticism the right way? Here we cover how to handle feedback and move forward in a productive way. Read More
Leadership & Management
10 min read | September 2, 2019

How to build a high performance team, according to Patty McCord

Uplift 2020: Ushering in a New Era of Employee Experience

What to get coaching on? Here’s what managers are saying

Wondering what to get coaching on? Coaching has been proven to improve a range of skills and abilities. Here are the areas managers say employees should focus on most. Read More
Professional Development
12 min read | March 4, 2022

Ready to be the boss? 10 steps to become a manager

Becoming a manager is tough. But once you do, the work can be gratifying. Here are 10 tips on how to land that leadership role. Read More
Leadership & Management
14 min read | September 23, 2022

Had a bad day? Here’s what to do when you mess up at work

Mistakes aren’t fun, but they don’t have to be career-ending. Here’s what to do when you mess up at work. Read More
Leadership & Management
11 min read | September 23, 2022

4 reasons to promote an employee into a new role

There are many reasons to promote an employee. Done at the right time, it helps your team grow. Here’s what to look out for and how to know they’re ready. Read More
Leadership & Management
14 min read | October 4, 2022

10+ interpersonal skills at work and ways to develop them

Strong interpersonal skills and key for leadership and employees alike. Here are 10+ ways to develop yours and those of your team. Read More