Breaking the glass ceiling at work and unleashing your potential 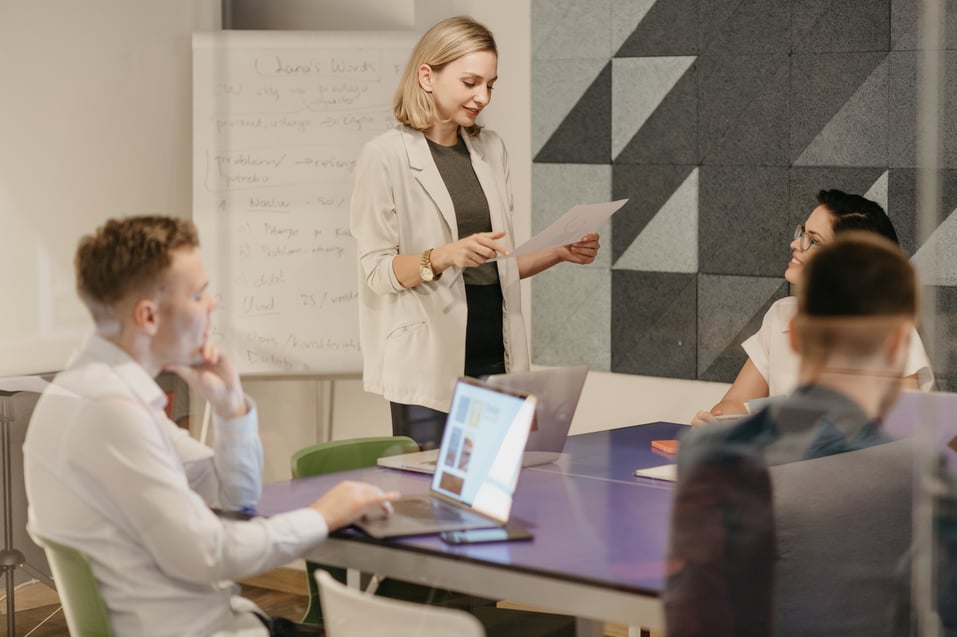 What is the glass ceiling?

The glass ceiling vs. the glass cliff

Why does the glass ceiling exist?

How can you shatter the glass ceiling?

How has the glass ceiling changed over time?

Upward, individually and together

If you’ve been denied a promotion or feel your career is stalling, it’s time to consider the presence of a glass ceiling at your workplace.

More importantly, we need to talk about breaking the glass ceiling and getting rid of it. It still persists in many workplaces today.

What is the glass ceiling?

"Glass ceiling" is a metaphor coined by management consultant, author, and diversity advocate Marilyn Loden back in 1978 to describe the invisible barrier that stops women from pursuing career advancements and growth. It's a form of discrimination that prevents even the most qualified and experienced women from seizing new opportunities.

Since then, the glass ceiling definition has been broadened. Now, "glass ceiling" encompasses the discrimination faced by minorities as well as women.

The glass ceiling hurts businesses, organizations, and all of society by limiting diversity. It creates a lack of representation for women and other minorities in leadership roles or decision-making and executive positions.

Say a company favors hiring men over women for senior management roles because they view men as more "capable" leaders. When the female applicants are just as knowledgeable and experienced as male ones, that's the glass ceiling in action.

The company doesn't have an explicit guideline barring women from senior roles, but unwritten rules and implicit bias lead to better outcomes for men.

Faced with the glass ceiling, working women are held back from learning new skills and gaining more experience. This in turn limits their career growth compared to men.

The glass ceiling vs. the glass cliff

As we talk about breaking the glass ceiling, we need to give attention to another term that's closely related but has its differences: the glass cliff.

A crisis could be when a company is nearing bankruptcy, experiencing a scandal, or during a recession.

Usually, women achieve those positions they've worked so hard for and are qualified to have. But the opportunities don't turn out how they hoped they'd be. They're thrown into a situation where the cards are stacked against them and people expect them to take the blame for any failure.

With the glass ceiling, women don't experience those opportunities. But the glass cliff seemingly welcomes them into a work environment where they've achieved career advancement and growth without offering a positive working experience for them. Instead, they’re martyrs.

The glass ceiling discriminates against people in many ways. You might experience it differently than someone else at an organization, but here are a few examples of the glass ceiling:

But let's hear it for some notable women who have broken the glass ceiling in their industries:

Why does the glass ceiling exist?

To break the glass ceiling, we must first dismantle each of its contributing elements. The elements are all connected and impact gender equality.

Gender roles are a social construct that happens around the world. Because of them, people follow certain stereotypical paths based on their gender in both their personal and professional lives.

For instance, many cultures encourage women to stay at home to parent rather than hold executive positions and enforce other gendered roles that don't make an inclusive workplace.

Gender bias stops women from being in the labor force or advancing their careers. When people prefer one gender over another, women who are equally, if not more qualified than men, don’t have a fair chance.

When people make assumptions about how a person works based on their gender, it puts an invisible barrier up for any chances of promotions or advancement. If hiring managers believe that only men do the job the best, it diminishes any chance of having a diverse demographic of employees.

Sexual harassment describes any unwelcome sexual advances, verbal or physical behavior of a sexual nature, and asking for sexual favors.

And it's alarmingly common: In a 2018 survey done by the ABA Journal, 68% of female respondents said they'd experienced sexual harassment, and of those women's experiences, 70% were at work.

When the workplace is unsafe and uncomfortable for women, they can't thrive. Instead of aiming higher, sexual harassment makes women feel like their work or workplace threatens their safety. Often, it leads to women quitting and leaving the workforce. 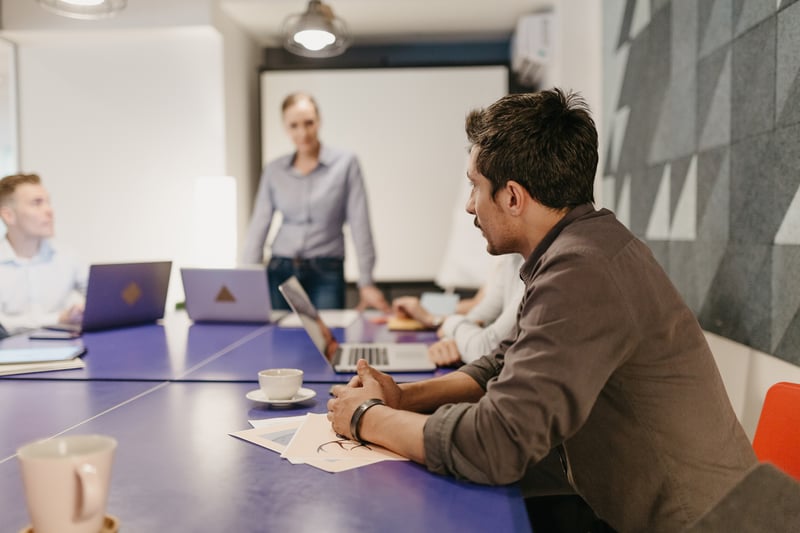 If a workplace can't recognize an issue that's happening right before them, they can’t make a change. Spotting discrimination and inequality is something anyone on a team can do — it’s not reserved for those in management roles.

The glass ceiling will persist if other employees and entrepreneurs can't use their voices and change their behavior. Discrimination against anyone in any form hinders progress for everyone.

Other forms of the glass ceiling

Apart from the reasons listed above, other forms of the glass ceiling can occur because of social issues. Glass ceiling jobs reach women from every background, but it's essential to understand that women of color, disabled women, and women from the LGBTQIA2S+ experience it more in different ways than cis-gendered white women.

How can you shatter the glass ceiling?

By you, we really do mean you.

These strategies aren't only for full-time employees with senior positions at your work. You have a voice at your own company, and it's essential to use it. By acknowledging the glass ceiling and trying to break it, you'll empower others to do the same. 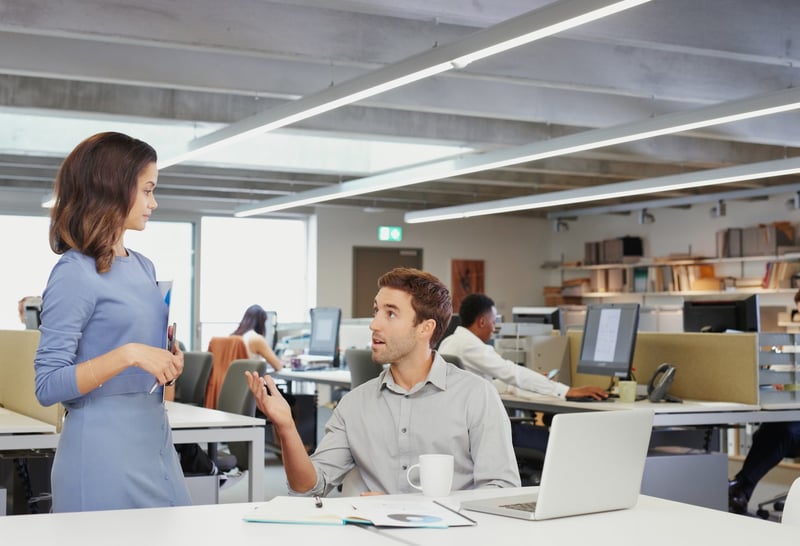 By breaking it, we mean overcoming those invisible barriers that stop you from advancing your career. You'll learn how those barriers affect you and tear them down. Plus, you'll pave the way for other women in the future to do the same. Your actions don't just make a difference for you, but all.

And don't let anyone convince you that breaking the glass ceiling is impossible, either. In 2021, 41 women were running businesses on the Fortune 500, which is a new record. And two Black women are running Fortune 500 businesses for the first time. You're capable of doing the same or breaking barriers in your workplace.

In the meantime, here are five strategies to put into practice:

1. Strengthen your network of coworkers

In particular, build strong relationships with people in leadership positions. You'll gain support that can introduce you to new opportunities. They can also give you critical pieces of advice if they know your aspirations.

Start by actively keeping in touch with your connections, even if they leave your place of work. Don't hesitate to connect via phone, email, social media, or however else you want to keep the conversations going.

2. Engage in bias and stereotype training

It's great to bring in an expert to get into the exact details of recognizing the glass ceiling and give their professional tips on how to break it in your workplace. From a manager's point of view, this helps to initiate conversations.

If you're unsure where to start or how to cover these issues, an expert can help identify your problems and work towards solving them.

When facing these invisible barriers, it's important to voice your experiences. Confronting problems that make you feel uncomfortable is scary, but other people may face these problems, too, and your bravery can benefit them.

If you notice a pay gap between yourself and your male counterparts, make sure you highlight your strengths well. Advocating for yourself means believing in your abilities and the career goals you've set out to reach.

Doing blind screening during the interviewing process helps to remove any unconscious bias that recruiters have. When you do blind screening, you exclude information like people's names and things that aren't related to the role. It's a great way to focus on the candidate themselves.

It allows everyone to be evaluated based on their skills and experience without having other factors influence a recruiter's decision.

Companies can begin to walk the walk by first assessing their work environment’s diversity. It'll show them where they lack diversity and what kind of goals they need to set for each department to ensure women reach those opportunities.

And women are ready. Trust us. One research project that aims to push for 100 female CEOs to lead Fortune 500 businesses by 2025 found that women are ready for CEO roles sooner, and it helps when companies identify their potential early on. Setting proper promotion and diversity goals will help bring women's skills to the top where they'll continue to grow, rather than limit their growth. 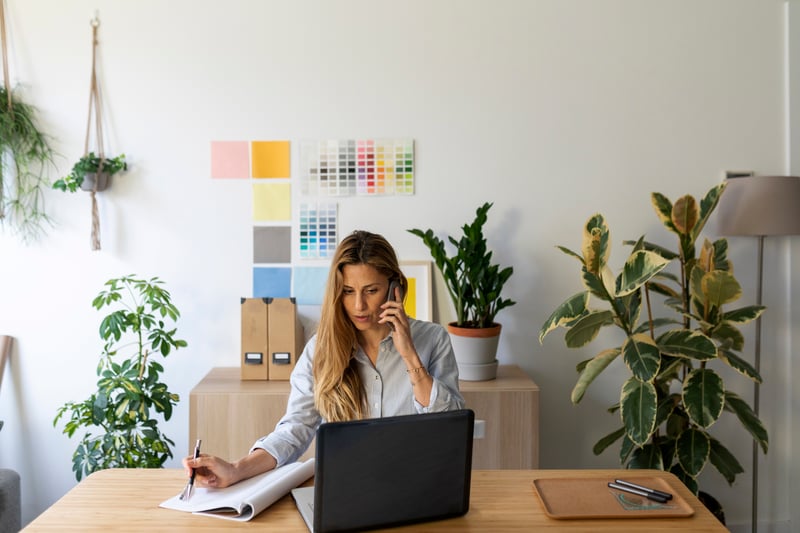 How has the glass ceiling changed over time?

It's been decades since the term glass ceiling was first introduced. But the fight for gender equality has been around for much longer.

Below are several related terms that refer to feminist movements and intersectional approaches to breaking the glass ceiling:

The women's liberation movement spearheaded conversations and campaigns against the pay gap between men and women. The term pink-collar refers to jobs typically held by women.

Often, these roles are in the caring professions. Compared to white- and blue-collared jobs traditionally held by men, pink-collar jobs pay less.

The maternal wall occurs when employers don't want to hire people with young children at home or who want to have more children. This typically puts women at a more significant disadvantage than men when trying to find work.

Author and leadership strategist Jane Hyun coined this term in 2005. She used it to describe the specific barriers that Asians and Asian Americans face when they try to chase after career advancements because of their ethnicity.

The glass escalator definition is from sociologist Christine L. Williams, who coined this phrase in 1992 to refer to men joining women-dominated fields and finding greater success than the other female leaders in their own companies. Men get on a fast-moving escalator while women must take the stairs. 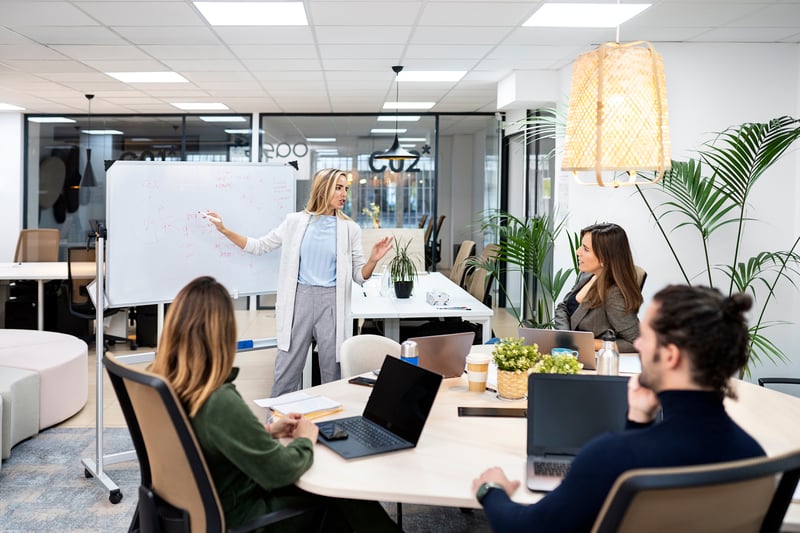 Upward, individually and together

A term coined in the 1970s still has relevance today. But, as you've seen, you can make a difference. Your actions can help with breaking the glass ceiling in the workplace, whether they're holding you or your colleagues back.

This isn’t necessarily an easy, or straightforward, task. Through a relationship with a BetterUp coach or mentor, you can gain tools, along with perspective, to help place cracks in the glass ceiling, and then eventually, break it entirely.

Adjusting your vision for 2022

If someone had a magical ball that could tell you what 2022 had in store for you, would you want to know? Instead, create your future with this process. Read More
Well-being
17 min read | October 14, 2021

Exposure therapy is a behavior treatment where you face your fears in a safe way with a clinician. Learn how it works and what conditions it is good for. Read More
BetterUp Product
12 min read | November 10, 2021

To perform at our peak, we need to thrive physically, emotionally, cognitively, and socially. We also need rest, healthy habits, a sense of belonging, and resilience. What if... Read More
Leadership & Management
11 min read | November 22, 2021

What we learned from leading a hybrid organization for 8 years

BetterUp's CEO shares insights into what makes a hybrid model work (or not) based on what he's seeing partnering with leading companies and drawing from the company's own... Read More
Research & Insights
8 min read | February 16, 2022

Young men lag behind all other groups with sensible goal-setting. We took a look at what’s behind this trend and what can be done to fix it. Read More
Well-being
12 min read | July 8, 2022