You are not alone in feeling lonely: What is this thing called loneliness?

The definition of loneliness

What is chronic loneliness?

Why do I feel so alone?

What does the research say?

What are the signs and symptoms of loneliness?

Nearly 40% of Americans are experiencing loneliness either all or part of the time — and it’s no longer an option to ignore it at home or at work.

Loneliness is making people sick, and it’s costing employers a ton of money. According to Gabriella Rosen Kellerman, psychiatrist, and chief innovation officer for BetterUp, “loneliness is an expensive problem that will affect their bottom line,” she said, “whether they realize it or not.”

In this complete overview of loneliness, we’ll cover its risks, causes, and when to see a specialist for help. We’ll also share some tips on overcoming loneliness (and some tips on preventing it from happening in the first place).

It’s more important than ever to eliminate the stigma and take a hard look at loneliness psychology.

Solving this public health issue is absolutely crucial for our mental fitness, overall health, and general wellbeing at home, in the workplace, and in the world at large.

The definition of loneliness

It’s important to realize that loneliness and social isolation are different — even though they influence one another often.

Feelings of loneliness are subjective and can only truly be defined by the person feeling them. These feelings often involve feeling misunderstood, left out, unheard, unwanted, unseen, unloved, not enough, or a mix of these.

Feeling this way can lead to social isolation which in turn leads to more loneliness (and the vicious cycle continues).

What is chronic loneliness?

If loneliness goes unchecked too long, it becomes ingrained in your daily experience and that’s when chronic loneliness sets in.

Chronic loneliness is the constant feeling of separation from other people, inability to connect with others in a meaningful way, and feelings of deep loneliness. 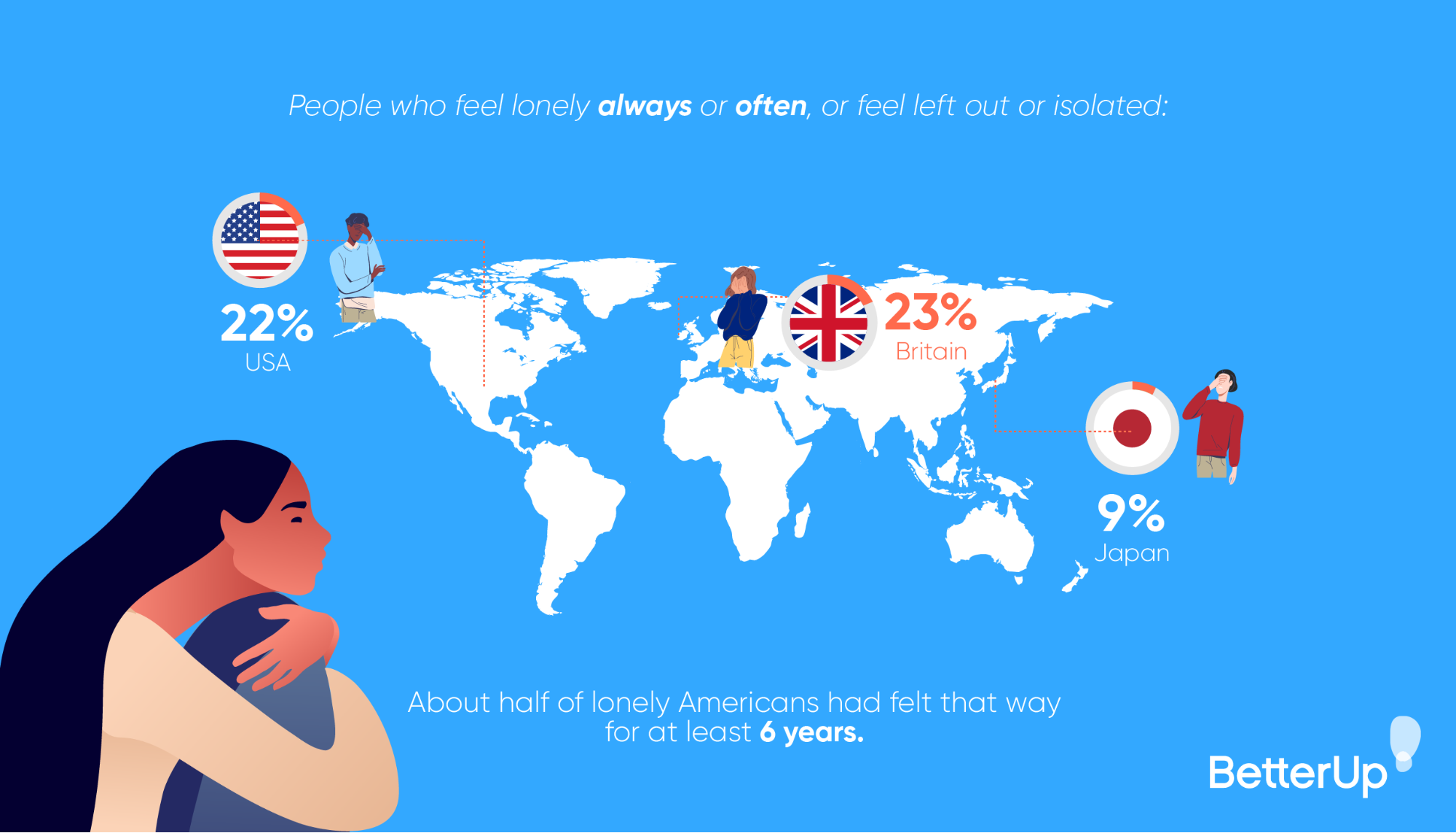 Why do I feel so alone?

Feeling alone can be caused by a number of things that impede being able to feel fully connected. Here are some of the top causes of loneliness: 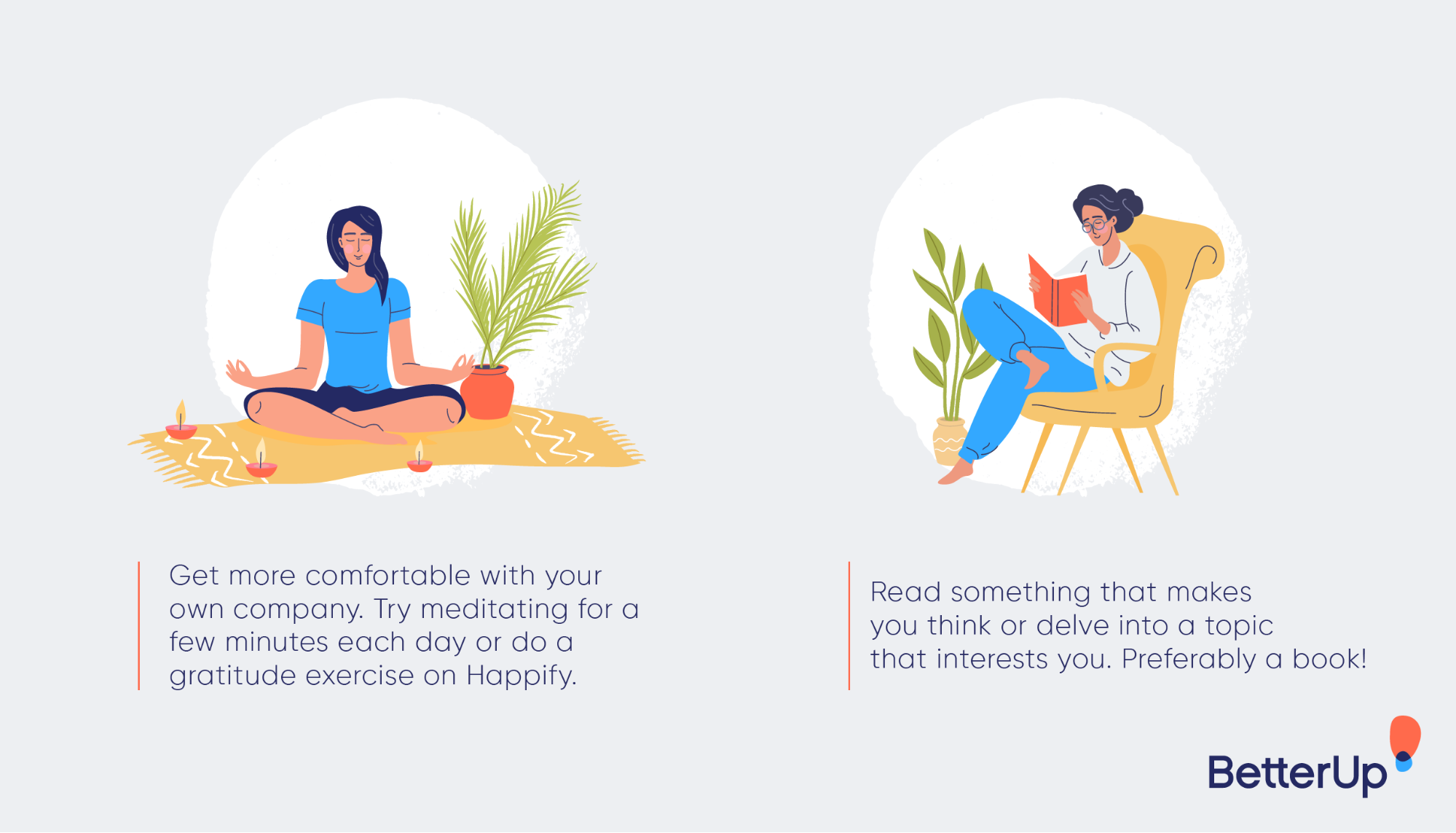 What does the research say?

The percentage of Americans experiencing loneliness is nearly 40%.

Unfortunately, that percentage has been steadily increasing with senior citizens and 18 to 25-year-olds being impacted the most (likely due to a major disruption in social support.) 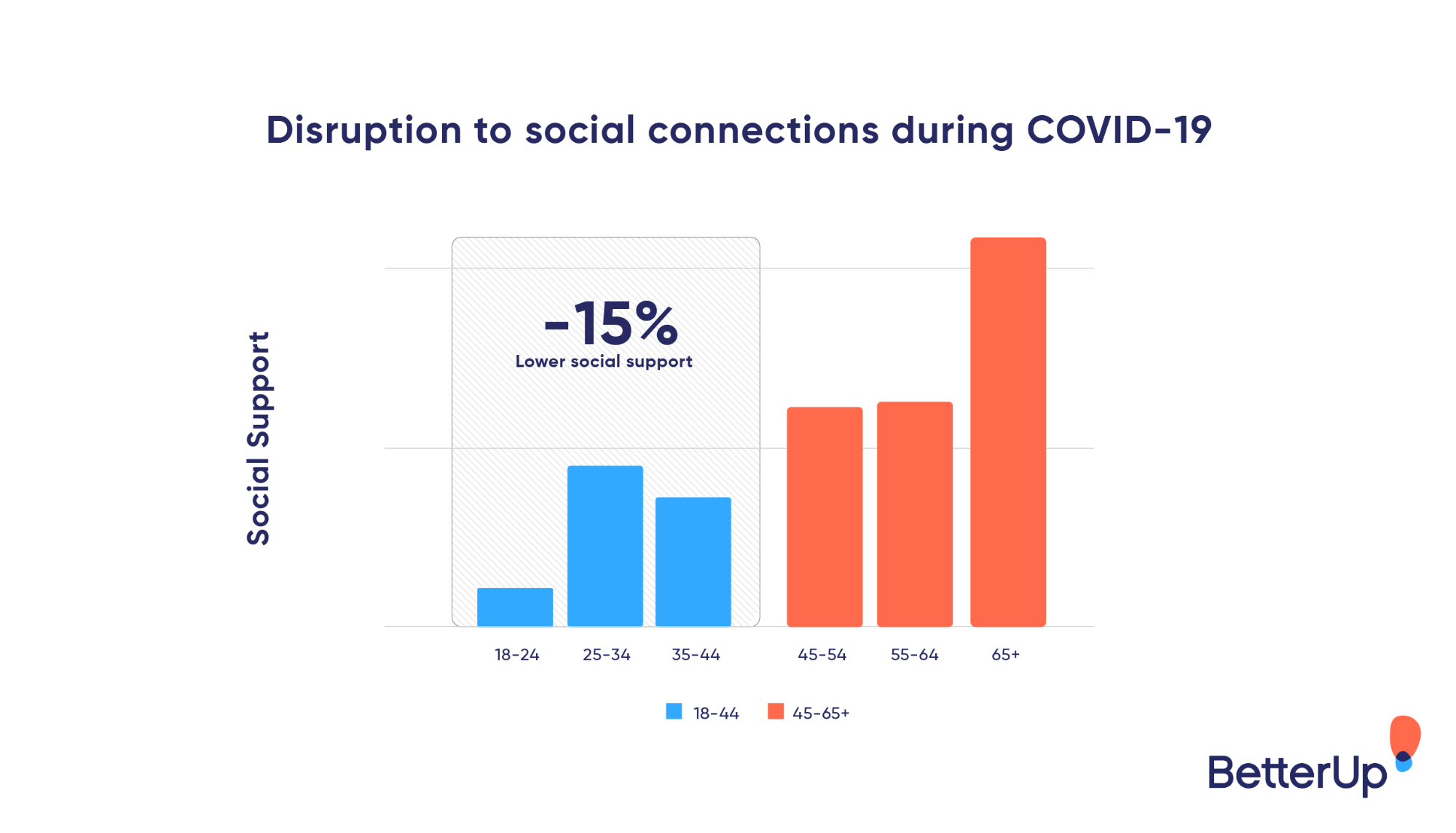 Workers are also a cause for concern.

America’s loneliest workers are single, childless, and well educated (with doctors and lawyers feeling the most lonely). They’re more likely to be government workers, non-heterosexual, and non-religious — and they’re at great risk.

Workers who reported having a strong social connection and a strong sense of shared meaning with work peers, increased their chances of getting a raise by 30%, and their likelihood of quitting fell by an additional 24%.

What are the signs and symptoms of loneliness?

Feeling deeply disconnected and alone is the number one sign of loneliness. Other signs of loneliness and symptoms include:

Several studies have shown that loneliness causes major health issues and stress responses in the body. Health risks include but are not limited to: 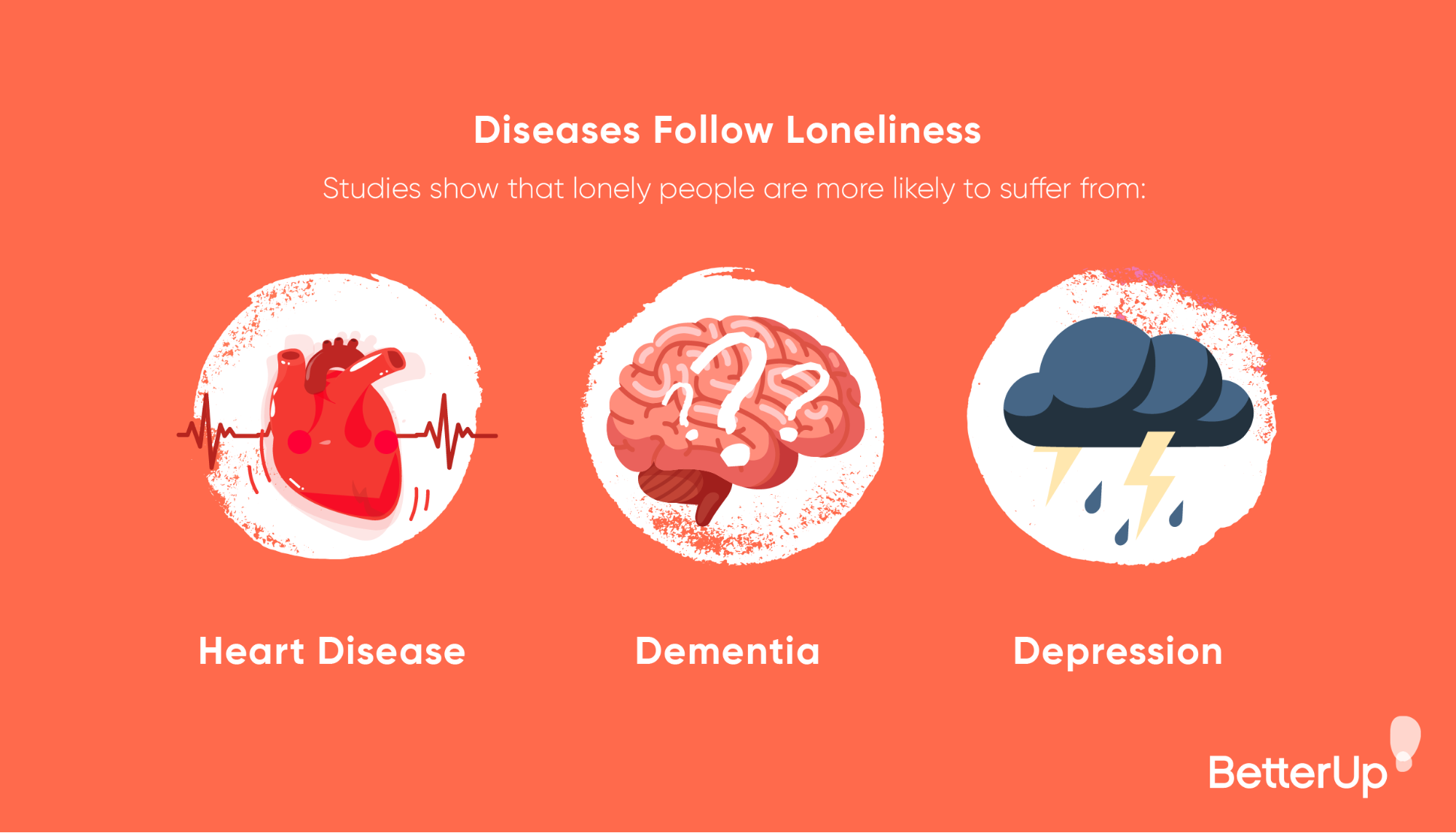 Now that we’ve covered the risks, let’s move on to our top tips for overcoming loneliness.

Our top tips for overcoming loneliness include:

1. Connect deeper to yourself: self-love, self-acceptance, and self-worthiness can help you feel confident about yourself (and therefore more open to connecting with others). Why? When you accept yourself and love yourself for who you are, you feel more comfortable in your own skin, making it easier to be more comfortable around others.

3. Prioritize social connection: social connection increases resiliency, wellbeing, mental health, and work performance. Make sure to schedule time to nurture your connections and create healthy boundaries to be fully present  (i.e. no phones at dinner or Zoom meetings). Check-in on your people — what have they been doing? What’s been on their mind lately?

4. Don’t expect or focus on rejection: people who struggle with loneliness may stop themselves from connecting with others out of fear of being rejected. While you can’t control other people’s behavior, what you can control is giving people the benefit of the doubt.

Don’t assume you’ll be turned down when striking up a conversation or trying to start a friendship — try anyway. And if it doesn’t work out, there are plenty of people in the world who would be delighted to connect with you. 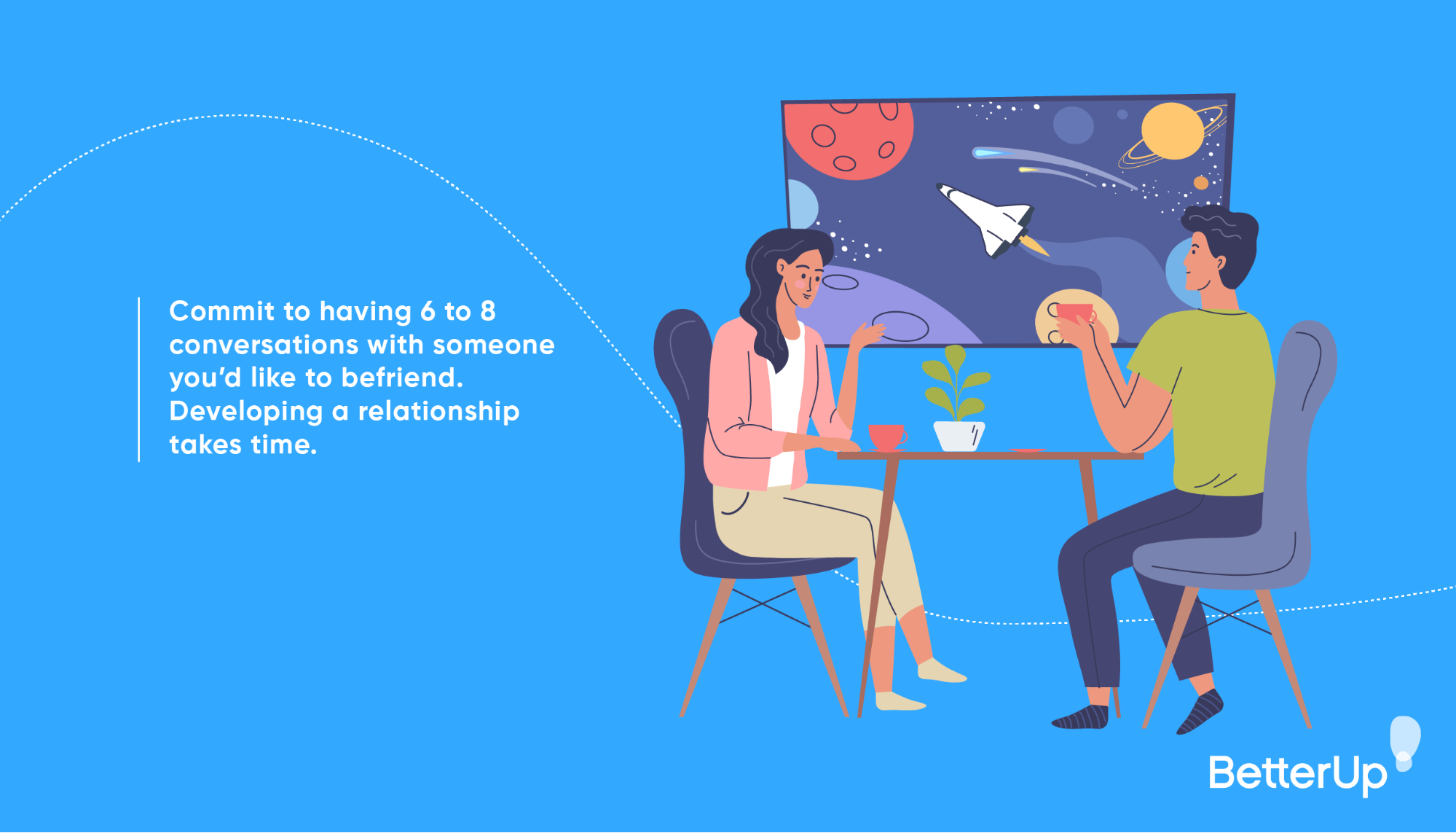 It’s about being a part of a give and take relationship where both friends understand each other, care about each other’s thoughts and feelings, and are there for each other through the good and the bad.

6. Nurture your emotional intelligence: hold space for your emotions, and ask yourself: Is there a message here? What’s the root of this? How can I learn from this?

But, what if you want to stop loneliness from ever creeping in?

That’s where prevention comes in.

Our top three tips for preventing loneliness are:

1. Stay engaged with your community and your family: go on family walks around your neighborhood, volunteer, participate in events, schedule a night out with friends, and go on a date night as often as you need it.

If in-person gathering isn’t an option (due to COVID-19 or another reason), get creative and stay in touch online. Watch movies together online or schedule a social distancing gathering or drive-by party if appropriate.

Make sure to weave nurturing your social connections into your healthy diet and exercise plan (i.e. stay hydrated, eat a vegetable with every meal, do yoga, go to brunch with Lisa, plan a date with Tom).

If you’re a solopreneur, look for in-person and virtual coworking spaces to regularly connect with others just like you. 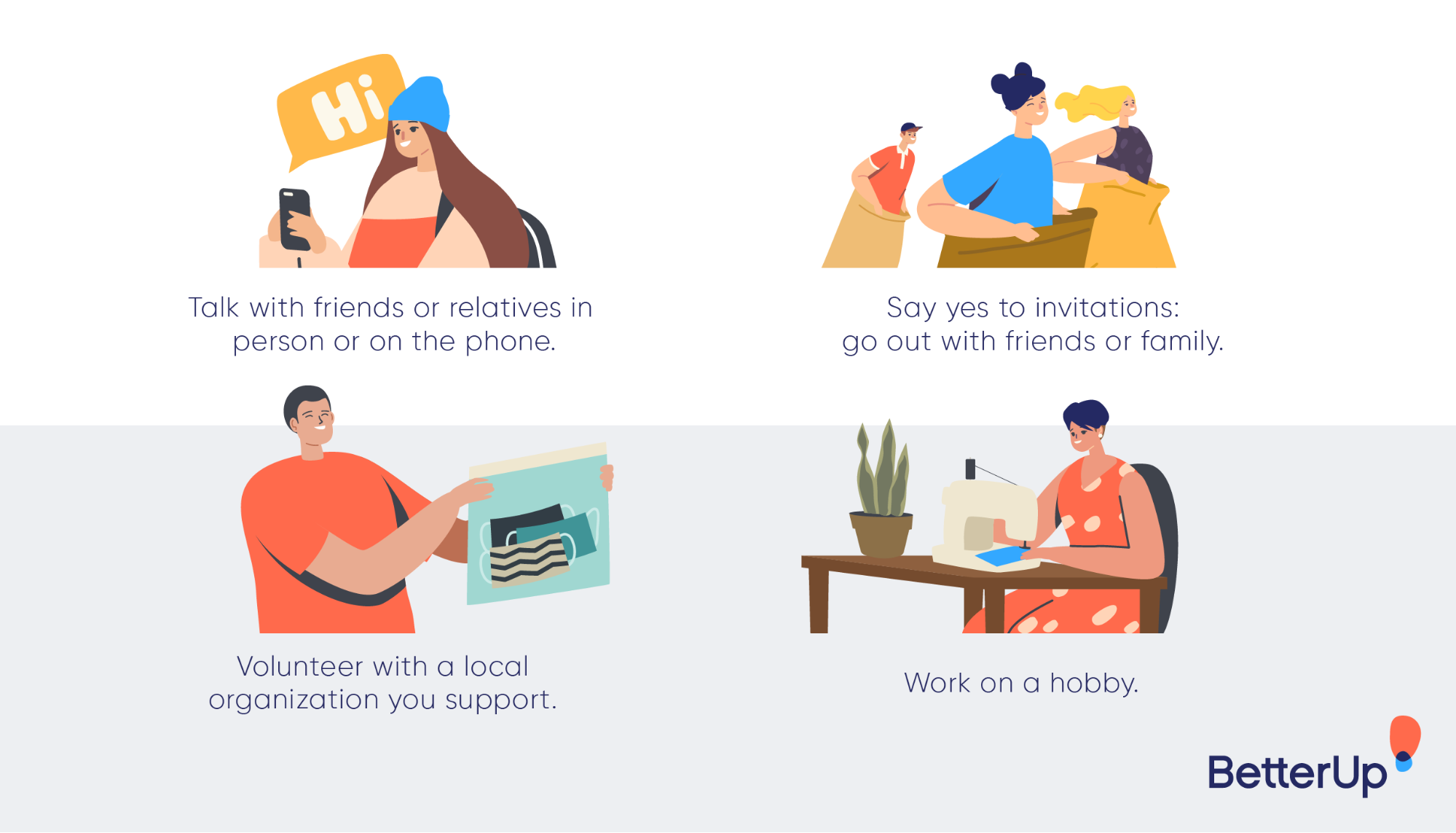 Which age group is most vulnerable?

Although loneliness can affect anyone, senior citizens and young adults are the two groups most vulnerable.

Here’s a look at the two groups and why they’re vulnerable:

Since these groups constantly experience major changes and losses in their lives, it’s no wonder they’re the most vulnerable to experiencing loneliness.

Unlike loneliness, solitude is a positive and healthy way to spend time alone.

Solitude generally involves a desire to be alone to regroup, refocus, or relax, while loneliness involves feeling disconnected from others when you don’t want to be.

Can you die from loneliness?

The effects of loneliness over time is a cause for concern

Social isolation and loneliness are both risk factors for premature mortality. According to loneliness and social isolation expert, Dr. Julianne Holt-Lunstad, lacking social connections has a mortality impact equivalent to smoking up to 15 cigarettes a day.

Dr. Holt-Lunstad also concluded that while you may not die from loneliness immediately, loneliness has a greater impact on our health than obesity, physical inactivity, and air pollution.

Because people influence one another, loneliness can be contagious — especially when a ‘non-lonely’ person spends time with a lonely person. Researchers have also found 15 gene regions linked to loneliness meaning that loneliness can also be hereditary.

When should you see a specialist?

If you’re having a hard time managing your loneliness, or if you’ve reached a state of chronic loneliness, it’s time to seek help and support.

Some red flags that point to needing a specialist are: experiencing suicidal thoughts, feeling anxious or depressed, having difficulty sleeping, experiencing physical pain, or feeling a lack of wellbeing due to loneliness or chronic loneliness.

It’s time to beat the stigma around mental health and loneliness. There’s nothing wrong with getting help — your life might depend on it.

Loneliness is an epidemic and a major public health concern that must be addressed immediately (or the numbers will continue to rise).

By understanding the causes, the signs, the symptoms, and some tips on how to approach loneliness, you can overcome a current state of loneliness and prevent loneliness from coming back in the future.

Ready to learn more? Use our resource kit ‘Overcoming Loneliness in a Time of Social Distancing’ — hand-selected by researchers to help you get as much value as possible!

6 ways to connect and help yourself feel less lonely

How can loneliness still be an issue in the age of technology? Despite being at the point in history when most people can connect with others remotely,... Read More
Well-being
7 min read | December 23, 2020

Heading into the holidays, "Are you OK?"

Looking inward can make you a better leader

Jump to section Bringing Inner Work out of the shadows Getting started on Inner Work If I asked you to make a list of all the things you need to do for... Read More
Well-being
15 min read | July 9, 2021

Always working long hours is not the answer - here's why