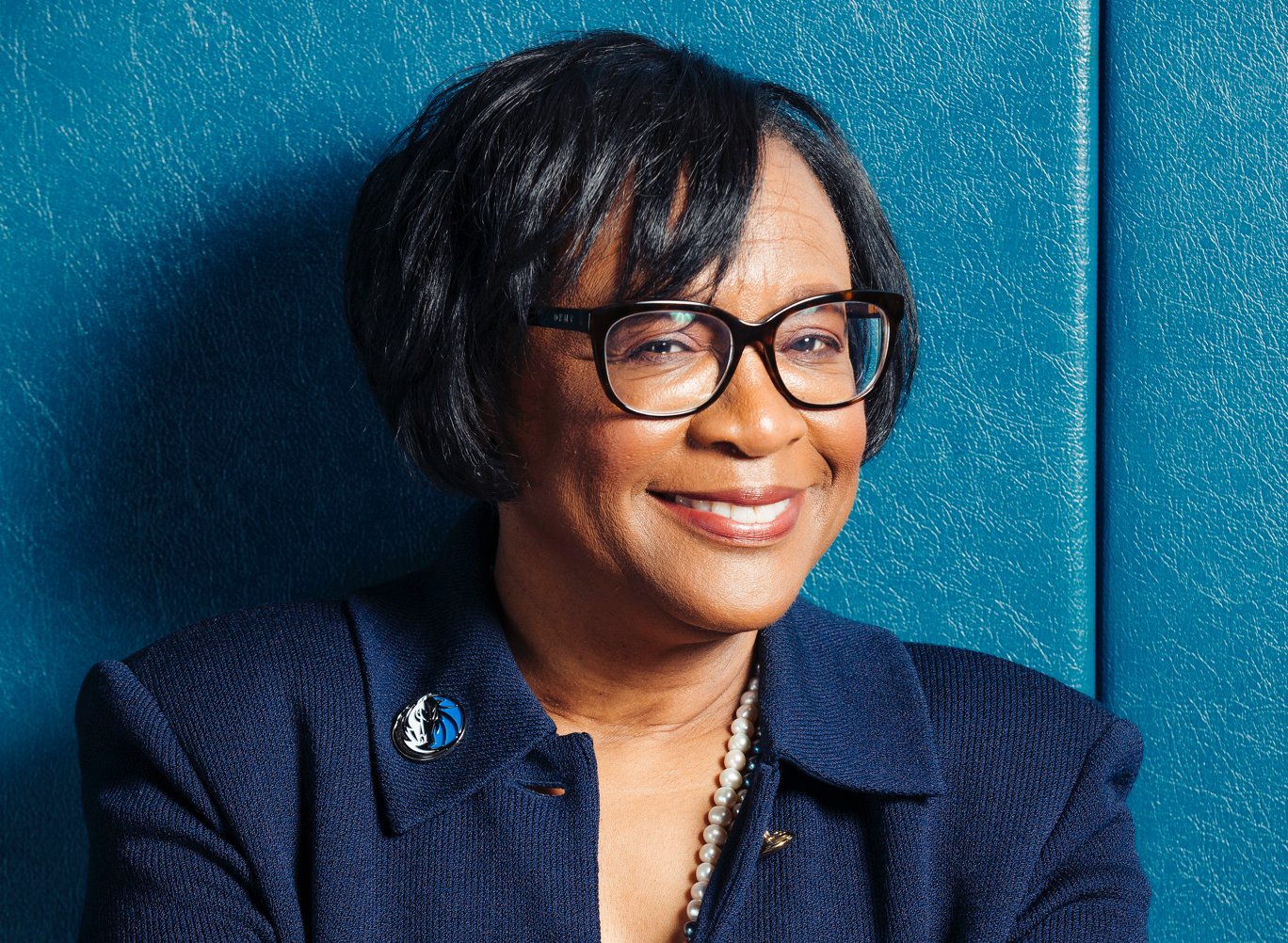 Dallas Mavericks CEO Cynt Marshall is a big believer in people-first leadership, but as she explained to me recently, before she could help her team bring all of themselves to work, she first needed to learn to bring her own unique experience, values, and personality into her work as well.

The world of business she came up in didn’t make it easy for her. As Cynt shared in a long and inspiring interview, she comes from an unlikely background for an executive, having grown up in a chaotic San Francisco Bay Area housing project.

Cynt’s parents were big believers in education and she was fortunate enough to get a full ride scholarship to the university of her choice. But when she started her career after she graduated, she was still a Black girl from the projects with long braids and loud shoes. Her first manager didn’t like it, telling her to change her look.

As a 21-year-old unaware of what was appropriate and what was not in the business world, Cynt complied, staying up all night to take out her braids and borrow more “corporate” shoes. At that stage she didn’t understand how to value herself and bring her whole self to work.

But she would learn.

Around 20 years and many rungs up the career ladder later, Cynt was offered the chance to be an officer of the company where she was working. As one of one a handful of Black women in the top echelons of leadership, it was both a big step up and a big deal. But when her manager started giving her a laundry list of things to change – her laugh, her demeanor, even her name, she needed to be “Cynthia” not “Cynt” – she politely declined.

“I am so honored but I can't accept this position. You’ve got to help me figure out how to go back to the chairman because I don't want to appear ungrateful but I can't fundamentally change who I am,” she told her boss.

Just five minutes later the phone rang. It was the chairman. He was calling to tell Cynt she didn’t need to change a thing. In the end Cynt got her promotion and also learned a powerful lesson that was foundational for the rest of her career.

She had learned not only to value her whole, authentic herself, but that the job of a true leader is to help others bring all of themselves – all their quirks, behaviors, background – to bear on the work they do.

It took Cynt nearly 20 years to learn this lesson but, thankfully, most companies have evolved since then. They’ve awakened to the fact that organizations can’t afford to miss out on their people’s full talents for decades and have begun encouraging people to bring their whole selves to work from day one.

Bringing this lesson to the Mavs

That’s how the best work gets done, but that’s not what was happening when Cynt first arrived at the Mavericks after a long, successful stint as a Chief Diversity Officer at AT&T. Looking to transform the culture to match her personal values of character, respect, authenticity, fairness, teamwork, and safety, both physical and emotional – handily they spell out #CRAFTS – Cynt committed to meeting with every member of the organization in her first 90 days.

She asked every employee the same two questions. The first was, “Tell me your life story.”

“Usually they’d come back and say, ‘This is my fifth season at the Mavs.’ I'd have to stop and say, ‘You weren't born in this building, right?’” she recalls. The message Cynt wanted to send was that all of you matters. Bring your history, your values, and your personality into work with you. Don’t put on your corporate mask. Don’t pretend to be a superhero. Making space for the whole, real person makes the organization stronger.

The second question was more typical job interview fare: “Tell me where you see yourself in five years.” The question might be standard, but Cynt wasn’t listening to see if each employee fit in with the Mavs vision. Instead, her goal was to shift the Mavs to help her people have the careers they envisioned.

The interviews helped convey the message that at the Mavs everyone matters and everyone belongs. But they were only one step in a longer process of transformation which also involved employer resource groups, culture surveys, and Cynt acting as an ambassador for her values every day.

The whole exercise had a profound effect not just in the team, but on Cynt. “I just fell in love with the people,” she reports. And that, for her, is the first and most important duty of a leader.

That’s a simple leadership philosophy, but also a profound one. Cynt strips the concept of being a people first business leader of jargon and complexity and boils it down to its most important essence – your employees are people first and employees second.

Putting her values into practice

How does Cynt translate this principle into day-to-day decisions? She shared one trick that I think I might steal and it involves, improbably, crystal balls and rubber balls.

When it comes to prioritizing her life, both at home and at work, Cynt divides her responsibilities into crystal and rubber balls. Crystal balls, if you drop them, shatter and you can never get them back. Rubber balls, on the other hand, bounce. You can drop them and catch them again if circumstances are right.

Cynt works hard not to drop any crystal balls. That means, when she was an executive at AT&T and was asked to do some important lobbying on the same day as her son’s first high school swim meet, for example, she said no despite push back from fellow executives. That swim meet was crystal – it was never coming back again. (Her son won his race and appreciated his mama’s attendance, she adds proudly.)

But the opposite is also true. The crystal vs. rubber distinction helps her insist on what’s truly important, but it also reminds her to let go of the less essential. “That’s rubber. It’ll bounce back,” she frequently tells her staff when they’re trying to crowd too much into the calendar.

The key to people-first leadership, Cynt has learned over the course of her trailblazing career is to know your own values. Know what’s crystal and know what’s rubber and, as another Mavs’ hashtag instructs, #DoYou at work. Once you’ve got that down you can move on to leadership.

At BetterUp our mission is to help people live their life with greater clarity, purpose, and passion. Cynt is a perfect example of what that looks like in practice. She is a leader who inspires her people to not just be their full, authentic selves at work, but to be the best possible version of themselves they can be. I hope to meet more and more leaders like Cynt.

As employee burnout continues to rise in the workplace, many HR leaders are asking themselves: how do we stop it? Read More
Leadership & Management
13 min read | January 13, 2021

Discover the secret behind influencing people. Learn how to exert influence to enable others to share your vision and collaboratively achieve your goals. Read More
Culture
4 min read | September 2, 2019

Reflections on shift: cracking the code to people transformation in the workplace, and beyond

Recently we had the good fortune to bring together world-renowned psychologists, academics, thought leaders, and HR practitioners from some of the largest global... Read More
Well-being
7 min read | February 1, 2021

Karen is a senior leader at a fast-growing technology company. With the help of her BetterUp Coach, she is unlearning emotional suppression and discovering how letting her... Read More
Leadership & Management
11 min read | May 18, 2021

As the world re-emerges, frontline managers have the greatest influence on how the workforce makes the transition. Our coaches weigh in on the challenges. Read More
Leadership & Management
14 min read | October 20, 2021

People analytics: Will algorithms replace the critical thinking of HR?

​​People analytics is more than just a clever new name for HR metrics. Learn what people analytics is and how it impacts business processes and well-being. Read More
Leadership & Management
11 min read | November 22, 2021

What we learned from leading a hybrid organization for 8 years

BetterUp's CEO shares insights into what makes a hybrid model work (or not) based on what he's seeing partnering with leading companies and drawing from the company's own... Read More
Professional Development
7 min read | November 10, 2022

People are at the center of every organizational transformation. Learn how European leaders are rethinking their people engagement initiatives to embrace the future. Read More
Leadership & Management
15 min read | January 2, 2023