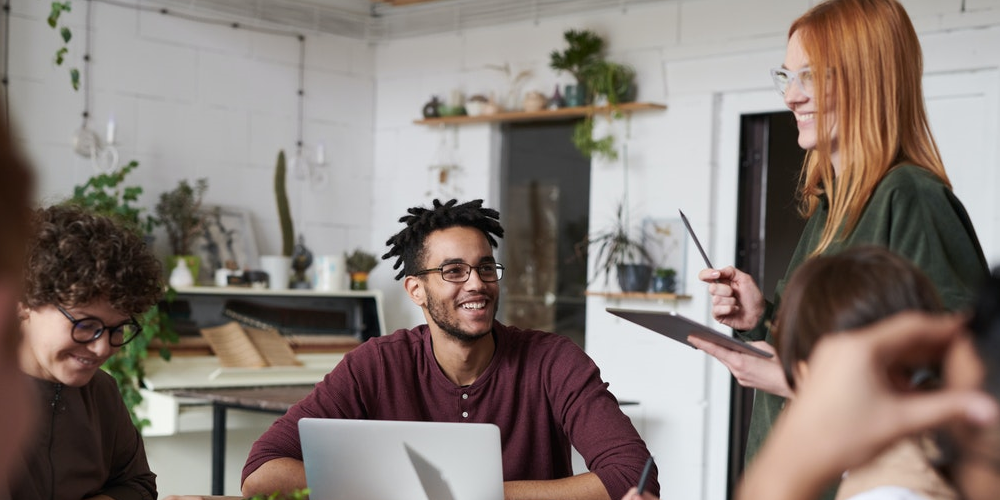 What is 360-degree feedback?

Pros and cons of 360-degree feedback

How to use 360-degree feedback

What is the purpose of 360-degree feedback?

Who is involved in 360-degree feedback?

​​Feedback is a key element to keeping your employees engaged and motivated at work. And 360-degree feedback, or multi-rater feedback, is growing in popularity. This type of feedback gives a view of employee performance from different people. So peers, managers, and direct reports provide anonymous employee feedback.

When done right, 360-feedback has a host of benefits. These include strengthening accountability and collaboration among teams and reducing biases. But this kind of feedback isn't without its flaws.

We'll unpack those later, but first, let's look at what 360-degree feedback is and how it can benefit your business.

What is 360-degree feedback?

It's still standard for employees to only receive structured, formal feedback from their manager. And this is usually during an annual performance review. In fact, for many companies, feedback is synonymous with the yearly performance evaluation.

In addition to this feedback cycle, 360-degree feedback provides extra insight. As we noted earlier, multi-rater feedback facilitates anonymous input from various sources related to an employee. It usually involves eight to 10 people, all chosen because they work closely with a given employee.

They receive a curated survey or questions about employees' work ethic, work style, competencies, and areas of improvement. These questions also leave space for written answers. This space allows all reviewers to give extra context and specific examples to support their feedback.

Getting more frequent and constructive feedback from different viewpoints can help your employees grow. It's also been shown to improve the employee experience as workers feel more appreciated.

Questions and written answers can run the gamut given the breadth of insight 360-degree feedback offers. Here are some examples of the kind of feedback raters can give:

As you can see, responses can be candid or vague. So, once this information is collected, it's essential to review and organize it strategically.

Pros and cons of 360-degree feedback

One significant benefit of 360-degree feedback is how it can combat managerial or team bias. According to Deloitte's 2019 State of Inclusion Survey, bias continues to be a big issue for many companies:

Experiencing or witnessing bias can create a hostile work environment. And unfortunately, over 60% of employees feel bias is still present in their workplace. There's room for improvement here.

Some cons of 360-degree feedback include:

Balancing the pros and cons can help you decide if 360-degree feedback is a good fit for your organization.

How to use 360-degree feedback

This information is then often used in one of two ways:

1. As an employee development tool

Such insight is helpful for managers to see where employees excel and to see their areas of improvement. This can clarify if there's a better opportunity or skillset needed for that particular employee to thrive. In short: which skills can they develop, and what do they already do well?

A 360-degree feedback system can also be used as part of a more extensive performance management system. It is not advised, though, as this can erode trust between employees over time.

Also, 360-degree feedback focuses on competencies rather than the ability to fill their role's requirements. So it may not offer the best data to make an informed decision.

Regardless of how managers use the information, most 360-degree feedback initiatives follow the same basic steps.

Ideally, this process is a comfortable one for all parties. Hopefully, the employee feels acknowledged, recognized, and less intimidated by the constructive criticism provided.

What is the purpose of 360-degree feedback?

This type of feedback has benefited teams for some time. But its value has grown thanks to this new normal.

Now that remote work is the norm, leaders may not have a clear picture of where their employees are thriving and where they can improve. That makes 360-degree feedback a considerable asset for any organization from today forward.

Plus, 360-degree feedback has a range of social and psychological benefits:

But 360-degree feedback does not only help employees. It can also help leaders make better career development plans. The insight into team dynamics helps managers develop more effective training plans. This leveling up of current employees addresses skill gaps and can boost retention. 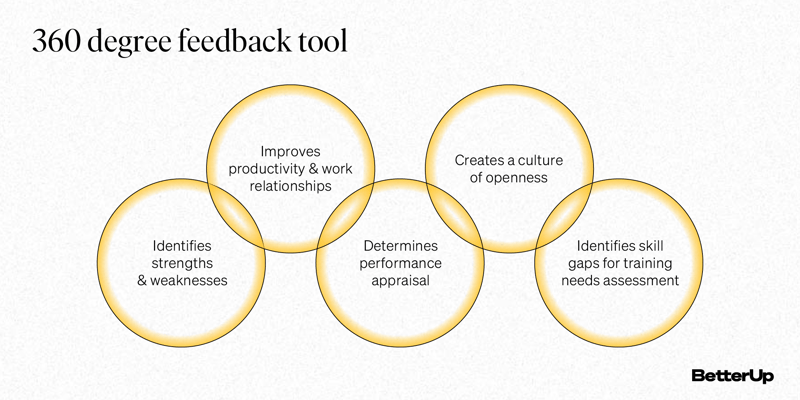 Ready to take your leaders to the next level? Try a demo of BetterUp.

Who is involved in 360-degree feedback?

For 360-degree feedback to be most effective, it has to come from various sources.

Asking people from all levels and teams to contribute feedback for an employee is the best way to go. It offers a well-rounded view of what it is like to work with that person. Plus, it can ensure that employees get the recognition they deserve for work that might otherwise go unrecognized.

A 360-degree feedback program can involve the following people:

Typically, eight to 10 people make up a 360-degree review. More raters can help maintain anonymity and provide a more nuanced view of an employee.

After a project, it may be more beneficial to get 360-degree feedback from a business partner or customer. However, during a review period, input from a direct report or colleague may be more valuable. There is usually a self-reviewing component for the employee in both cases.

Each rater receives an anonymous feedback form with different questions. These questionnaires detail what an employee did well and where they could improve.

Using customized employee surveys gives a well-rounded view of each employee. They also better reflect the relationship between the reviewer and the reviewer.

Leadership can use an effective 360-degree feedback tool here. It can facilitate getting formal, anonymous feedback from direct reports, managers, and peers.

However, 360-degree feedback goes well beyond using the right software and processes. Integrating multi-source feedback programs calls for a culture shift, too.

Creating a culture where employees get honest feedback can reduce bias, boost employee confidence, and increase transparency. Constructive feedback, given at the right moment, benefits employee development and career advancement. Positive feedback is also proven to have positive business outcomes.

A 360-degree feedback process also makes it easier for team members to acknowledge one another. It creates space for additional acknowledgment, leading to more engaged, empowered employees.

While 360-degree appraisal has its value, it’s often not as effective or appreciated as 360-degree feedback.

360-degree feedback can be given or received at any time and often is less biased since it involves an employee’s work on a specific project.

A 360-degree performance review, however, is more formalized. It's usually during a review period when employee pay and compensation are part of the conversation.

Collecting 360-degree feedback throughout the year can help prepare for performance reviews. When an employee receives feedback year-round, they can incorporate it more quickly.

With ongoing 360-degree feedback, employees can reflect on their year during performance review time. Plus, managers have a resource to recall what employees worked on throughout the year and see how they progressed.

Yearly reviews are a vital time to set new goals and recognize employees for their growth. 82% of employees see recognition as an important part of happiness at work. 360-degree feedback offers more frequent recognition, so employees are inspired to do their best. However, 360-degree appraisals don’t often have the same effect.

360-degree feedback can be a helpful tool to foster teamwork and offer employee recognition. This multi-source feedback program can help your company create more relevant and personal and professional development plans for team members.

If peer-to-peer feedback isn't common in your company, 360-degree feedback is a helpful tool. Use it strategically to shift how your employees relate to and connect with one another.

Dealing with difficult employees is always a challenge. Learn the causes of bad employee behavior and how to move forward in your workplace. Read More
Professional Development
18 min read | August 19, 2021

BetterUp's People Analytics Dashboard goes beyond usage and satisfaction metrics to help you to track the actual growth of your people in critical mindsets, behaviors, and... Read More
Leadership & Management
14 min read | July 26, 2022

There’s a heated debate about feedback sandwiches: do they actually work? Find out how you can give effective feedback today. Read More