Why we're facing a crisis of imagination, and how to overcome it 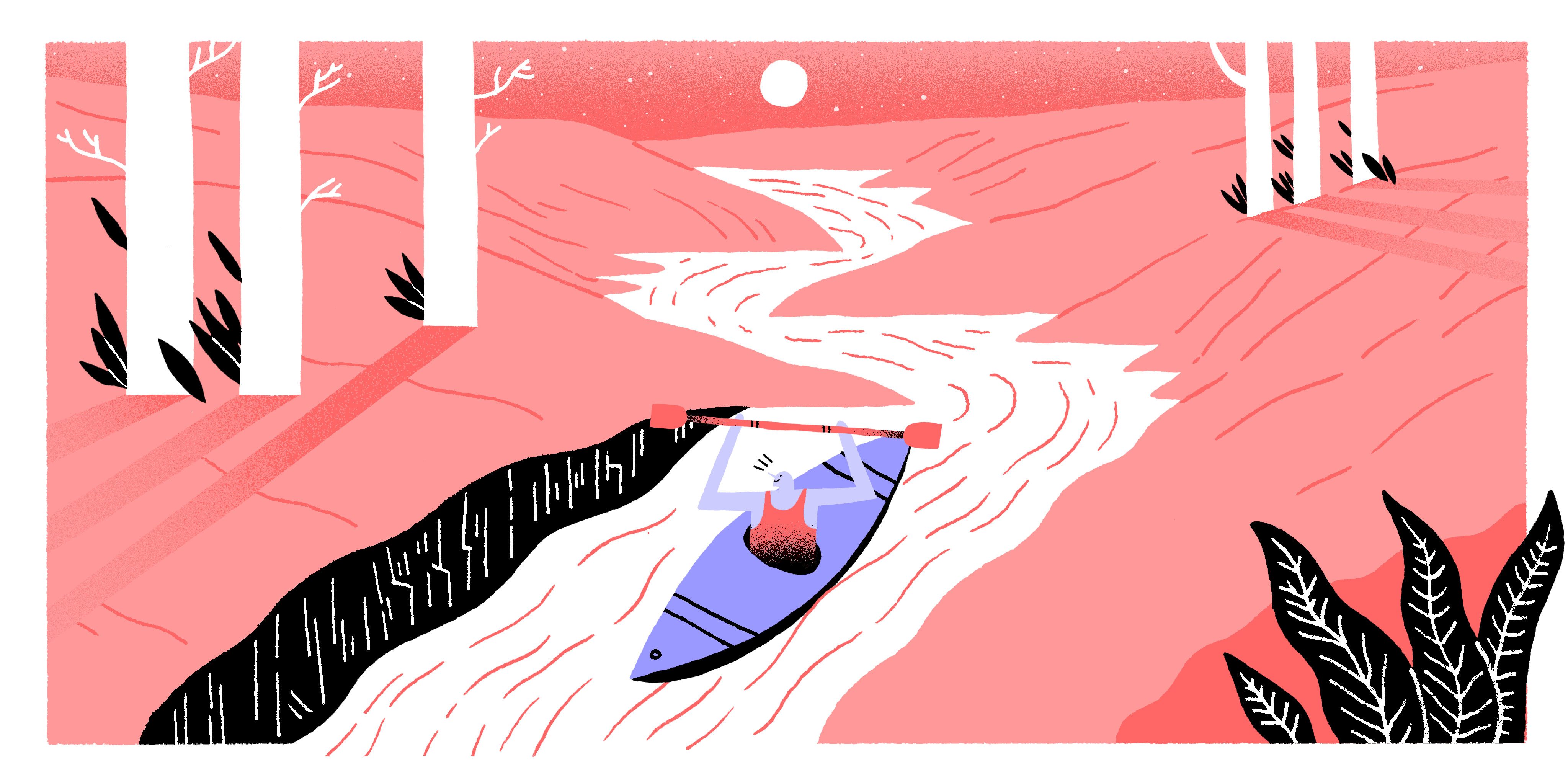 On learning to see the world in new ways

On moving from clocks to clouds

From making sense to breaking sense: how to leverage abductive reasoning

On entering a constant state of becoming

John Seely Brown, or “JSB,” as we affectionately call him around the office, is a BetterUp Science Board member and organizational learning researcher. He is the Independent Co-Chairman of the Deloitte’s Center for the Edge, a visiting scholar and advisor to the Provost at University of Southern California (USC), Amazon board member, and author of numerous publications on business strategy and management issues.

JSB recently stopped by our office to talk about what it means to live in a “white water world.” Here are some highlights from his talk.

My father told me to approach my career path as if it were a steamboat. He told me to choose a career (set my course), start the engine, and power forward. If I had grit, he said, I wouldn’t need anything else. It didn’t quite work that way in the post-industrial age. I spent most of my career navigating a sailboat, tacking the wind to maneuver, and getting back on course, as needed.

But today, we live in an age of white water kayaking. We are immersed in so many flows of information, it’s easy to get confused, overwhelmed, and lost at sea.

Successful leaders must learn how to participate in these flows by reading the currents. They must focus on and read context, not just content. And they must learn to break habitual patterns of thinking to make sense of the world in new ways. Only then can they begin to construct narratives to communicate their vision, mission, values, and strategy to their organizations and teams.

On learning to see the world in new ways

The most common thing I ask CEOs is, “How often do you get out of your comfort zone and expose yourself to something brand new?”

I once met a hedge fund trader in Aspen who spends three days in at a conference there every year, immersing himself in something new. He has a simple formula. On the first day of the conference, he goes to every talk and listens closely. On the second day, he sits outside the coffee bar and listens to conversations. He tries to pick up the genre of practice in the discussion and understand how people talk to each other. On the third and final day, when he feels he knows enough about a given topic, he enters the conversation.  Curiously, after that workshop he went back to New York City and became the major force behind Bloomberg’s Hybrid Taxi initiative and Obama’s Cash for Clunkers…not bad, I thought!

It’s an interesting heuristic for survival in a world of constant change. Our goal today is to move from mechanistic thinking and to instead understanding the context you’re in and working within the currents.

On moving from clocks to clouds

As a culture, we treat every problem as a clock: we take it apart and put it together again.

The great philosopher Karl Popper said that we think of all problems as either clocks or clouds. But as a culture, we treat every problem as a clock: we take it apart and put it together again.

There are no pieces to take apart in a cloud–it’s a dynamic entity that is constantly changing. The kind of reductionist thinking we’re accustomed to simply doesn’t apply, and might actually be counterproductive.

Today, we have to move from the world of clouds to thinking about clouds. We live in a world that requires what Josh Cooper Ramo refers to as a 7th sense: it’s the ability to look at any object and see how it might change by connections. To create change, we need to be able to see in new ways where the connections are not obvious and sense can be quite elusive.

From making sense to breaking sense: how to leverage abductive reasoning

Sherlock Holmes is a master at using his imagination to make sense. It’s what makes him such an incredible detective. He is able to see things other people couldn’t, with very little time and data.

Today, many CEOs spend too much time trying to collect the last 10-20% of information in order to make an informed decision. The most successful leaders have the confidence to take a bet instead and make mistakes in a rapidly changing world filled with contradictory facts.

Our ability to break sense is becoming increasingly important in this white water world.

That’s because they’re masters of abductive reasoning: a way of making sense of stories that don’t make sense by first breaking sense. They tap into the pragmatic imagination (not practical!), which can play over the entire reasoning spectrum. Often, this involves expanding the realm of possibilities before contracting it and stepping away from all-too-familiar simple logic that tends to rule academic and business worlds.

Our ability to break sense is becoming increasingly important in this white water world. This world demands the kind of coaching that can help individuals develop an ability to break and make sense and construct narratives to communicate these strategies to their teams.

On entering a constant state of becoming

Almost everything we hear is deductive. We call it logic. But when we look at radical thinkers — individuals like Jeff Bezos, for example — their decisions rarely make logical sense, yet their organizations thrive. Where’s the disconnect?

The issue I see in today’s world is that we face a crisis of imagination. Most of us are so attached to what we think is logic, we don’t realize that we have no understanding of how much the game has changed. Increasingly, we must be adept enough to construct stories and fill in the gaps that will ultimately prove to be more valuable than the facts in front of us.

One thing that’s critical to helping close these gaps is to create epiphanies. How do you say something at the right moment to create an epiphany? This is something coaching can help with, too: a coach spends most of their time listening carefully, determining what the blockage is, and saying one simple thing to facilitate an epiphany for the coachee.

Another critical skill is play. Culture evolves from play (Huizinga, 1938), and if you’re not willing to play with the system, I assure you that you will get stuck. Only by playing with something can you understand the pushback. If you want to solve hard problems and become an agile player (and an agile organization), you must enter a constant state of becoming by learning to work fluidly with your teammates to evolve a common language and practice that will allow you to approach problems from a place of curiosity. By nature, this practice will lead to a willingness to work on the edge.

In today’s world, people — not processes — get work done, and only when you become a full-blooded member of the community of practice can you truly push yourself to the edge of innovation and transformation.

The path to individual transformation in the workplace: part three

According to John Dewey, “We do not learn from experience, we learn from reflecting on experience.” Self-reflection is a part of Being, the third stage of individual growth... Read More
Culture
4 min read | September 2, 2019

Today marks another milestone in our company journey to help workers at all levels flourish in the workplace via the use of coaching, technology and evidence-based research.... Read More
Diversity & Inclusion
14 min read | September 2, 2019

What we deem to be “the future” of work is constantly shifting, for obvious reasons. But if the last few years are any indication, work is becoming more than a job for many... Read More
Leadership & Management
12 min read | July 20, 2020

The power of positive psychology and coaching: developing resilient leadership

Resilience at Mars: growth and transformation in extraordinary times

In the spring and summer of 2020, BetterUp partnered with Josh Bersin Academy for an exclusive three-part webinar series designed to help professionals adapt and thrive in... Read More
Leadership & Management
4 min read | September 2, 2019

Our co-founder and CEO, Alexi Robichaux, recently joined the Deloitte Center for the Edge’s Duleesha Kulasooriya and Maggie Wooll in a conversation about their paper:... Read More
Leadership & Management
3 min read | September 2, 2019

Developing agility and resilience in the core of your organization

Why your company needs a strong feedback culture