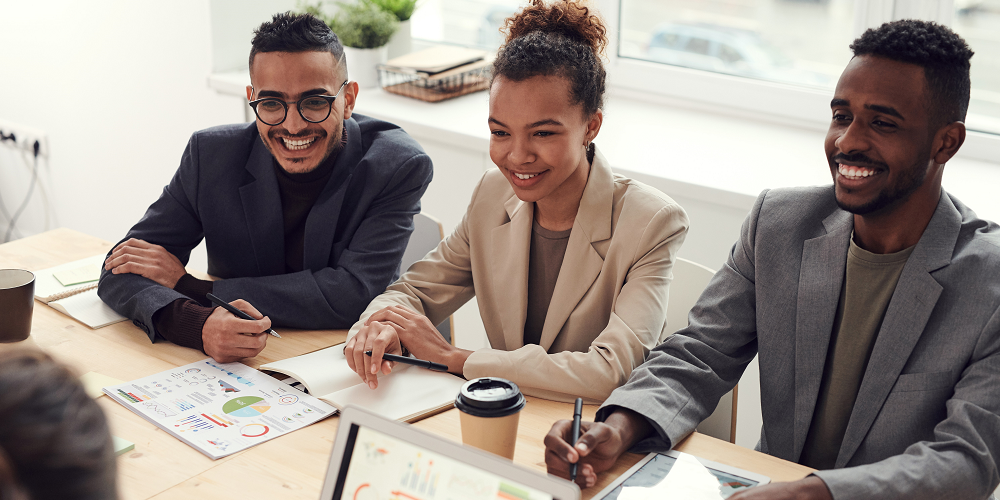 Definition of the strategic leadership style

Key skills a strategic leader must have

Pros and cons of strategic leadership

How to become a strategic leader

Organizations around the globe are looking to improve their leadership style, but it can be challenging to find the right one.

Choosing the right leadership style for your team is the best way to challenge old practices, mitigate risks, scale your organization, and communicate effectively.

That’s where strategic leadership comes in.

In this article, I’ll explain how strategic leadership works, how it compares to other leadership styles, and why it’s my favorite style so far.

Definition of the strategic leadership style

Strategic leadership is a leader’s ability to visualize, plan, lead, and make the best out of the resources they have to execute strategies efficiently and successfully.

Strategic leaders marry their strategic plan to their strategic management. Their organization respects their leadership role and overall vision while working to bring that vision to life.

Productivity and management mindset play major roles — how leaders think equals how they lead. A strategic mindset reflects something I call strategic agility: the ability to see how the big picture relates to the here and now.

Key skills a strategic leader must have 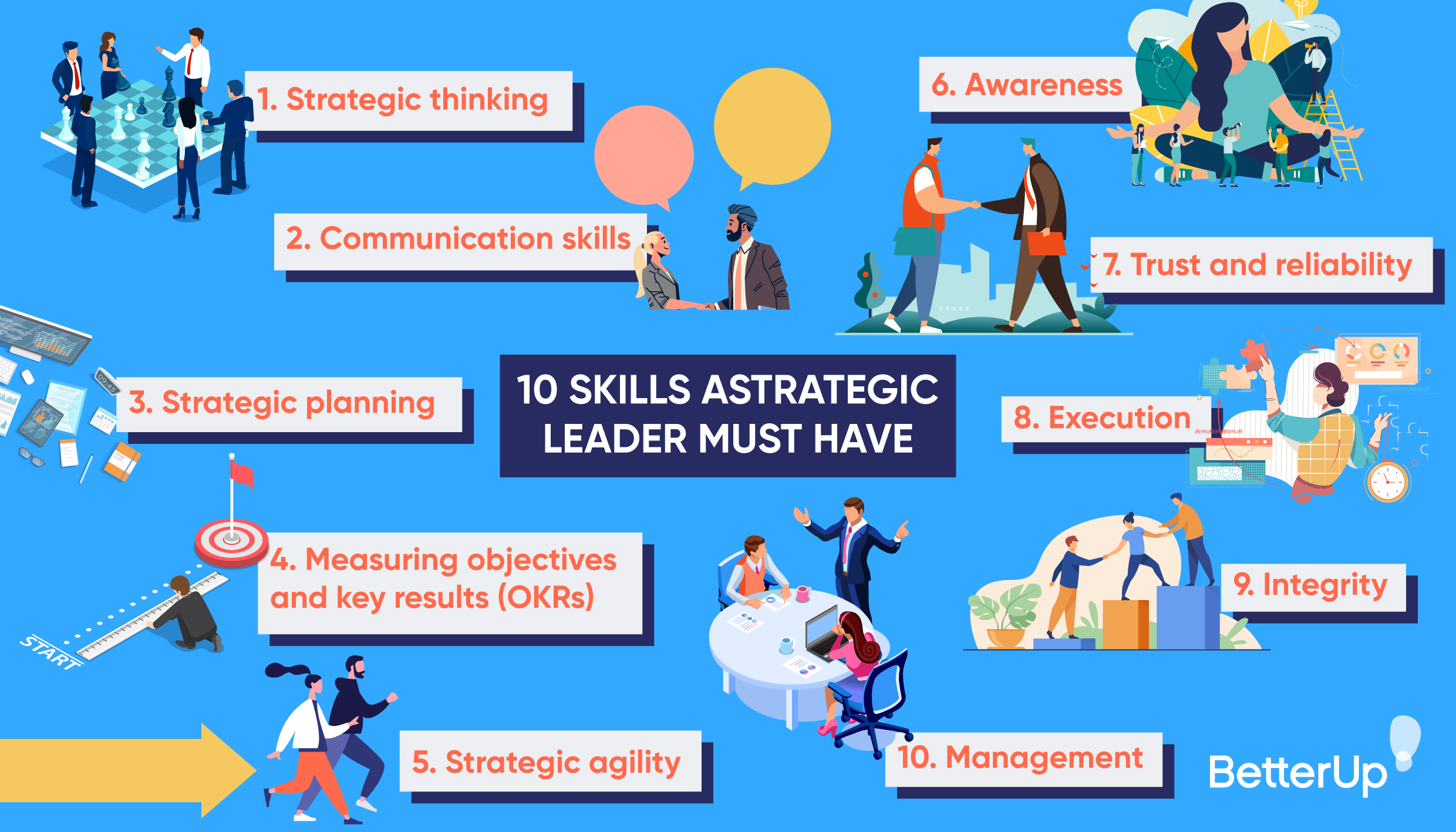 The top 10 skills a strategic leader must have are:

A strategic leader must first be a visionary and a strategic thinker. They think with the end in mind, and they only focus on necessary tasks.

Since organizations rely on systems to save time, money, and resources, understanding how to create systems for planned initiatives is crucial.

Strategic leaders must be able to create a goal-setting framework that defines and tracks their objectives and outcomes.

Being able to turn the organization’s long-term vision into daily objectives is an integral part of strategic leadership. Strategic leaders must have a wide perspective to be able to apply an overall vision to the here and now.

Strategic leaders understand how their actions and moods impact their teams. They think before acting, have emotional intelligence, and can control distracting or negative moods.

You can count on strategic leaders. They go after their goals with passion and determination, and they stop at nothing until their vision turns into reality.

Strategic leaders are masters at strategy implementation. They understand how to turn goals into action and action into results. They make the most out of their systems and resources.

Being grounded in integrity and compassion is an essential part of strategic leadership. Strategic leaders must be able to consider their team’s ideas, feelings, and perspectives before making decisions.

Strategic leaders understand how to lead a team. They know how to allocate resources, delegate responsibilities, and empower their subordinates to make decisions on their behalf.

Prominent leaders have shown us what success looks like when vision becomes an executed reality.

Here are three popular figures who have wowed us with their strategic leadership styles.

In November 2017, 41-year-old Katrín Jakobsdóttir was the second woman in the history of Iceland to be elected prime minister.

Jakobsdóttir is known for several strategic initiatives, but one of her most successful was taking preventative measures against COVID-19. As a result, Iceland faced the pandemic with very few casualties and are on their way to eliminating the virus completely.

Jakobsdóttir is also the chairperson of the Left-Green Movement in Iceland and holds a strategic position as Chair of the Council of Women World Leaders.

Her strategic vision for the future is fulfilling the Paris Agreement targets for 2030, which will put them on track to be carbon neutral by 2040.

Jacinda Ardern secured a historic election victory for prime minister in New Zealand when her party won the highest percentage of votes in more than five decades.

Just like Jakobsdóttir, Ardern acted swiftly to tackle the COVID-19 crisis. As a result, she was able to keep casualties to a minimum. Ardern is the first head of government to give birth in office since Pakistan’s former prime minister. She is also the first world leader to go on maternity leave in office.

She’s known for remaining consistent and direct about her leadership strategy. Within 36 hours of a terrorist attack that killed 50 people in Christchurch in 2019, Ardern reached out to politicians to tighten up gun laws.

A few days later, she announced immediate changes to ban assault rifles and military-style semi-automatics. She also offered emotional and financial support to families who lost loved ones, and did so in their native languages.

Jeff Bezos, the founder and CEO of Amazon, has brought his company’s stock up 225,233% and the company’s market cap up to $1.7 trillion.

Nearly two decades ago, in his 1997 letter to shareholders, Bezos said, “we believe that a fundamental measure of our success will be the shareholder value we create over the long term.”

Bezos’s strategy is focusing on things that don’t change and refusing to focus on short-term gains.

Bezos also emphasizes the importance of intuition, research, and deep knowledge of the market — especially the trends that drive it.

Pros and cons of strategic leadership 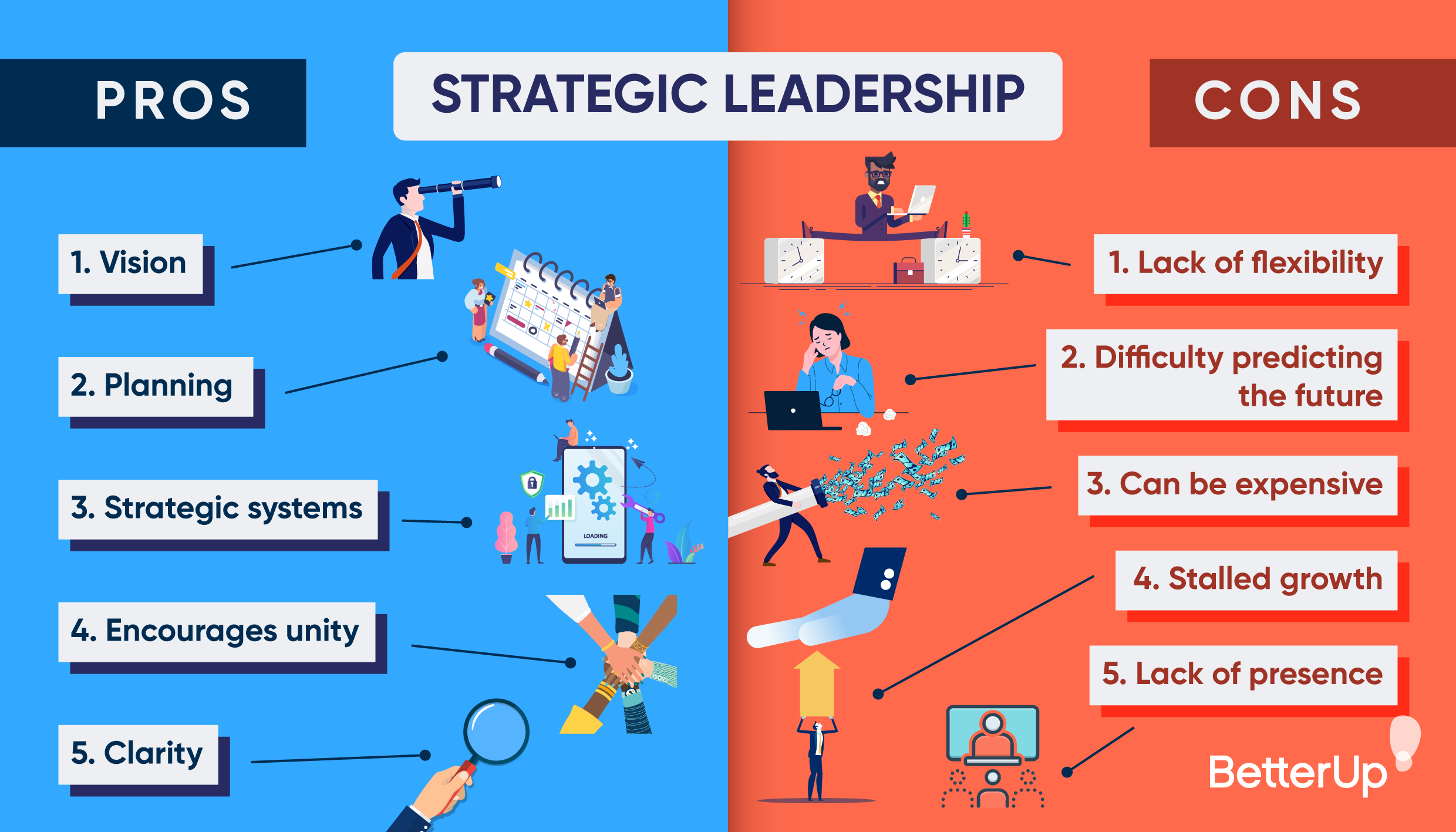 In this section, we’ll go over the potential pros and cons of strategic leadership.

Note: it’s important to keep in mind that not every pro and con will apply to every organization. Every strategic leader is different, and some are more effective than others.

Knowing that the US car industry was more advanced and efficient than their Japanese one, Toyota’s strategy involved studying its competitors to copy their best practices.

After years of studying American car makers’ production lines (like Ford), Toyota blended American processes with their own to create something even better.

Instead of just becoming another bank, PayPal used unconventional strategies to grow its empire.

PayPal adopted strategies like holding undisbursed funds in commercial interest-bearing checking accounts instead of engaging in fractional-reserve banking, and spending less money on technology (even though its technology platform is better than banks’).

Paypal also refuses to partner directly with banks. Instead, it focuses on building partnerships with merchants, being quicker to market than other payment innovation companies, and building trust with consumers.

How to become a strategic leader

Here are my top five tips on becoming a strategic leader.

1. Balance the present with the future

To become a strategic leader, it’s vital to balance the day-to-day with future plans.

Host weekly meetings with team members and departments, and/or ask employees to record daily or weekly issues in a shared system so you can stay up-to-date with any issues related to the strategic plan.

Instead of conducting business as usual, challenge old practices, create better processes and solutions, and motivate your team to do the same.

3. Have a risk management plan

Strategic plans work best when everyone’s on board. It’s crucial to be clear and get everyone on the same page. Effective communication creates powerful teams that not only support strategic initiatives but also propel initiatives forward faster.

Let’s examine how strategic leadership compares to other leadership styles:

Democratic leaders make decisions based on each team member’s input. Although the leader makes the final call, decisions are often made collectively.

For example, the democratic leader may open a discussion about a few decision-related options. After discussing the options, the leader may open the decision to a vote or consider their team’s feedback before formulating the final decision.

Like democratic leaders, strategic leaders recognize that everyone has to buy in to ensure the strategic plan’s success. Under strategic leadership, the leader communicates the organization’s strategic vision and influences others to adopt the vision.

Autocratic leaders are the exact opposite of democratic leaders. The leader makes all of the decisions without input from anyone who reports to them.

The leader doesn’t consider team members’ opinions before giving direction. Team members are expected to obey decisions at a time and pace specified by the leader. This leadership style is rarely effective or sustainable long-term but it can be good for dealing with crisis situations.

Strategic leaders typically adhere to a strict vision for the company, but team member input is still valued — as long as team members are open to new ideas and challenging the status quo.

This could mean having no major company policies around deadlines and processes, or it could mean putting their full trust into team members as they focus on big-picture items (like running the company).

Strategic leaders trust their team and value objective thinking, but not if it risks company growth or the strategic vision.

In other words, strategic leaders have the best balance and combination of the other three leadership styles, plus a few other tricks up their sleeve.

I hope this guide on strategic leadership will give your organization clarity on how to use this and other styles of leadership to improve.

What is servant leadership and how can it empower you team?

Servant leadership is all about prioritizing the greater good over your agenda. Learn how this style of leadership can help you empower your team. Read More
Diversity & Inclusion
13 min read | February 18, 2021

Regardless of industry, practicing inclusive leadership is a must-have for all leaders. Let's take a look at this leadership style and a few key behaviors. Read More
Diversity & Inclusion
14 min read | September 2, 2019

What we deem to be “the future” of work is constantly shifting, for obvious reasons. But if the last few years are any indication, work is becoming more than a job for many... Read More
Employee Experience
19 min read | June 9, 2022

Learn what the democratic leadership style is. Discover how to implement it in your business to create high-functioning teams involved in decision-making. Read More
Leadership & Management
13 min read | January 22, 2021

What is a leadership development program and why do you need one?

Coercive power can be useful in certain situations, but it isn't always the best leadership style. Learn about coercive power and how it impacts teams. Read More
Coaching
20 min read | June 24, 2022

These coaching leadership style examples highlight this collaborative approach to guiding a team. Use this guide to get started. Read More