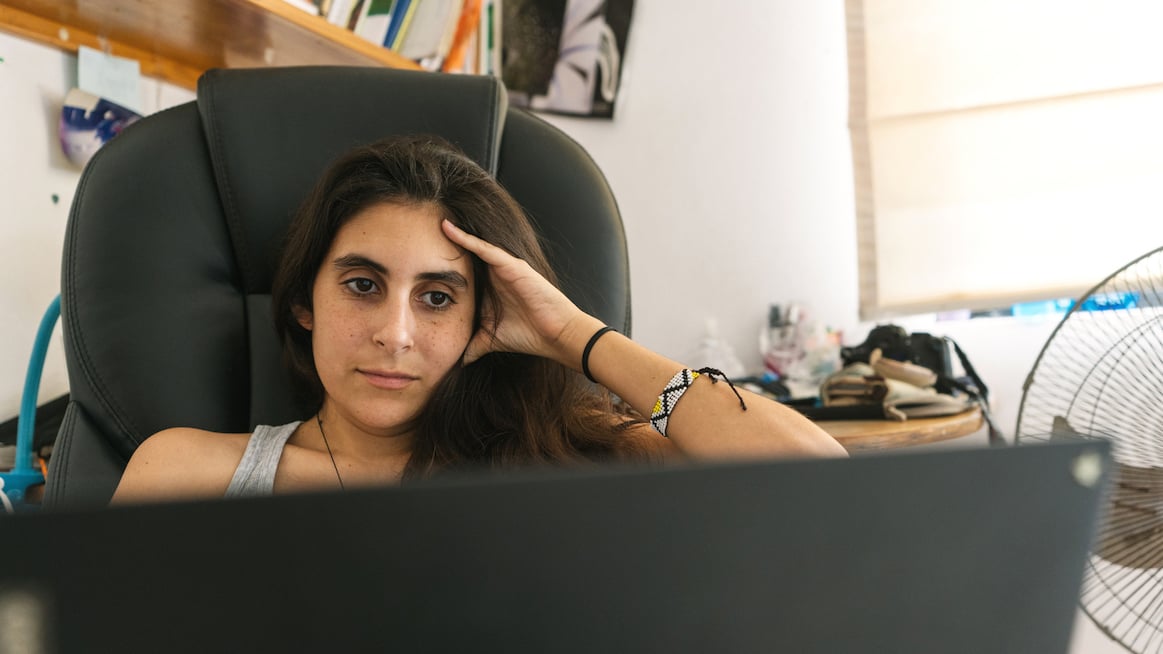 Inequality is not hard to spot in the world today. All around us, some people enjoy better access, greater privileges, and more opportunities based on factors like their gender, level of education, and skin color.

We know from previous research that underrepresented minorities (URMs) are disproportionately affected by mental health issues. Loneliness and isolation, two feelings that negatively impact one's mental health, are especially prevalent among URMs in the workplace. Our recent report on inclusive leadership revealed that URMs were 1.6X more likely to feel a lack of belonging in the workplace than their peers.

After combing through survey results from two data sets, we found the reality was more complicated.

On the surface, it didn’t appear that there were significant differences in the attitudes or even access to mental health resources between datasets. But re-examining the data through the lenses of gender and ethnicity yielded surprising results. Differences were found in some predictable places, but also in areas we weren’t expecting.

What emerged is a mosaic of different pressures, different needs, and even different words used to express those needs.

We turned to two different sets of self-reported data for answers. In July 2021 BetterUp Labs conducted a study on 1,693 nationally representative U.S. workers to examine whether mental health is getting in the way of our performance at work. The other data set was collected from over 18,000 full-time employees in the US, proportionately representing industries, job level, size of company, and gender.

First, before we talk about access, let’s consider how the unequal world affects people’s experience of mental health and leads to lower well-being. The data was messy here and points to varying experiences for different groups.

For example, we see that Hispanics and Asian American Pacific Islanders cite the experience of harassment at work as having a significant adverse impact on their mental health while African Americans reported higher levels of workplace-related discrimination impacting their mental health than any other group.

Across all groups, more than 65% of people say work-related stress is adversely affecting their mental health, while around 60% cite work-related pressures as an adverse impact. Toxic culture, which around 30% of respondents cited as an adverse impact, is a more ambiguous catch-all for the way workplace incentives and culture can bring people down rather than build them up or sustain them. The harmful effect of a toxic culture is one of the things that workers found themselves reevaluating in the space afforded by the pandemic.

This echoes our finding on loneliness and social support from prior research in 2018. While the experience of loneliness varied, it did not vary significantly by gender, race, or ethnicity. Instead your profession and your relationships and group memberships outside of work — two variables that weren’t part of this study — were the biggest differentiators.

There was also relatively little difference in people’s attitudes toward the acceptability of missing events due to mental health issues. Interestingly all groups found it more acceptable to miss work or job interviews than to skip a social event.

Using data collected from a nationally representative sample of full-time U.S. employees, we analyzed a variety of issues related to how populations use and get access to professional coaching, a resource that supports personal growth and improves well-being and mental health. Attitudes about coaching also suggest attitudes about seeking support and proactive engagement with one’s own health and development.

We knew from earlier research that there is a gender gap in coaching, that is, in a survey of US full-time employees, women reported both being more interested in coaching and being offered coaching less than men.

Surprisingly, men and women from underrepresented minority groups reported having the most experience with coaching. 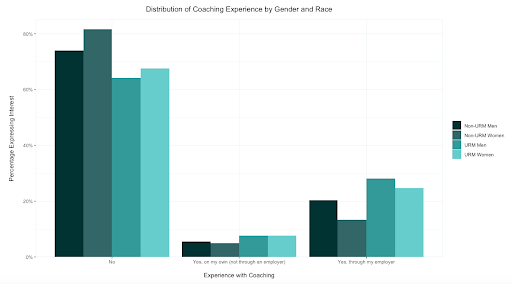 25% of women and 28% of men from underrepresented minority groups say they have received coaching through their work. This suggests that when employers recognize the benefits of coaching — improved performance, increased productivity, reduced attrition, etc. — and make these resources available, underrepresented minority groups are taking advantage of those resources relatively more than their majority counterparts. Men and women from minority groups are also more likely to seek out coaching on their own than compared to non-minorities.

The willingness to seek support and proactively engage in personal growth and development is an encouraging sign that these groups will embrace more resources to build mental health. Additionally, the stigma and cultural pressures against using mental health resources may be waning in URM communities as it has been in majority communities. 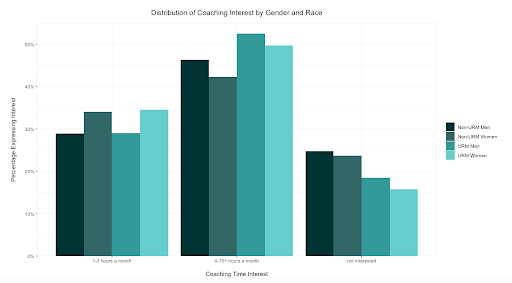 We also found that people from under-represented groups were interested in committing more time to coaching than their majority group peers. Those in majority groups expressed less interest in participating in coaching, with 25% of men and 24% of women expressing no interest whatsoever.

It is possible that the value of coaching is misunderstood or under-appreciated in majority communities. Other factors, such as feeling a lack of time or energy for investing in personal growth, could also be at play. Additionally, those in historically underserved communities may be more willing to use any additional professional and mental health resources they can get access to. 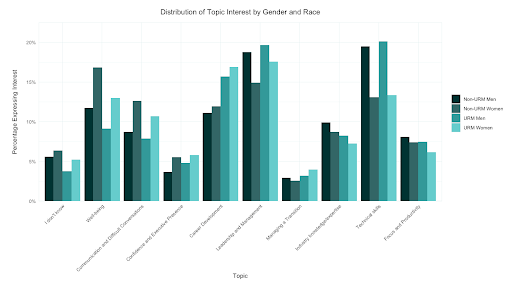 Lastly, we saw the most variation when it came to the topics respondents said they would be interested in for coaching. (Note: respondents weren’t actually receiving coaching.)

Men in both underrepresented and majority groups expressed far greater interest in receiving technical skills and leadership coaching than women, while women across groups showed relatively higher interest in well-being, communication, and confidence-building and executive presence. Men may perceive “hard skills” training as more practical and immediately valuable. It is also possible that they are less aware of their own need to improve in areas such as communication, difficult conversations, or well-being. Women may focus on the “soft skills” as a priority to navigate internal politics and perceived biases.

URMs expressed far greater interest in career development than those from majority groups. This underscores that the path to equity and equality in the workplace is still being paved and those from underrepresented groups still struggle with meaningful career development.

When combined with findings on coaching topics from BetterUp Member sessions during the pandemic, we see that women and URMs both in fact focused more on career development and well-being relative to the general population during this time. What this last set of data shows is what people actually ended up talking about with their coaches this past 18 months. The differences in topics tracked in part to gender and non-majority status, but it also tracked to people’s family situation, what was going on in the world and in their lives, and notably, their current state of mental health.

One other interesting insight was that women from majority groups expressed more interest in personal well-being than others, an interest born out in data on actual coaching topics in sessions. Women overall spent more coaching sessions on well-being relative to men, reflecting the multitude of stressors on women (often as mothers and caregivers) but also greater awareness of their own mental state and desire to improve it. This may also be due to less societal and cultural stigma against personal improvement for people in this group.

While the data shows the need for mental health resources is universal, it’s also clear that there’s no one easily definable need or fixed preference for support. Diverse workforces have diverse needs and preferences. They don’t necessarily understand or express their needs in the same way when asked or anticipate what they will actually find useful over time.

A few key takeaways from the data:

It’s encouraging to see organizations recognize that caring for the mental health needs of their workforce promotes positive business outcomes and leverage technology to bring mental fitness resources to the groups that need it most. But their approach is unfocused, costly, and inadequate at addressing the needs of their workforces at large.

Our own Dr. Omar Dawood pinpointed why the efforts of most companies fall flat:

“...The value of virtual care isn’t just about providing basic access or connecting people with clinicians. It's about creating a technology-enabled framework and backbone that provides a personalized high-touch experience for exactly where you are in your own journey and grows with you and your ever-changing needs.”

Meeting people where they are in their personal growth journeys and growing along with them requires a complex marriage of technology and real human connection. Mental health is not some binary state of being either ill or not ill. Our mental health is a continuum. We can strengthen our mental health through what we call mental fitness — developing the practices to improve and maintain a state of well-being and cultivating awareness of how we think, behave, and feel. Employers that provide access to resources that promote mental fitness see a 3.3X increase in employee retention, a 114% increase in productivity, and a 14% reduction in healthcare spend.

As we celebrate another World Mental Health Day, we hope that more organizations come to the same conclusion that companies like Google, Salesforce, Hilton, and Instacart have  — that providing personalized mental health resources and proactively investing in preventative mental fitness for all is not just good for employees, it’s good for business.

Mental health in the workplace: why is it important and what support is available?

From mental health to mental fitness: Raise the bar on employee well-being

Seeking help for your mental health is brave. And beneficial

Jump to section Mental health stigma is (starting to be) a thing of the past The benefits of seeking help 8 signs that you should seek help Where to seek professional help Read More
Well-being
10 min read | September 21, 2021