How to foster belonging and inclusion in the workplace 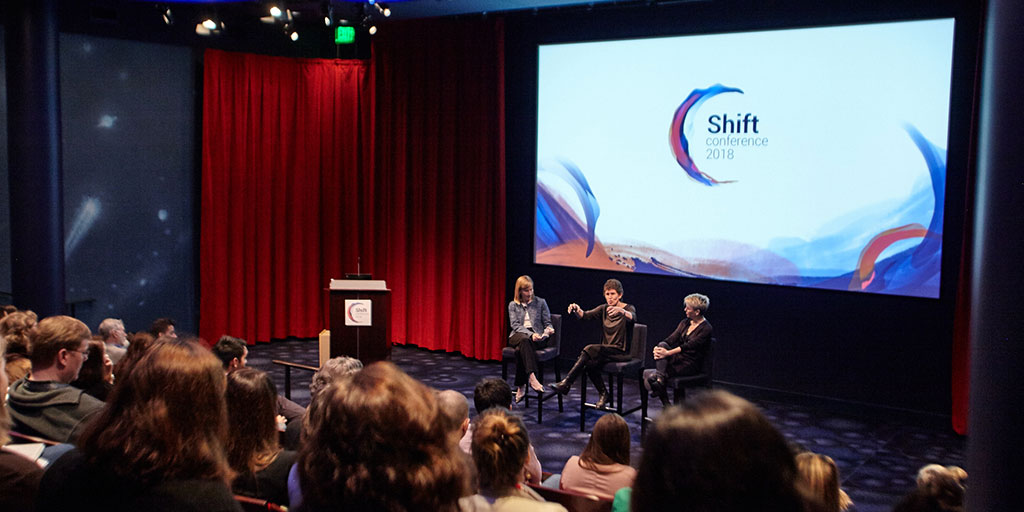 How to get started with inclusion and belonging

Handling resistant individuals who are crucial to the organization

How do we know our efforts are “working”?

The future of inclusion and belonging

Robin Ely and Fern Mandelbaum recently spoke in a fireside chat moderated by Ellen Levy at BetterUp Shift 2018. The event brought together the most innovative leaders and thinkers in HR and people development to discuss how to infuse greater meaning into the employee experience. Ely and Mandelbaum discussed some of the most effective practices for creating diverse and inclusive work environments, and recruiting diverse teams. They also explored the role purpose can play in helping underrepresented groups internalize a leadership identity.

You can access the recording for this session by registering for the Shift 2018 Digital Conference Experience.

Feeling included is a basic human need. When people feel a sense of belonging at work, they’re not only happier and more social– they’re also much more productive. A sense of workplace belonging builds confidence, which leads to greater flexibility, efficiency, and happiness at work.

Today, organizations are making strides when it comes to inclusion and belonging. CEOs and company founders are beginning to recognize that prioritizing and championing diversity, as well as inclusion, can increase productivity, as well as reduce employee churn. Happy, included employees stay at their companies longer, and they come to work with a positive attitude that’s contagious.

We had the privilege to discuss these topics in a fireside chat moderated by Ellen Levy, Managing Director at Silicon Valley Connect and former head of Corporate Development & Strategy at LinkedIn. Ellen sat down with Robin Ely, Professor of Business Administration and faculty chair of the Gender Initiative at Harvard Business School, as well as Fern Mandelbaum, Lecturer in Management, Stanford University and Partner at Vista Venture Partners.

Robin led a workplace inclusion initiative at Harvard Business School and currently conducts research on race and gender relations in organizations with a focus on leadership, organizational change, group dynamics, conflict, power, and identity. Fern teaches on inclusion and the entrepreneurial mindset at Stanford University, coaches CEOs on building companies, and works with companies and venture firms such as LinkedIn, Sequoia, and Intercom on inclusive leadership and building inclusive and diverse organizations.

How to get started with inclusion and belonging

Inclusion and belonging is a relatively new topic for many organizations. Leaders want to prioritize creating safer, more diverse workplaces, but aren’t always sure how to get started. So, how can an organization create a more inclusive culture?

Communicating a vision from the top

To really make progress, cultures need to change, and culture change is difficult to move forward without buy-in and leadership from those at the top.

According to Robin, the real challenge for organizations is that their cultures — the taken-for-granted way they do things — make it easier for some groups (e.g., men, whites) to thrive and reach their full potential. So to really make progress, those cultures need to change, and culture change is difficult to move forward without buy-in and leadership from those at the top.

“If there isn’t a vision at the top about where the company wants to go and a burning desire to go there, there’s not much that can be done to make lasting, meaningful change,” she said. “Just about any vision for the future entails recognizing and developing talent. Increasingly, if you want to hire the best people, you’ll be hiring people of different genders, races, ethnicities, religions, and so on.”

Fern echoed the sentiment, and focused on embracing the process. “When I work with companies, it’s critical that the CEO buys into the idea of inclusion and belonging,” she said. “I tell people to ask questions, not assume. We all gain awareness together. I hope everyone has an a-ha moment along the way through the sharing that happens in discussions and workshops. Once you have these a-ha moments, you can move towards change.”

Handling resistant individuals who are crucial to the organization

How do you deal with high performers who might not be bought into your vision of inclusivity?

Fostering a sense of belonging at an organization may be important, but not everyone is going to be invested in directing the time, energy, and resources toward inclusion initiatives. How do you deal with high performers who might not be bought into your vision of inclusivity?

Ellen posed a scenario in which a company had an employee that was critical to the organization, one of its highest performers. Unfortunately, that individual notoriously wouldn’t reply to emails, and would all but write off what others said. Even so, when the leadership team was asked if they would bring this high performer with them if they left for another organization, everyone said yes. Ellen wondered what can be done in this sort of situation, where you are forced to choose between a high performer and upholding cultural values.

“You can have one person on the team who says “no, forget that inclusion stuff,’” said Fern. “However, when there are two, three, or four individuals who are resistant, you have a problem.”

“When a CEO sees strides in productivity, it makes an impact.” — Fern Mandelbaum

According to Fern, the best way forward is to accept that everyone is in a different place in their journey. Once initiatives begin, she’s found that even the most resistant usually come along. These resistant individuals see that their employees are happy and productive. “We all know that when you’re not included, and you don’t feel like you belong, you’re not productive,” she said. “When a CEO sees strides in productivity, it makes an impact.”

How do we know our efforts are “working”?

The first, and arguably most important, question we need to ask with regard to these initiatives is “how do we know it’s working?” Are there quantifiable metrics we could use to measure our efforts?

Ellen joked that she wished there was an NPS-like measurement for understanding that belonging initiatives are working. After all, it would help quantify how important they are.

“Usually, these issues manifest themselves as a talent problem,” said Robin. “Many companies recognize that they’re hiring a very diverse group of highly talented people, but that their ranks become systematically less diverse as they look up the hierarchy, for example.” Robin recommended that companies start with a goal that is linked to advancing their mission—something they care deeply about. Such goals typically require getting better at recognizing and developing a diverse workforce.

Numbers — for example, increasing the proportion of white women and people of color in their senior ranks — can be an indicator that they are building their capacity to advance their mission, but numbers don’t constitute useful goals in and of themselves. Robin also noted that building that capacity can take a long time, and that well-intentioned companies sometimes lose interest when they see how hard it is and how much they need to change in order to become the kinds of places where all employees can thrive.

Fern talked about how going into an organization and talking about unconscious bias is not attractive to people, but if you present the conversation as one about mindset, it’s a much easier discussion. “We like to talk about growth mindsets, and yet talking about inclusion and belonging in companies is ultimately the same thing,” she said. “In order to incorporate these programs, we have to change our mindset to make actual, numerical changes.”

The future of inclusion and belonging

As a new generation comes into the workforce, will we see substantial changes? “My students in the last ten years are different than those who came before them,” said Robin. “They have different ideas about diversity than those who came before, who did not want to touch the topic. My students are much more interested in having conversations about gender, diversity, and other such topics than they were in the past. ”

Even so, Robin doesn’t see that the students are making different choices when they leave school. “These students are still going into the same kinds of job,” she said. “For example, I don’t see my students wanting to have a more balanced life — they seem to still be pursuing very conventional goals around success.”

More and more companies are recognizing that prioritizing workplace inclusion and belonging initiatives may be the key to productivity, retention, and overall team happiness. The wheels of progress turn slowly, but organizations are now taking the steps to create inclusive workplaces where everyone feels as though they belong.

Want to hear more about Robin Ely? Check out Rethink What You “Know About High-Achieving Women, her co-authored article in the Harvard Business Review, which details what Ely and her team found from their work at Harvard Business School. Ely has also published articles for The Huffington Post and Stanford University’s Michelle R. Clayman Institute for Gender Research.

Want to learn more about Fern Mandelbaum? Check out this article in Fortune Magazine that details “Entrepreneurship from the Perspective of Women,” Mandelbaum’s popular class at Stanford Business School.

Want to learn more about Ellen Levy? Levy has been called “the most connected woman in Silicon Valley” by Fast Company in an article the detailed her approach to networking and career.

What we deem to be “the future” of work is constantly shifting, for obvious reasons. But if the last few years are any indication, work is becoming more than a job for many... Read More
Diversity & Inclusion
8 min read | September 2, 2019

Today we celebrate International Women’s Day. This year’s theme #balanceforbetter encourages us to reflect upon what we each can do to build a gender balanced world. As an... Read More
Diversity & Inclusion
21 min read | October 15, 2021

Gender inequality in the workplace: The fight against bias

Gender inequality in the workplace is fueled by many factors. This article provides tips to avoid gender inequality for both employees and managers. Read More
Diversity & Inclusion
13 min read | October 26, 2021

Disabilities at work: A guide to understanding disability inclusion

Disabilities at work is an important topic to tackle. With nearly 25% of adults in the United States having a disability, accessibility is a major part of work. Read More
Diversity & Inclusion
16 min read | September 6, 2022

Looking for the best work-from-home jobs for moms? Check out this guide for some inspiration and insight, and learn the possible downsides of remote work. Read More
Diversity & Inclusion
7 min read | October 19, 2021

For working parents, a return to work (and back again) is stressful

The process of returning to work and a feeling of normalcy has been slow, especially for parents. Navigating school and unpredictable shutdowns is hard as ever. Read More
Diversity & Inclusion
17 min read | October 6, 2022

It’s crucial to promote equity in the workplace, but where do you begin? Here are 9 ways to establish and foster an equitable work environment. Read More
Diversity & Inclusion
7 min read | June 23, 2021

What do working parents need? A supportive manager is a good start

Working parents were crunched in the pandemic, especially women. But being a working parent is always hard. A supportive manager can help. Managers are in an ideal position... Read More
Diversity & Inclusion
16 min read | October 3, 2022

Going back to work after care-giving: How to make the jump

Many parents return to outside world after years of caregiving. Here are some tips and tricks for rejoining the workforce and juggling the balancing act. Read More