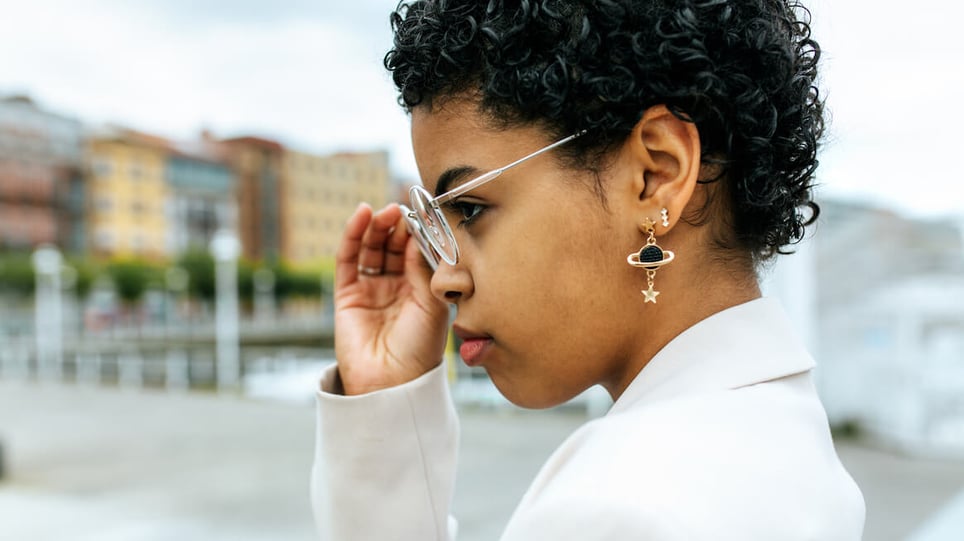 Why do people code-switch?

Addressing code-switching in the workplace

Do you have a “phone voice?” Then you probably know that moment where you recognize that voice on the other end of the line, and your “phone demeanor” relaxes. We all have different ways of presenting ourselves in different situations. We behave differently at work, with friends, and with the family members that have known us all our lives.

This shift is called code-switching — but for people of color, it’s a matter of survival. And if you don’t realize that it’s happening at your organization, it could be taking a toll on psychological safety. Keep reading to understand code-switching, why it happens, and what it means for inclusion at work.

The term code-switching was originally documented as a linguistic phenomenon. Sociologists, including John J. Gumperz, were interested in the circumstances that made dual-language speakers switch back and forth between their native language and the one spoken by the majority.

However, code-switching was quickly noted even in populations that spoke only one language. The term grew to encompass a set of behaviors beyond multilingualism. This could be changing our mannerisms, our tone of voice, or linguistic code-switching between standard English and a more relaxed vernacular.

Code switching is the ways in which a member of an underrepresented group (consciously or unconsciously) adjusts their language, syntax, grammatical structure, behavior, and appearance to fit into the dominant culture.

We all want to fit in, and we all make subtle choices to be more “acceptable” to the groups we’re with. This is called our contextual identity, and this adaptability is at the core of the human experience. But when our contextual identities are out-of-step with our authentic, absolute identities, we’re in trouble. In those cases, we’re not choosing to adapt — we’re forced to hide.

This is why code-switching can be so damaging for members of minority populations. If the dominant culture runs counter to our own, we might feel like our “natural” selves are unacceptable, unprofessional, unpalatable, and undesirable. Here are some examples of code-switching in the workplace:

A Latina woman is called in for a job interview. She chooses an outfit and does her hair, but decides not to get her nails done before the interview. Even though she takes a lot of pride in her appearance, she doesn’t want to seem “trashy” or “ghetto” by painting her long nails.

A white man from the Midwest decides to go by his middle name instead of his full name when he moves to the East Coast. He’s concerned his full name will make him sound “like a redneck.”

A Black man works in a high-end clothing store. Known for his loud voice and personality, he plays up effeminate mannerisms so he doesn’t "put off" the store’s mostly white clientele.

I pulled all of these examples from people that I know personally. Code-switching isn’t specific to race, gender, or socioeconomic status. Despite the diversity of experience, there are some common reasons why people change how they interact with different groups. 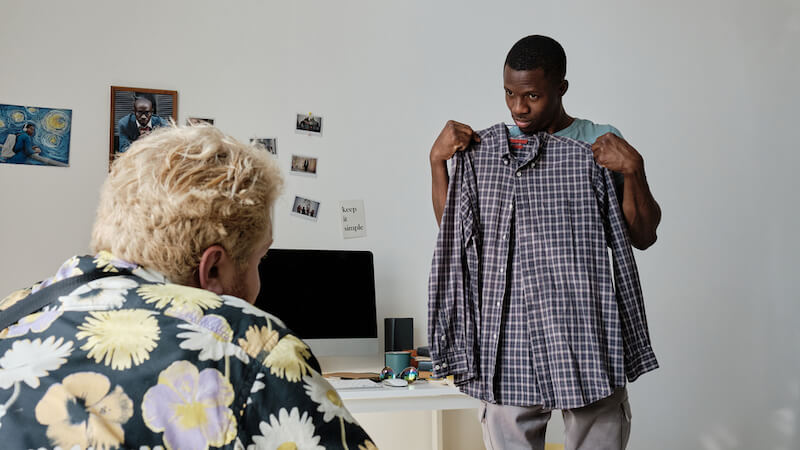 Why do people code-switch?

As we delve into the reasons why people code-switch, it’s important to note that not all of these are conscious or bad. The extent to which we feel we have to change who we are affects how we’re impacted by it. Let’s take a look at the reasons below:

The most common (conscious) reason for code-switching is to avoid validating negative stereotypes about your group or calling unwanted attention to yourself. Unfortunately, this is also the most damaging. It’s this kind of code-switching that leaves people feeling as if they’re not acceptable the way that they are. The damage comes less from the shift in behavior and more from the pressure to maintain an inauthentic facade.

2. To achieve a specific result

Another common reason for code-switching is to get something that you feel isn’t available if you don’t successfully ingratiate yourself with the dominant social group. Much like in high school, we try to strike the right balance of fitting in and standing out to move ahead. For people from underrepresented backgrounds, however, this can feel like trying to erase their cultural identity. Like my friends in the examples above, they may worry that calling attention to their identity will put them at a disadvantage.

In some extreme (but not uncommon) cases, this becomes a matter of survival. Black men and boys are often coached on how to act when they interact with law enforcement. In homophobic and transphobic environments, members of the LGBTQ+ community are often hyperaware of their appearance and behavior. These adjustments are the extreme side of trying to “escape” certain interactions without being “identified” as a member of an underrepresented — and therefore targeted — community.

3. Because they can’t help it

As we mentioned, not all types of code-switching are intentional. Sometimes, when we’re around people from different parts of our lives, we shift into that way of being. This kind of code-switching can actually be a very positive experience. For example, I spent every summer in Georgia when I was growing up. My husband often teases me about my “sometimes Southern” accent.

4. It expresses something that can’t be said another way

Certain languages and cultures have words or shared experiences that don’t translate well into the English language. When this happens, a person might feel like shifting back towards that language or identity is the best way to express how they feel. This also results in code-mixing, which is when people mix elements of two different languages or cultures.

Code-switching keeps us in contact with all the parts that make up our absolute identities. But for people of color, members of the LGBTQ+ community, and other marginalized groups, it can feel like only certain parts of their identity are welcome in professional settings. This has a negative effect on both belonging and employee well-being. 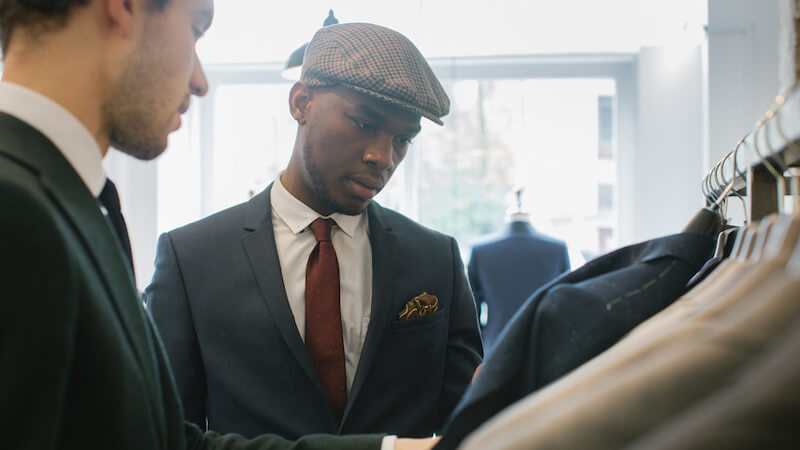 If we all do it, why bother addressing and understanding code-switching? Think of code-switching as a part of your “professional uniform.” You know that you have to appear a certain way at work, and that may not bother you. You may even like the clothing you’ve chosen. But it can get really uncomfortable when it’s all you’re allowed to wear.

When code-switching becomes inauthentic and involuntary, it has a detrimental effect on your employees. That’s because essentially, what they’re feeling is that “There’s no place here for me to be me.” In his article for Forbes, Dhru Beeharilal writes:

Whether done with conscious intent or habitually, it has been shown that code-switching can be a source of frustration, strain and burnout for minorities who recognize the perils of failing to switch — a lapse that can lead to negative consequences.

Beeharilal neatly underlines the paradox of code-switching at work — our neatly-curated workplace personas are part of who we are, but not all of who we are. Employing “authenticity” as a buzzword can leave a significant portion of your workforce feeling unsafe. Even worse, it might leave them feeling excluded from their teams, thinking “When you say ‘be yourself,’ you don’t mean me.”

Addressing code-switching in the workplace

Research published in Harvard Business Review found that Black people and other minorities face a professional dilemma: Should they suppress their cultural identity for the sake of career success? Or should they sacrifice potential career advancement for the sake of bringing their whole selves to work?”

The role of leaders who foster inclusion is to eliminate this dilemma. Unfortunately, when leaders and managers don't understand the extent of code-switching in their teams, it's hard to mitigate or overcome.

Achieving success in a given role will generally require hard work and some level of behavior change and skills development for any individual. But the behaviors and skills should be closely aligned to the desired outcomes. For example, to be a successful events planner requires a person to be organized and detail-oriented. No one should have to choose between being themselves and being successful. In fact, the emotional energy spent to “fit in” reduces collaboration and engagement at work.

Here are some ways to reduce the impact of code-switching on your employees:

Safe spaces are critical for people to drop their guards and connect with one another. ERGs can be especially welcoming and deserve a role in your diversity and inclusion efforts. They can provide spaces for people to say what’s on their minds, ask questions, and even opportunities for professional advancement.

Since one of the main reasons for code-switching is to fit in with the people that can help us move our careers forward, connecting with inclusive leaders is a must. It gives people a way that can they be successful without having to compromise those “hidden” aspects of their personality.

The more diverse your company is, the less oppressive the dominant culture feels. Emphasize diversity in both overt and subtle ways. Offer educational opportunities, invite people in to speak, and keep yourself accountable with your diversity hiring strategy. Continue to grow your team as you celebrate the different voices — and experiences — in your organization.

4. Continue to educate yourself

As a leader, one of the most important things you can do is learn how code-switching affects your employees — and potential employees. Once you begin to understand it, you’ll recognize it everywhere.

For example, you may see that your multilingual employees don’t emphasize their skills because they’re worried about becoming the “office translator.” You may see that job candidates from different ethnicities might need more than a single conversation to let their guard down or talk about their accomplishments. Those who speak English (even fluently) as a second language may always wonder if they’ve made a mistake. The list goes on.

The hidden work at work

Understanding how the need — not just desire — to fit in at work affects your employees takes an extraordinarily high level of cultural humility. It’s an extra level of work and awareness that they have to have every day. Understanding that this can be a burden — and a barrier — that prevents them from showing up as their whole selves at work.

We are saddened, troubled, and frustrated by the injustice, senseless deaths, and violence that recently occurred and what this means for the Black community and our nation. Read More
Employee Experience
21 min read | October 12, 2021

Companies are embracing diversity and inclusion, but data shows that perceptions differ among minority groups about the climate of the workplace. Read More
Employee Experience
11 min read | January 7, 2022

Neurodiversity is an oft-overlooked component of DEI - but it can be an important untapped resource. Learn how neurodivergence can help your team thrive. Read More
Employee Experience
13 min read | January 12, 2022

Merit increase — what is it, and why does it matter? Find out 4 reasons why your organization needs merit increases and start calculating your impact. Read More
Diversity & Inclusion
12 min read | February 10, 2022

What's the deal with gender pronouns? It's a simple way to create a more inclusive, welcoming environment. Learn how to ask for and use pronouns at work. Read More
Employee Experience
11 min read | February 28, 2022

Understanding invisible disabilities in the workplace

Learn what invisible disabilities are, how they affect your employees, and what leaders can do to increase empathy toward those with hidden disabilities. Read More
Employee Experience
11 min read | April 7, 2022

What happened at the Oscars was unprecedented — but it sparked conversations about when jokes go too far. And it’s more than one person that gets hurt. Read More