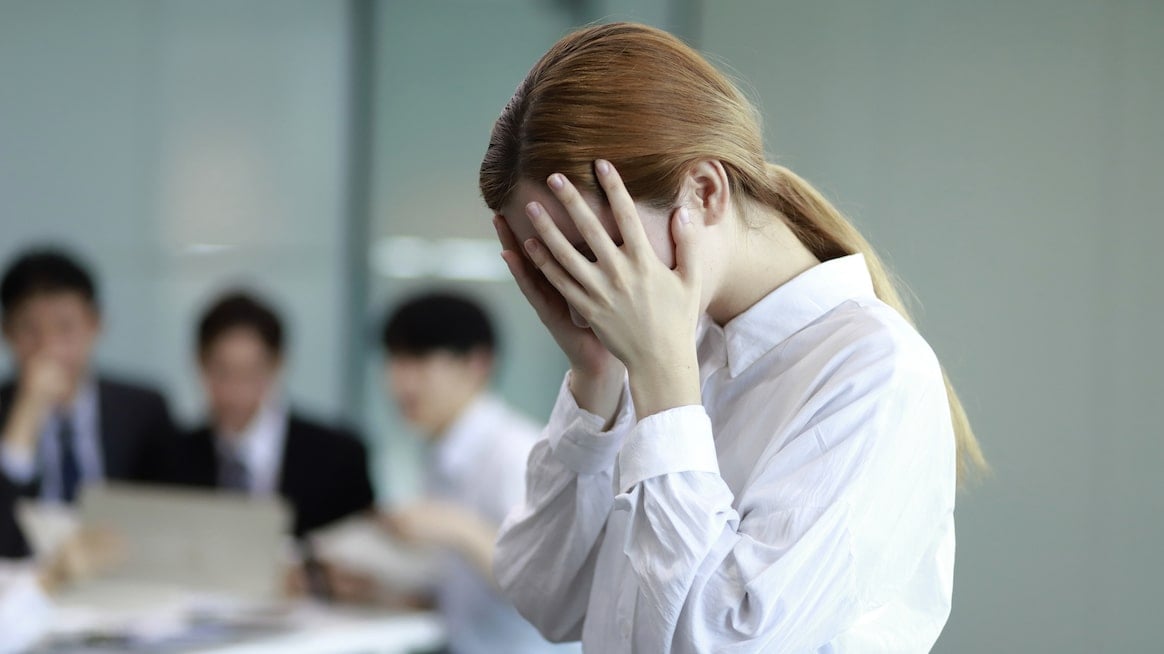 Workplace experience can vary widely based on any number of factors. One worker’s love for conversation and friend-making may make her in-person, highly collaborative position a dream job. But that dream job may look more like a nightmare for an introvert who prefers to focus on independent projects from his home office.

Factors other than personality influence employee workplace experience, too. Gender, sexual orientation, identity and self-presentation, race, national origin, religion and ability can shape someone’s experience on the job. And in the last few years, these patterns have grown more exaggerated.

Take, for example, the experience of women working in male-dominated industries. While high-profile employers have made focused efforts on boosting representation among their ranks in recent years, certain professions have remained decidedly male. These professions include civil engineers, computer programmers, construction managers, truck drivers, mechanical engineers and software developers.

In each of these professions, women comprised fewer than 21% of workers in 2021, according to data from the U.S. Bureau of Labor Statistics. Women of color had even less representation: Black women made up just 0.5% of U.S. civil engineers last year.

We could continue to review statistics flagging related inequalities in male-dominated workplaces, numbers that tell of wage gaps, sexual harassment, and gender discrimination. But we want to focus on an aspect of the male-dominated workplace that’s under-discussed: The well-being of women and others who fall outside a cis-male profile.

While statistics abound on other topics, we don’t often hear much about the emotional experience of those outside the majority in these types of workplaces. This data focuses on the experience of people who identify as women. How does their experience compare to that of their male counterparts? And what actions might that information prompt?

To explore these questions, we looked into data we collected in December 2021 as a part of our working parents survey. The poll comprised 584 parents working full-time in the U.S., with the audience nearly split between mothers and fathers (49% and 51%, respectively). We parsed the data by gender and industry, splitting responses into male-dominated industries and non-male dominated industries.

Male-dominated industry or not, the data show that women experience a great deal more stress than their male counterparts. Seventeen percent of women reported feeling on edge compared to 6% of men. The same amount of women said they experience “a great deal of tension” in their daily lives, while 9% of men agreed. The most drastic difference occurred when we asked about stress. Twenty-eight percent of women said they often felt stressed out. Eleven percent of men agreed. 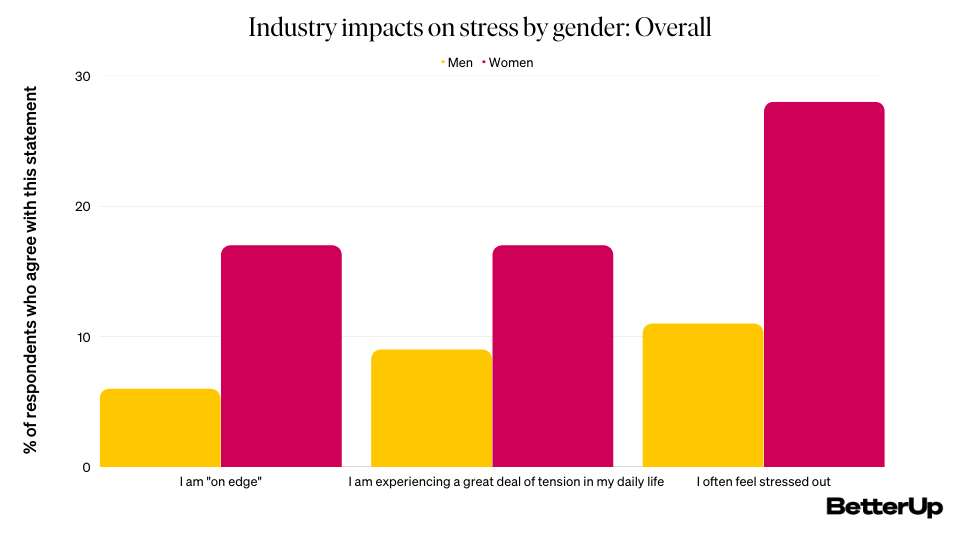 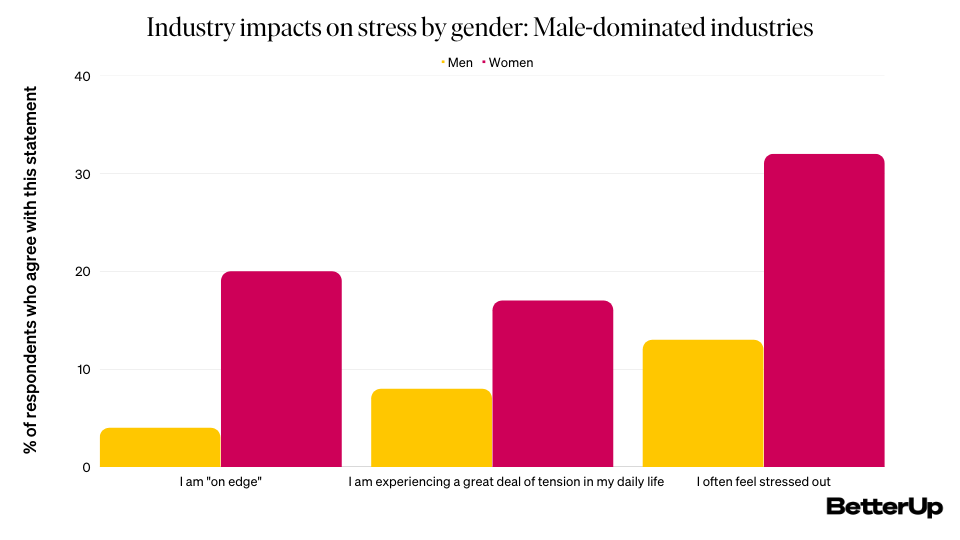 Organizations need to consider burnout, performance, and quitting through additional lenses like sex and gender

Many organizations are paying more attention to the emotional health of their workers, both due to the growing awareness surrounding mental health issues and a burgeoning understanding of the impact they can have on the workplace.

It follows that efforts to ease stress, tension, and other signs of burnout would benefit employees while also boosting the bottom line — a connection many organizations are making in their quest to address worker mental health. As they strategize, however, it’s clear that conversations about workplace stress require a high level of nuance when it comes to who’s experiencing the stress and why.

Our data revealed that it’s more common for women to encounter stress and feel on edge when working in male-dominated industries. This data doesn’t tell us whether the stress stems from their femaleness and added societal expectations of being female, or simply from not being male, from being in the minority in the workplace. It doesn’t tell us if it comes from explicit discrimination and exclusion or from the difficulty of navigating a workplace where everything — equipment settings, temperature, scheduling, performance standards, social patterns — is designed around a male standard.

Yet the findings point to a clear need for organizations to consider burnout, performance, and quitting through additional lenses. When organizations convene to combat workplace stress and burnout, it’s essential they consider how their workforce encounters these phenomena by looking at demographics — perhaps using sex or gender as a starting point.

The data also highlight the need for male-dominated industries looking to bolster representation to consider the challenges women may face when entering such professions. Organizations like Girls who Code are making headway in giving young women the skills to pursue careers that once belonged exclusively to men. But employers need to match such efforts to build technical skills and even softer skills by ensuring they enable women to join their ranks and empower them to succeed there.

What might that entail? For starters, looking at their own recruiting practices and identifying and mitigating areas of explicit or unconscious bias, broadening the candidate pipeline, and considering how the environment and their own actions might shape how a candidate shows up. Another area with ample room for improvement: make conscious efforts to lead inclusively and create a culture of belonging where the women or people of color who get in the door find it a worthwhile place to stay. Employers can move in on this goal by taking a wide range of actions, from setting up mentorship programs to enacting strong policies around benefits like maternity leave.

Without progress on representation and inclusion, women will likely continue to experience workplace stress in greater numbers than men, especially in male-dominated industries. It’s up to employers to address the root causes of this problem or risk the realities of unequal stress burdens and the resulting stress-induced burnout.

What do working parents need? A supportive manager is a good start

Working parents were crunched in the pandemic, especially women. But being a working parent is always hard. A supportive manager can help. Managers are in an ideal position... Read More
Well-being
6 min read | September 14, 2021

Considering all they have on their plates, it’s no surprise working parents are feeling the pressure this fall. Yet many don't feel support from their organizations. Read More
Research & Insights
8 min read | June 30, 2022

As we begin thriving cognitively, emotionally, and socially, our focus shifts from working on ourselves to making an impact on others. Read More
Research & Insights
6 min read | August 30, 2022

The science behind Inner Work®

Innovations in coaching: Growth through connection for an evolving world of work

We sat down with coaching industry experts to discuss where the industry is headed, the impact of technology, and the role ethics play as the field matures. Read More
Research & Insights
10 min read | September 6, 2022

The mental and emotional well-being of working parents plummeted during the pandemic. Here's what they are using to preserve and bolster their mental health Read More
Research & Insights
9 min read | April 5, 2022

Believe it or not, not everyone wants to work from home. Here’s why.

Remote and hybrid work arrangements are quickly becoming the new normal. But not everyone is excited about the prospect of working from home indefinitely. Read More
Research & Insights
8 min read | February 23, 2022

Many working parents feel guilt, but some groups feel it more than others