What is groupthink and how do you avoid it? 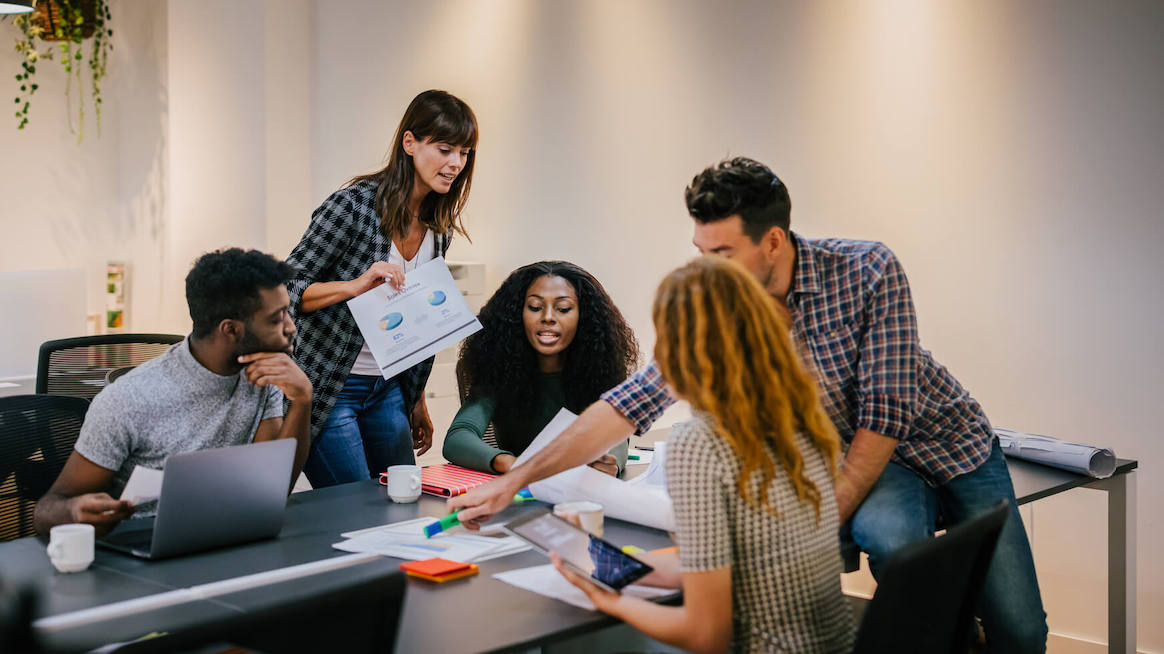 8 groupthink symptoms to look out for

How do you avoid groupthink?

In 2017, Pepsi ran a Black Lives Matter ad featuring Kendall Jenner. The ad showed the white celebrity handing a Pepsi to a police officer, to quell building tension during a Black Lives Matter protest. That ad was a massive fail. The question on everyone’s lips was, “How did no one stop this?”.

There were six key people listed as credits for the advert. Is it safe to assume that all six of them thought it was a good idea? Maybe. But a more reasonable explanation would be that the team members who thought it was a bad idea stayed silent for the sake of group cohesiveness. In order words, they succumbed to groupthink.

This article covers everything you need to know about groupthink. We’ll talk about what it is, the causes, negative effects, symptoms, examples, and how to avoid it.

Groupthink is the tendency for people to unanimously support a popular opinion or decision. They choose group consensus over critical thinking. When groupthink happens, people silence their own objective thoughts in favor of conforming.

Doing so might feel good because it facilitates teamwork and collaboration.  Unfortunately, it also prevents people from challenging ideas that may be ill-advised or even harmful.

William H. Whyte Jr. coined the term in 1952, but it became widely known through Irving L. Janis' 1972 book Victims of Groupthink. In the book, Irving cites examples like the 1961 Bay of Pigs where President JF Kennedy makes bad decisions to attack Cuba and ends up losing.

This psychological phenomenon is especially common in small groups where there’s high cohesion.  Friendship or shared goals can get in the way of productive friction. There’s often dominant culture, a set-in group identity, tricky group dynamics, and strong pressure to conform. This cohesion creates a silencing environment where members don’t speak up with contrary viewpoints.

Groupthink is a collective failure to think independently.

How does groupthink impact behavior?

When people fall victim to groupthink, they play up harmony and consensus over independent judgment. This can lead to self-censorship and even unethical behavior influenced by groupthink.  Some negative effects on behavior include:

How does groupthink influence teams?

Groupthink leads to overconfidence, which leads to risky decisions teams would not normally make. It also stifles creativity.

According to the Journal of Business ethics, groupthink causes teams to adopt defenses that influence the way they:

Throughout history, groupthink has often led to unwise decisions in business, politics, and society. A good case study is the Challenger Space Shuttle disaster. NASA launched an ill-fated spacecraft despite warnings not to. The spacecraft crashed in 73 seconds, killing all seven people aboard.

Another popular example is the Bay of Pigs invasion. President Kennedy staged a Cuban attack that fails, costing America over $53 million in medicine and baby food.

Examples of groupthink in the workplace

Groupthink doesn’t happen in government and politics alone. In the workplace, we’ve seen evidence of groupthink in notable business fails like Kodak and Swissair.

Kodak was the front runner in photography until it went bankrupt in 2012. A former executive says management ignored research that showed they had 10 years to prepare for digital photography.

Management continued blind investments in the photography model they were accustomed to. As a result, they made several costly decisions in those 10 years and finally filed for bankruptcy in 2012.

Swissair: The grounding of the “Flying Bank”

Now bankrupt Swiss airline, Swissair, was so financially stable in the 1970s that people dubbed it the “Flying Bank."

Shortly before the airline went bankrupt, management reduced the number of directors. This move eliminated dissenting opinions and industrial expertise. The remaining directors had similar backgrounds and shared common values, making it easier for them to agree on most things.

Swissair fell prey to groupthink and adopted an acquisition strategy that led to its doom.

I was curious whether groupthink still exists in today’s workplace, so I reached out to a few team leaders I know. Turns out it still does.

Shayla Price, Founder of PrimoStats shared that groupthink led “my team to adopt an expensive PR strategy with no clear KPIs in a previous role. This experience led to a frustrated leadership team along with no quantifiable results.”

Shayla’s team launched a new branding campaign. With little research, they concluded that a New York-based PR agency would offer high visibility for new markets. They were wrong.

Shayla shares that because they 100% believed in the agency, they “failed at holding the agency accountable. There were no mediums set up to track success. We didn’t add UTMs to the campaign and didn’t see any spikes in traffic in Google Analytics. The PR agency just ended up mentioning our campaign in a few publications.”

8 groupthink symptoms to look out for

All these cases of groupthink have one thing in common; a blind sense of invulnerability. Social psychologist Irving Janis documents the eight symptoms of groupthink as:

There is a high risk of groupthink when members come from a similar background. Groupthink is also likely when a group is protected from outside opinions, and when rules for decision-making are unclear. Here are some common causes:

Nobody wants to be the outsider in a group. When people fear negative consequences for sharing contrary opinions, they self-censor.

Take the failed Pepsi campaign, for example. An advertising expert shared that the Pepsi ad went live most likely because people are afraid to speak up in in-house creative teams.

“Take a strong stand at an outside agency and it’s expected. Do it in-house and you’re a boat rocker in need of an attitude adjustment,” says Dan Goldgeier.

Groupthink is less likely when people come from differing backgrounds. They’ll often have different life outlooks and social values. Together, they can provide arguments that reflect a holistic view in discussions.

In the failed Pepsi campaign, for example, all six key people on the team were white. They were unlikely to understand how black people would respond to the Black Lives Matter campaign.

Groupthink is more common in groups where there’s a “strong” leader, or where there are specific people who wield more power. When the popular person airs their opinion, more people are likely to support it.

That’s to say, groups with closed leadership styles are more susceptible to groupthink. 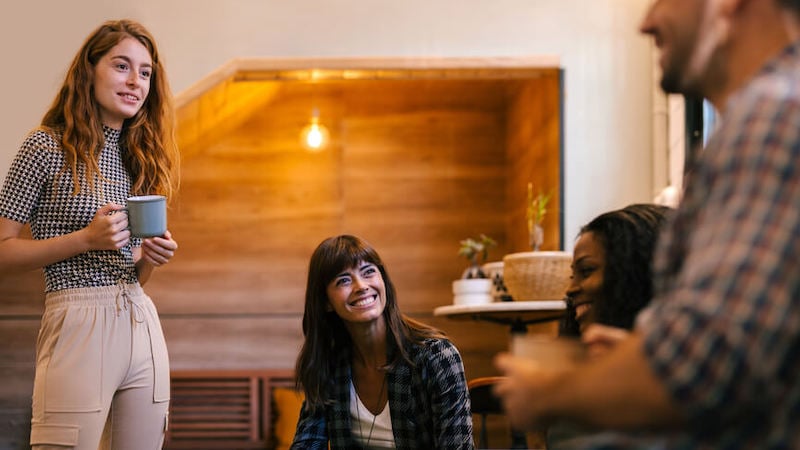 How do you avoid groupthink?

If you’re ready to reduce groupthink and its effect on your team, here’s what to do.

How to avoid groupthink

Several studies show that diverse teams produce better results. This is true even with team meetings and discussions.

If you’re looking to serve a diverse market, it makes sense to involve people who represent that market in the decision-making process.

Being an inclusive leader is about more than just making sure you have some diverse people on your team. Inclusive leadership skills enable the team to see and appreciate the value of diverse perspectives.

The day-to-day behavior and actions of the group leader set the tone. People feel seen and valued. The whole team understands the value and importance of productive differences over consensus.

For example, if you are leading the discussion, try not to dominate the room with your own opinions and preferences. Emotionally intelligent leaders include team members in discussions rather than dictate to them.

Treat all members of the group with equal respect to foster trust. This will help individual members understand that their voices count just as much as the voices of popular team members.

Make an effort to understand each individual on your team and how they like to communicate so you can prompt them in that way. For example, That way, they’ll feel connected to you.

A culture that encourages psychological safety will help people speak up without fear.

Most teams will have quiet voices as well as loud ones. That is part of being diverse. But loud voices will often overpower quiet ones.

Make an effort to understand the difference between diversity versus inclusion. That way you can encourage the quieter members of your team to contribute as well. A good way to do this is to ask people to raise their hands to speak in meetings. Or to ask questions, starting with the quiet voices first.

In hybrid and remote work, you have other options. Try using polls or other collaboration tools in a working session or meeting. Use async independent brainstorming or reviews to incorporate more thinking before group sessions.

One prompt Primostats’ Shayla Price uses to encourage quiet voices is to call everyone’s attention to groupthink. That way, she reminds her team that she values their opinion.

“When I witness groupthink amongst my teams, I speak up by asking contrary questions or express my concerns about groupthink. My actions have resulted in more honest conversations about strategic planning,” says Shayla.

Suppress groupthink and reap the benefits of better decisions

Groupthink can be a serious impediment to effective teamwork. It can cause people to make poor decisions that they wouldn't make individually. People also become afraid to present something new and innovative.

Ideally, people should work together without feeling like they need to hold back their thoughts. That requires a culture of trust, respect, and belonging. Eliminating groupthink will improve working relationships, cultivate creativity, and lead to better decisions. The best place to start? Diversity, inclusion, and belonging.

Stuck in the middle: What is lost with a workforce that isn’t ill, but isn’t well

The human crisis of employee mental health today is a business risk. Companies risk being blind-sided by employees who aren't in crisis or at their best. Read More
Well-being
6 min read | March 23, 2021

This election season seems hard. More than 50% of us are lonely. Many burnt-out. We asked a panel of coaches what they’re seeing and what to do about it. Read More
Well-being
7 min read | August 6, 2020

You may be an optimistic person, but do you know how to cultivate optimism in others? Here is how to encourage optimism, courage, and growth. Read More
Well-being
14 min read | July 16, 2021

Bringing your whole self to work — should you?

Learn how and why bringing your whole, authentic self to work allows you and your organization to thrive. Read More
Well-being
13 min read | January 31, 2022

10 ways to overcome adversity and thrive during hard times

Everyone faces adversity, some more than others. Learn from this brief overview what adversity is, some examples, and strategies to help you overcome it. Read More
Well-being
12 min read | July 8, 2022

Improve self-control: 10 tips that will put you in the driver’s seat

Here’s our guide on how to improve self-control. Find out what you need to take ownership of your life. Read More