What are self-managed teams (and how can you create them)? 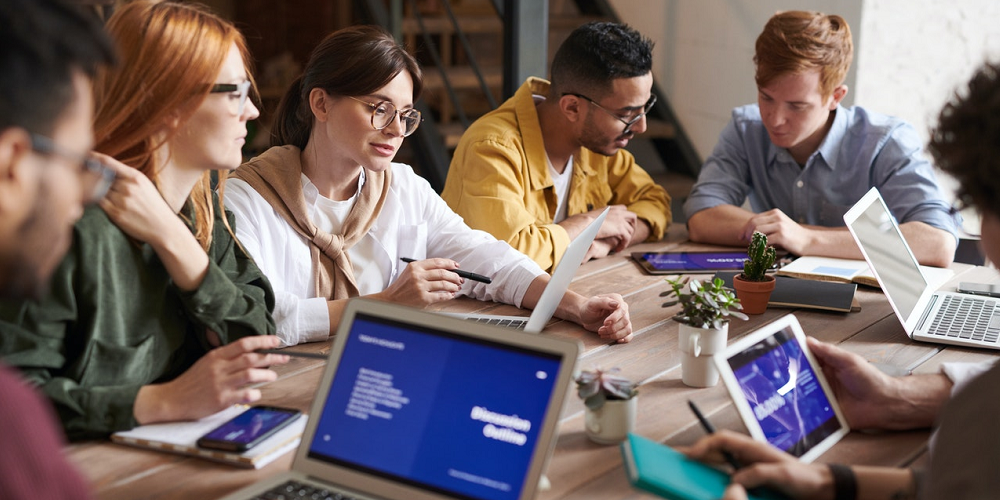 We all know teamwork makes the dream work. But does every team need a manager at the helm?

Even though hierarchies and defined leaders have reigned for most of the industrial age, some companies are reconsidering whether that structure still works for their business.

Self-managed teams are becoming more popular at companies of all sizes. But how do they work, and how do you know if they’ll work for your business?

Many companies stick to the traditional team management hierarchy because that’s what they know.

The traditional manager role may be quickly disappearing in response to calls for new ways to look at team management. In fact, 37% of managers think their position will disappear in the next five years.

Here are four alternatives to the traditional management style. 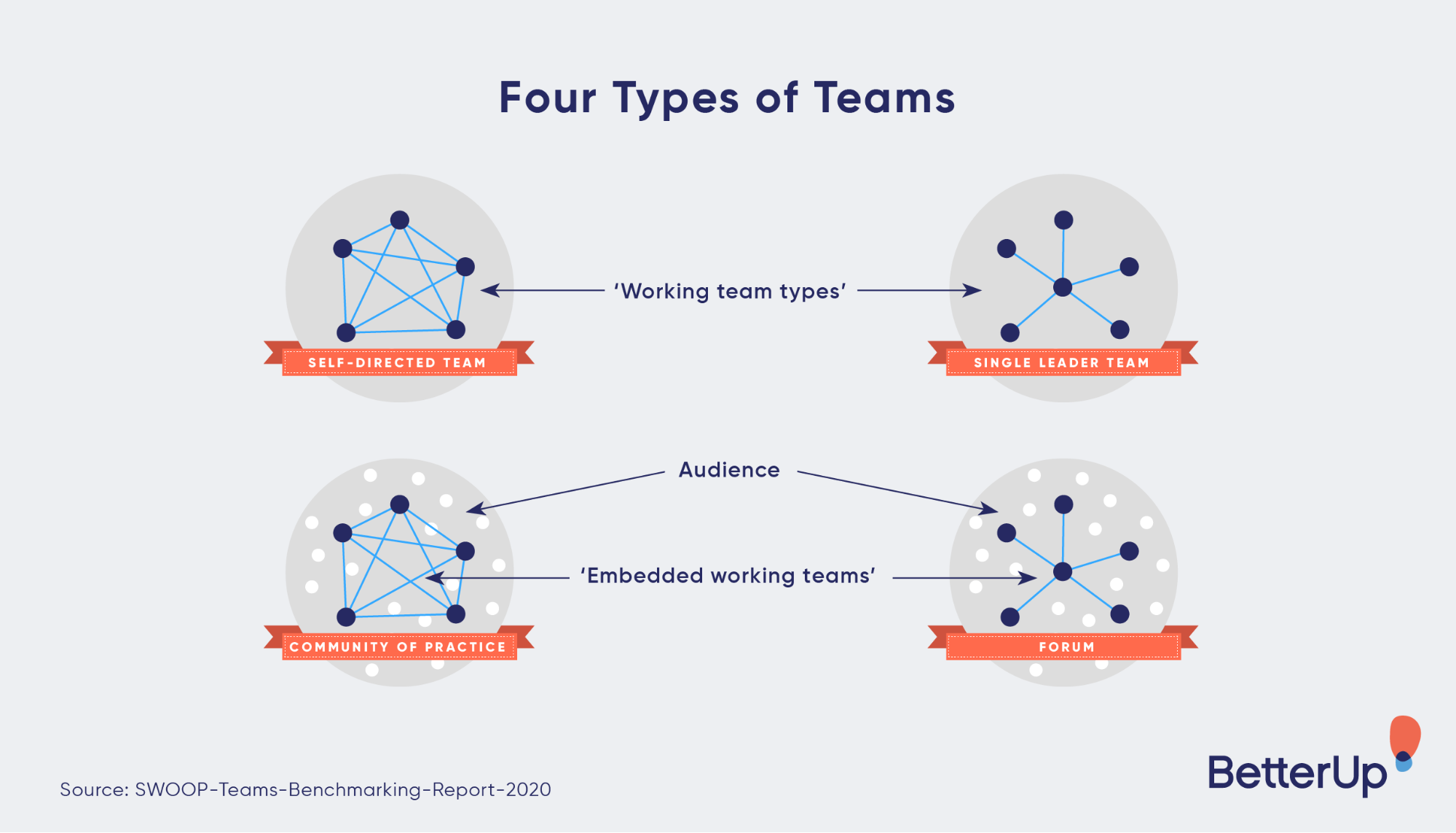 Project teams are cross-functional groups with specialists from different departments who work together on specific projects. A project manager often leads these teams.

A project team usually works together for a fixed length of time and disbands once the project is complete. These teams may be measured on outcome but are often measured on execution to a plan (e.g., completing tasks with a defined time and budget).

A self-managed work team is a small group of employees who take full responsibility for delivering a service or product through peer collaboration without a manager’s guidance.

This team often works together long-term to make decisions about a particular process. These teams may be measured either by output or outcome, with outcome being the better choice.

A virtual team consists of employees from different regions working remotely or in different offices. They primarily communicate through video conferencing, phone calls, messaging, and email. Any of the other team types may also be a virtual team.

Operational, or functional, teams are groups of employees dedicated to a specific ongoing role, like customer support or sales. All the members of an operational team support one overarching goal and process. They tend to measure themselves on output rather than outcome.

While self-managed teams aren’t new, they are seeing a surge in popularity as remote work becomes the new normal. Plus, with managers feeling less supported by the organization and less able to effectively navigate rapid change, more teams may experiment with self-management by choice or necessity.

Self-directed teams take full ownership and responsibility to drive business results for a particular process. Unlike an operational team, most self-managed teams don’t have a hierarchy. Instead, self-designing teams have more autonomy over their processes and roles within the bounds of what team members agree is needed to achieve agreed upon team outcomes. 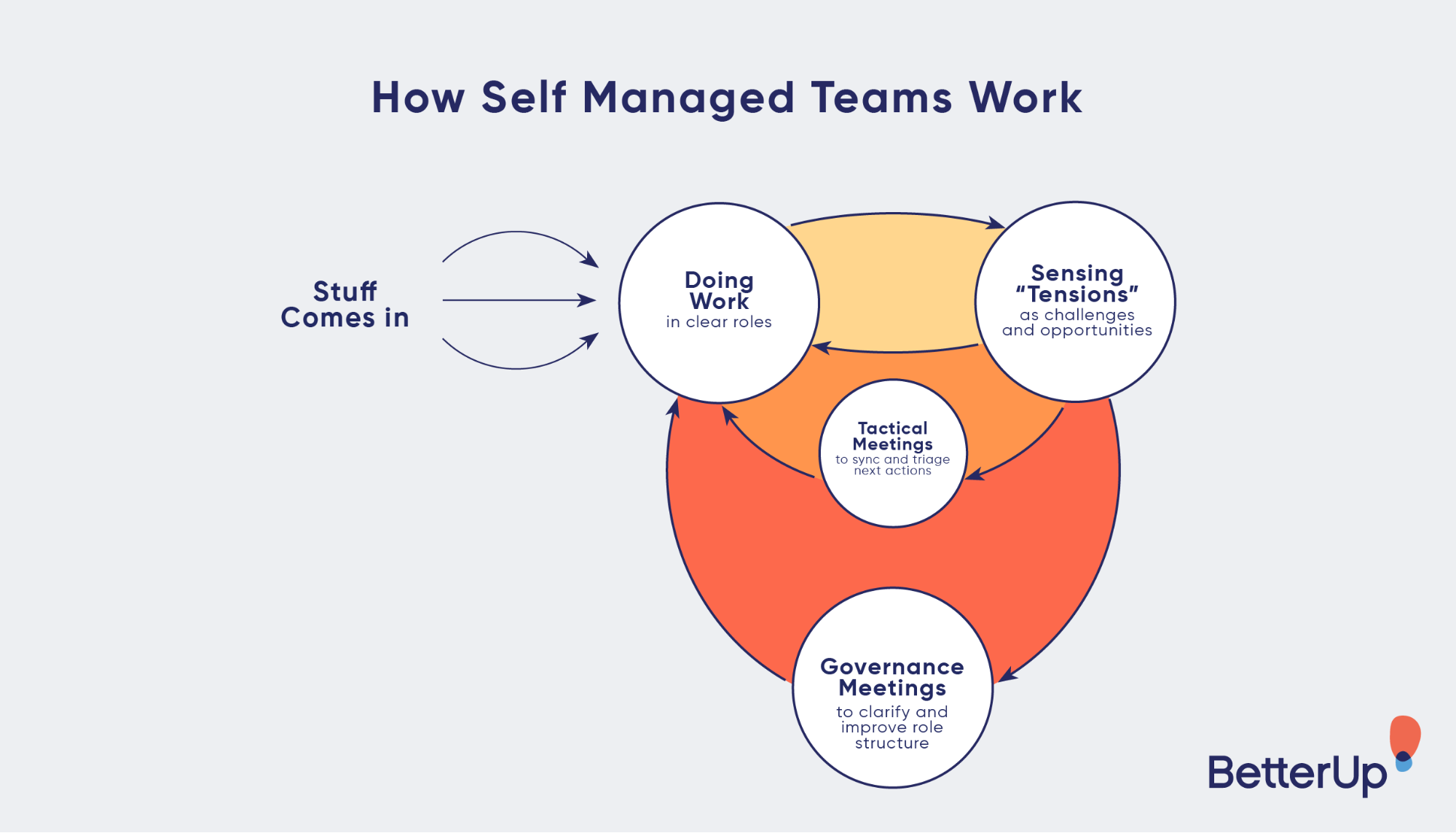 A self-managed team also has more discretion over decision-making within their process and how the entire team is managed. While this can pose some unique leadership challenges, it also offers leadership opportunities and skill development that may not be accessible for a traditional team.

Younger generations entering the workforce are more interested in developing expertise than in rising through the ranks, which 51% of managers see as an opportunity. Even among other generations, workers are becoming more aware of the need to stay relevant and gain new skills and experiences. Self-managed teams are a great way to expand employees’ experience and allow them to try out and master new capabilities through rotating roles and learning from other teammates.

Good self-managed teams demonstrate many of the benefits of having a great manager. These teams often develop more effective decision-making practices that combine considering more viewpoints, more natural collaboration and give-and-take, and moving toward action to remove obstacles and stay focused on the shared outcomes. 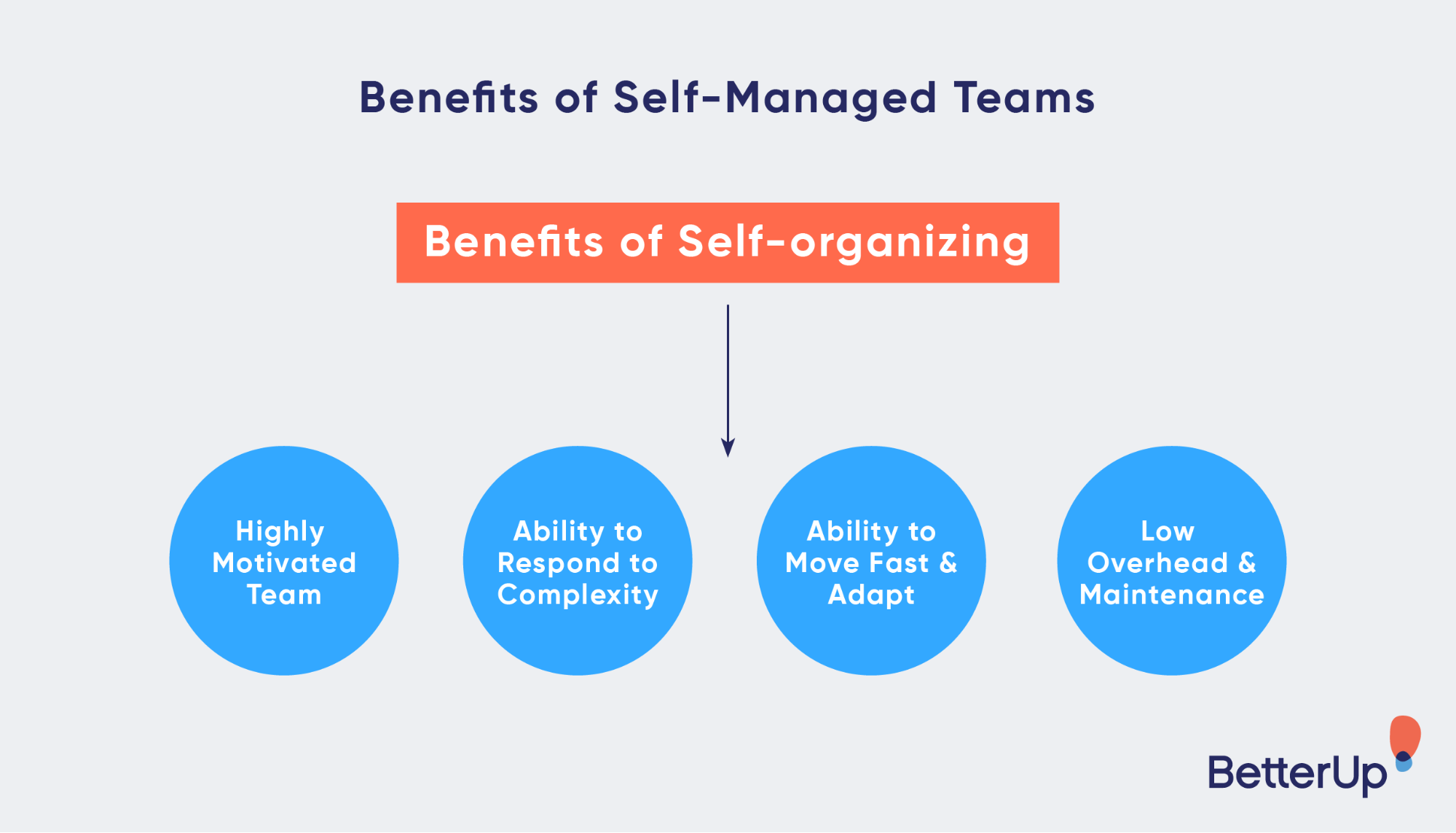 The close-knit, communal feel of autonomous teams can drive innovation and motivation, too. Each team member feels personally responsible for team performance, inspiring employees to do excellent work and share ideas for improvement more readily.

Fewer barriers in their work can lead to increased productivity, too. Since as far back as 2001, companies like RCAR Electronics have reported saving $10 million annually after implementing self-managed teams, showcasing the benefits that self-management can offer.

Self-managed teams often take a long time to set up and execute effectively. Certain employees may not be the right fit for self-management, and camaraderie, commitment, and competence are needed before seeing the benefits of a successful self-managed team.

Plus, without the proper training, self-managed teams can flounder and lose motivation.

Excessive meetings and a disconnect from overall business goals can also set a self-governing team off on the wrong track. Before developing autonomous teams, it’s crucial to give members the right training and guidance on their role in an organization.

When self-managed teams are implemented right, they’re known for being highly effective, innovative, and driven.

These teams collaborate on one central, common goal every day. They know the target, and they’re driven to support their team and do their part. No one waits for a manager or another team member to tell them what to do.

They trust each other

Self-managed teams are all-for-one and one-for-all. These teams innovate well because they are comfortable with each other and share their ideas freely. They know their team is dedicated to doing the best work possible together.

67% of employees say they would go above and beyond if they felt valued and engaged. These team members embody employee engagement and often excel for the benefit of the team.

Employee-driven decisions are the norm

Leadership is a must for self-managed teams, but no one person takes on the leader role. Instead, everyone contributes to decisions. These teams know their process best, and the organization trusts them to make informed decisions within reason.

They have high self-awareness

Self-managed team members are always looking for ways to improve their performance and the overall process. These teams know that without their effort, a service or product doesn’t get completed.

They have strong communication

63% of employees have wanted to quit because poor communication got in the way of their jobs.

Being on a team that values and prioritizes open communication helps self-organizing teams thrive. These teams readily contribute their opinions and unique experiences to drive the team forward.

Not every team is ready to be self-managed. But, if you already have team members going above and beyond their specialties, a self-managed team may be a good option. 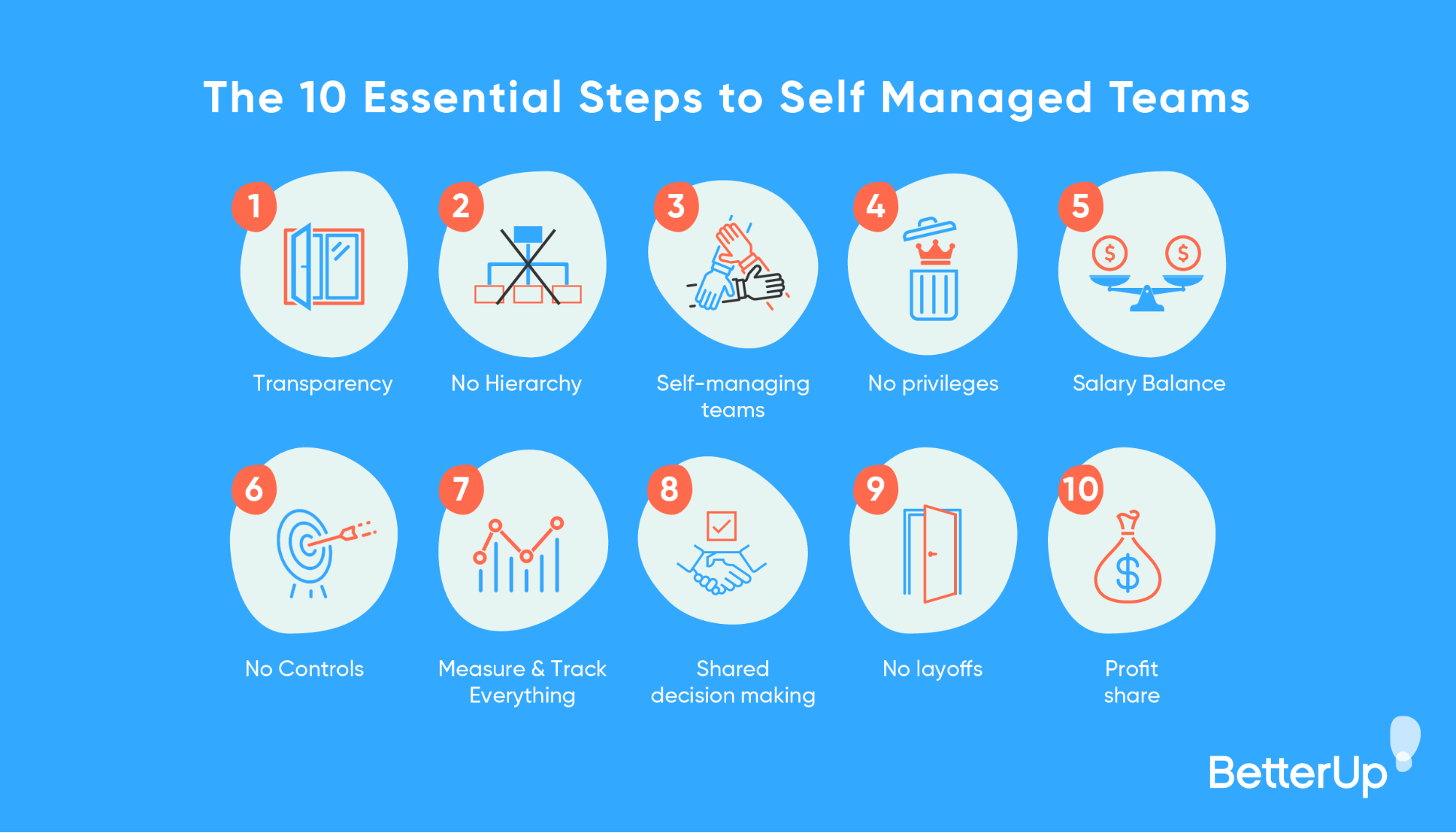 Jumping into self-managed teams can be challenging, and you risk losing your team’s best people if the experiment falls flat. Without the proper training and structure, adapting to a self-managed team is often a more significant undertaking than many organizations realize.

Here are some innovative steps that you can take to ease into self-managed teams.

Identify employees that could be a good fit for a self-managed team and see if they are interested in participating.

Self-management should mean rudderless. These teams do best when they understand the organization’s larger goals and values and cann check-in to stay aligned to them. Leadership can be clear about the boundaries for teams and help them define what outcomes will matter most.

Clarify why a self-managed team is best for a service or process, then define your new team’s guiding principles and goals.

A self-managed team needs base guidelines to thrive. Defining who does what and how decisions are made can set your team on the path to success.

Provide training on how self-managed teams work and how the process will adapt to the new team style.

Practice on a project with a volunteer team

Before diving in, set up your employees to walk through a particular process together for practice, slowly adding self-management features. Then, get ongoing feedback on how the team can run more smoothly.

Shifting to self-managed teams isn’t easy. But, with time and commitment, you can create a strong, productive team that offers unique benefits for your company.

If you’re ready to adopt self-managing teams, we have you covered. At BetterUp, we offer the coaching your employees need to thrive in any type of team. Sign up today to help your employees meet their full potential.

It’s an exciting, changing world of work — from how we design our workplaces to how we structure our teams. Agile performance remains key to innovation and growth. Read More
Leadership & Management
7 min read | September 2, 2019

Managers have a strong effect on team performance, for better or worse

Thriving managers improve team performance. But what about managers who are struggling? How team outcomes are impacted when leadership is lacking. Read More
Professional Development
19 min read | September 7, 2022

These 7 management skills are key to keeping teams on track. Use this guide to develop yours, and those of your upcoming leaders. Read More
Employee Experience
16 min read | February 17, 2022

Reactive vs. proactive management styles: Which one gets results?

Being a manager isn’t always putting out fires, but it can feel that way. Learn about reactive and proactive mindsets and find ways to apply them at work. Read More
Well-being
10 min read | June 1, 2022

Self-management is a critical workplace skill that can—and should—be developed. Learn what it is, and how to improve your own self-management skills. Read More
Employee Experience
7 min read | February 3, 2022

Feeling connected to the team is a top factor for job satisfaction, but the data shows a discrepancy between managers and ICs when it comes to belonging Read More