[Virtual Event] Are you preparing your workforce to be change-ready?

Sara Blakely on how mindset shapes, lifts, and empowers 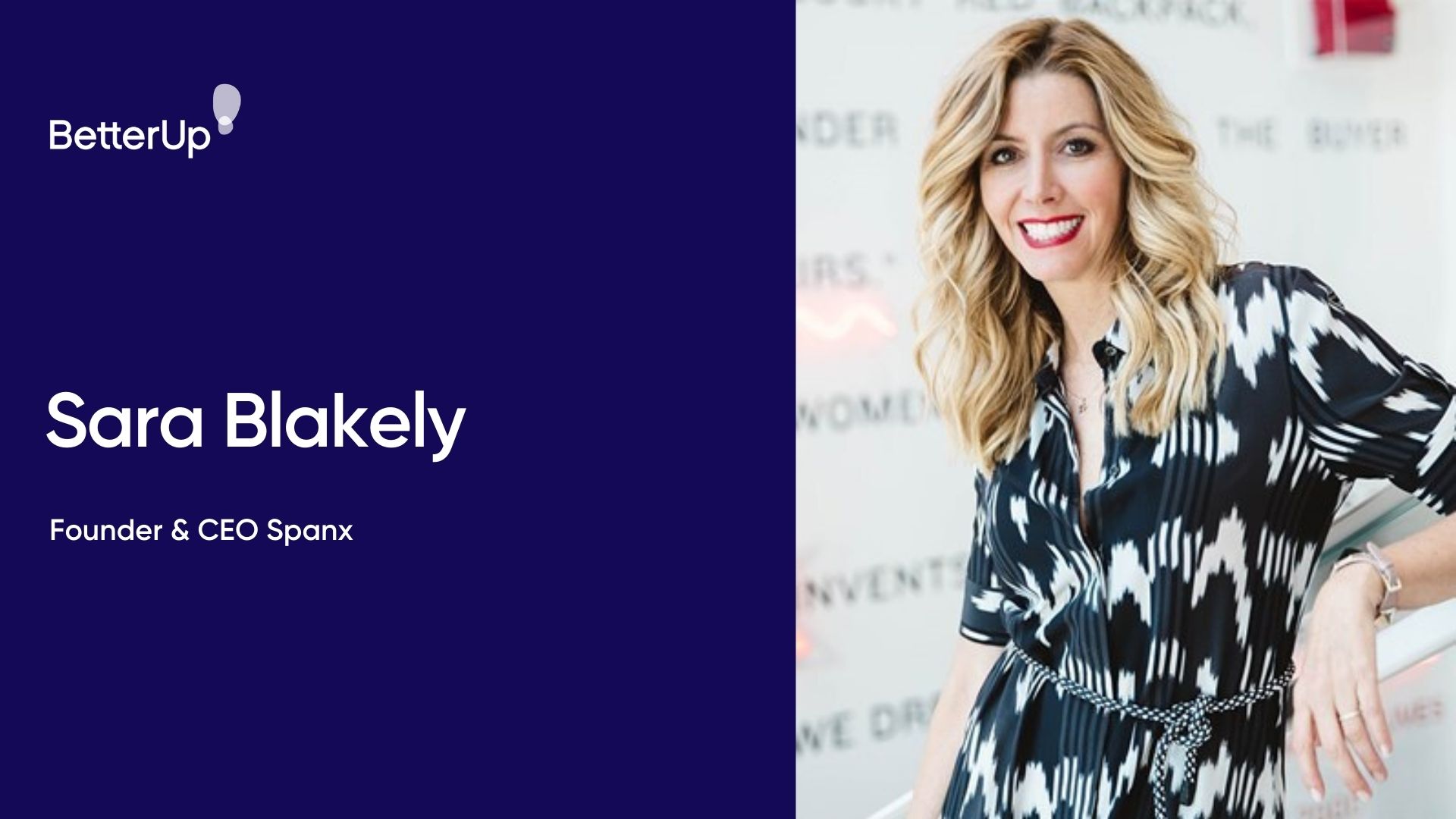 Sara Blakely, founder and CEO of Spanx, is no stranger to the power of mindset for personal growth and professional success — and she certainly knows a bit about holding it all together. Last week, she stopped by our BetterUp team-wide meeting to help us celebrate our one million coaching sessions milestone and shared how mindset was foundational to her success.

Intention shapes how we see the world

The Spanx story is almost an inventor’s urban legend — as the soundbite goes, Sara cut the feet out of her pantyhose to solve a common and frustrating issue, and Spanx existed (emerging fully formed like Athena...in shapewear). But, years before she had the idea that would revolutionize the intimates industry, Blakely had set an intention. Knowing that she wanted to be an entrepreneur, she was on the lookout for that “thing” — the great idea that would not only “change the script of my life but provide something meaningful to customers and the world.”

As the saying goes, we write our purposes in pen, but our paths in pencil. Even though she wasn't an “expert” in the fashion industry, Blakely leaned into her desire to make something that would truly make a difference in people’s lives. Standing up to experts when you’re new to the game takes a special kind of confidence, and an understanding that being a beginner can be your biggest competitive advantage.

A beginner’s mindset helps you see what others don’t

Blakely’s “beginner mindset” was cultivated as a young woman. During one of the most difficult and emotionally turbulent times in her life, her father handed her a series of cassette tapes, saying “I wish I was your age when I discovered this.” The tapes — a recording of How to Be a No-Limit Person by Dr. Wayne Dyer — gave Blakely an anchor and a path forward during a time of immense loss. She realized for the first time that she could control not just what she did, but how she thought.

Blakely jokes, “No one wanted to get stuck in my car after a party,” since she listened to tapes on mindset, personal growth, and leadership constantly. But she felt like learning to control how you thought was powerful, and something that everyone she knew needed to hear. Fifteen years later, when Blakely was featured on the cover of Forbes, her friends from high school reached out, lamenting, “I guess we should have listened to those tapes.”

To develop a beginner’s mindset, Blakely suggests this mental exercise. Ask yourself, “If nobody showed you how to do your job, how would you be doing it? Chances are, what comes up is a better way, faster process, smarter way — a whole new way of approaching something.”

A growth mindset asks: “What did I fail at this week?”

Blakely embraces an attitude of creativity and curiosity when it comes to her life — another trait that’s rooted in her adolescence. “My dad would say, ‘So what did you guys fail at this week?’” The ritual of encouraging Sara and her brother to try — to always be willing to experience something new — recontextualized failure for her.

Trying, and failing, were just part of growing. And growth, not success or perfection, was the goal worth celebrating.

Blakely says, “It didn't become about the outcome. It became about not trying. So now throughout my life, when I look myself in the mirror, my failures are when I was scared and didn't try.” She incorporates this value into the culture at Spanx with what they affectionately term “Oops!” meetings. At these company-wide meetings, team members are encouraged to share and celebrate their mistakes — led by Blakely herself.

And lets you lean into embarrassment

What’s so important about normalizing — and even celebrating — failure? People are afraid to fail. They’re afraid of what it may mean about them, what others will think of them, and of being embarrassed.

Blakely began asking herself, “What does being embarrassed really mean? And how do I free myself up from that fear?” By asking, she realized that the fear of failure has more to do with mindset and being concerned about what others think of you — and that’s the thing to worry about, not failure itself.

By celebrating and being open about her failures, she realized something crucial. “Your failures,” Blakely asserts, “are your greatest asset to connect with another human being.” Many people fall into the trap of thinking that they have to be perfect to be successful. However, you don’t inspire others with perfection. Your vulnerability makes you relatable — which makes you inspiring. You can’t lead others if you can’t relate to them.

“Your failures are your greatest asset to connect with another human being.”

Humor and playfulness spark and support

If you’re familiar with Spanx, you know that humor is part and parcel of their brand. Blakely remembers, “When I started Spanx, I felt like all these companies were talking at me and not to me. And I want to speak to them the way that I would speak to friends over a drink.”

The fact is, humor isn’t just essential to building a beginner’s mindset, but for connecting to others as well. Playfulness at work (as well as in other areas of life) paves the way for creativity, authenticity, and innovation — which are, unsurprisingly, three values that Spanx has come to be known for. Sara says, “You don't have to act serious to be taken seriously. You can be credible, and be absolutely silly and hilarious.”

Welcoming fun into work has other benefits, too. It’s not just about being silly all the time. It’s about staying open, engaged, and willing to play intellectually. Humor and playfulness at work reduce stress, foster a sense of belonging, and improve mental fitness — among many other benefits.

Confidence and trust push the envelope

So what happens when you combine intention with a beginner’s mindset, the willingness to try — and fail — and a spirit of play? Innovation. Like Spanx’s unique story (and CEO), companies that are willing to experiment and play ultimately thrive. They develop agile leaders who can navigate changing markets and see possibilities where others see threats. It isn’t that they’re unafraid, but that they choose to focus on what could go right instead.

What does that look like in real life? In reality, this combination of mindsets isn’t something you’re drawing on just when you’re coming up with a great new idea. It’s what you draw on every time you go against the grain in a meeting or speak up despite not being the expert.

Putting a finer point on the importance of mindset for innovation, Sara says, “If you're not constantly working on your mindset, you'll never be brave enough or confident enough to stand in a room full of experts and break new ground.” No matter the industry, all innovation first requires someone to get off autopilot, get uncomfortable, and go against the way the experts say something must be done.

How do you continue to grow and move forward even when you mess up? The answer is self-trust. Blakely shares, “We all have this intuition inside of us and it's coming from a source, it's coming from the universe, it's coming from God — whatever you believe in. And the stronger you get, by being quiet and listening to it and honoring it, the louder it will get. It's like the old-fashioned radios, you know — you tune in and as you turn the dial ... it's fuzzy, and then all of a sudden, it's clear as anything.”

That intuition is honed by trying, and failing, and trying again. The more you dust yourself off, the more chances you take, the more you learn to trust your instincts. Surviving failure — and really, the embarrassment of failure — reminds us that we’re stronger and more resilient than we think.

Ultimately, our failures aren’t the end of our stories. For Blakely, the outcomes of our failures are what lead us to different things — whether it’s our new best friend or our next great idea. Keeping the intention and the fun as you stumble ahead, re-evaluate, and move forward again is how you grow — and, just maybe, how you change the world.

BetterUp's People Analytics Dashboard goes beyond usage and satisfaction metrics to help you to track the actual growth of your people in critical mindsets, behaviors, and... Read More
Well-being
15 min read | November 18, 2021

What is a fixed mindset, and how does a growth mindset compare? Here’s everything you should know about the differences between a fixed and growth mindset. Read More
Leadership & Management
12 min read | November 8, 2021

Global sales leader Brad McCracken on the mindsets and behaviors sales leaders need to help their teams succeed at every stage and why coaching makes a difference. Read More
Productivity
11 min read | January 14, 2022

More than money: When it comes to goals, can thinking like a millionaire help?

Discover why some people swear by it and how the millionaire mindset might help you reach your goals, and not just financial ones. Read More
Coaching
9 min read | June 13, 2022

How to develop a resilient mindset: Recovering from setbacks

Looking to develop a resilient mindset? Learn key tips on how to strengthen your resilience. Plus, discover how to let go of things you can’t control. Read More