If you’ve ever needed support from your People team, you know how critical they can be for hitting your team goals. When Justin — an HR Program Manager supporting business operations — had the opportunity to connect with a BetterUp coach, he (after a slight pause) seized the moment! 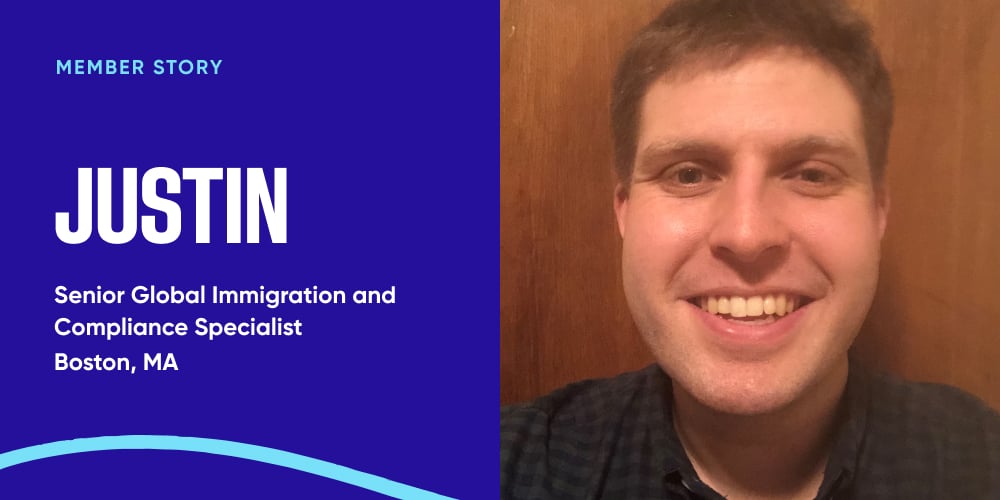 Read on to see how Justin partnered with his BetterUp Coach to shape his days, unearth goals, and think about the road ahead to chart his course for the future.

As a top performer in Josh Bersin Academy, Justin was awarded a BetterUp license to work with a Coach. His reaction? “Only executives need coaches.” Luckily, after thinking a moment, Justin remembered hearing that everyone can benefit from working with a good Coach. He set up his profile and got started.

Tactical to strategic — making the transition

“At first I didn’t know what I wanted to work on. My days were always full, sometimes overwhelming, and I wanted to be in control of how I was spending my time…. I never had time to pick my head up and look at the long-term road ahead.”

Justin was in the midst of transitioning from an executional role to a strategic one — the timing for coaching felt ideal. As he began working with his coach, Justin realized that one goal he wanted for his time was to be less reactive. He wanted to focus on impactful work, rather than a never-ending task list.

Identifying the patterns to navigate his path

With a packed schedule of meetings, Justin had difficulty getting to the meaningful work. With his Coach, Justin identified patterns in his daily routine that would help him gain control over his calendar and to-do list. He worked on breaking down the core work that needed to be completed each week, and addressing “filler” projects when he had extra time. The result? He became more strategic. He also made a practice of checking in with himself throughout the day. He’d ask himself, “how can I structure my day in a way that’s going to serve me?” His Coach gave him a 3-question framework to ensure that he was focusing on the high-impact work, rather than getting lost in minutiae.

With these “small” tweaks, Justin felt more energized, organized, and eager to look ahead and plan further into the future. “As my coaching continued, I was able to create structure in my day to day that, candidly, started to slip during the pandemic.” Justin found himself being more intentional about his calendar, planning, and the projects he took on. He also realized that some of the “nice to have” routines he’d been prompted to by his coach had become integral to his day-to-day.

Setting goals for the immediate- and longer-term

Justin and his coach connected weekly on ongoing topics. But some weeks were focused on the immediate, like presenting at the upcoming meeting or a difficult discussion. A key takeaway he discovered? “By talking with someone and sharing my short and long-term goals out loud, it allowed me to bring goals to the surface that I didn’t necessarily know were inside of me.

“Once we had set a long-term vision, we backtracked into things that I could do in the day-to-day to help me make incremental progress toward those goals.” With coaching, Justin was able to put his many cards on the table, create a view of the future, and get personalized guidance to figure out which step to take next.

By talking with someone and sharing my short and long-term goals out loud, it allowed me to bring goals to the surface that I didn’t necessarily know were inside of me.

“I had never even thought of the term ‘personal power’ before having a Coach. Yet when we got here it felt very organic.” Justin’s coach encouraged him to connect with his community outside of work in order to get in touch with his values and share his goals and plans with a core group of friends. “This was hard, but I learned that by sharing with others, you really make the goal and intention come to life — it kept me accountable.”

“Truth be told, I walked out of my months of coaching in a very different place. These answers were within me the whole time, I just needed someone to help me excavate them. Giving it language makes it more real."

Coach as mirror and mentor — checking in and finding insight

Working with a Coach can feel different session to session. Justin’s Coach always made the session productive, but she let him lead. “She would begin with: ‘What do you want to work on today?’ And she always knew what questions to ask to surface things I didn’t realize were there.”

With his Coach, Justin would reflect on the week, personal and professional. “My favorite thing about working with Jane was that she acted as my co-pilot. I was in the driver’s seat, but she would point out signs and speed bumps along the way that signaled a theme that we could dig into together. She might pause and say, ‘I noticed that you used X word. Is there a reason for this?’”

”With Jane to help me see myself, I could identify patterns and unpack habits I had unknowingly developed. I’m so grateful to have worked with my Coach. So many of our sessions ended in a breakthrough!”

Organizational coaching: Everything you wanted to know but were afraid to ask

Organizational coaching targets systemic change within a company. Learn how it works, why it’s so important, and how to choose the best program. Read More
Coaching
8 min read | July 14, 2021

What I didn't know before working with a coach: The power of reflection

Coaches help us learn to see ourselves. Reflection is a powerful tool for self-awareness and growth, leading to professional success and life satisfaction. Read More
Coaching
14 min read | June 7, 2022

Does career coaching really pay for itself? A guide to costs and value

Career coaching costs vary, but generally range from $50 to $250 per session. Learn what to look for and how to get the most out of your investment. Read More
Culture
6 min read | September 2, 2019

Introducing BetterUp, and why everyone needs a coach in their corner

Work is no longer “just a job.” We’re investing more of ourselves into our work than ever before, and we’re sacrificing a lot in exchange along the way. Read More
Coaching
14 min read | June 3, 2022

5 coaching frameworks to develop your team

Designing a development plan around a coaching model helps structure your roadmap. Use this guide to determine which framework works best for your team. Read More
Professional Development
11 min read | September 2, 2019

What Happened When A Surgeon Hired A Coach

When surgeon Atul Gawande hit five years at his practice, his complication rates — which had been steadily dropping below the national averages every year — began to stall.... Read More
Coaching
11 min read | November 12, 2021

Benefits of coaching: Purpose, clarity, and passion in daily life

There are lots of products and services out there claiming to change your life — but the benefits of coaching might actually deliver on this promise. Read More
Coaching
17 min read | September 20, 2021

Virtual coaching: the benefits of coaching without constraints

Zoomed out? Here’s one reason to keep your camera on. Learn what to expect in a virtual coaching conversation and how to choose the best program. Read More
Coaching
9 min read | June 13, 2022

Learn how BetterUp coaching helped leaders across the UK develop the key mindsets and behaviours for peak performance. Read More