What Happened When A Surgeon Hired A Coach 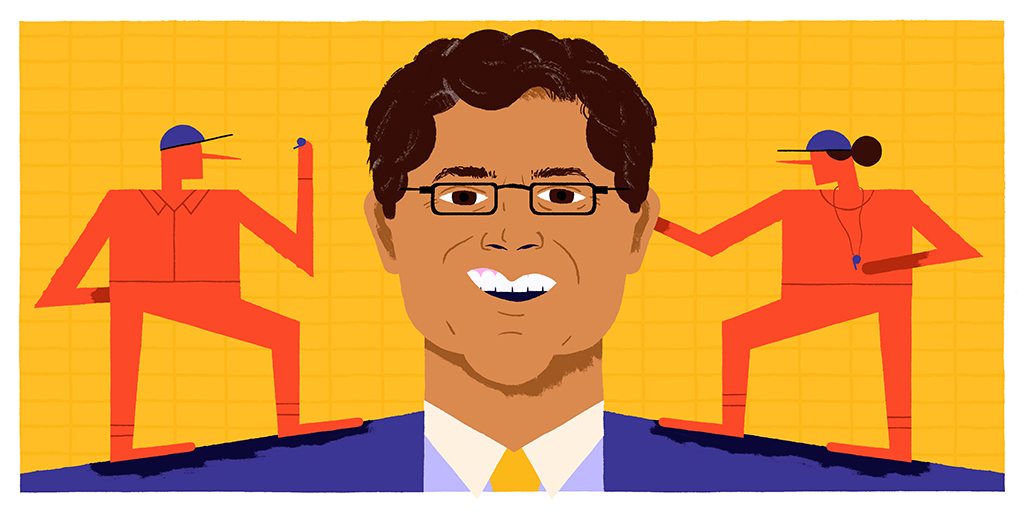 The traditional view: Experts improve themselves

The coaching view: All experts have blind spots

Which is right: Traditional pedagogy or coaching?

Coaching for all professions

When surgeon Atul Gawande hit five years at his practice, his complication rates — which had been steadily dropping below the national averages every year — began to stall. And a few years after that, his improvements seemed to stop altogether.

He thought, “Is this as good as I’m going to get?” Or could he do something about his professional plateau?

In his search to understand how professionals get better at what they do, Gawande stumbled upon a key insight: when experts can’t see their performance accurately, they miss critical opportunities to improve. Gawande explores the antidote to this issue in his recent talk at TED2017, explaining why even the best-trained professionals need coaching.

The traditional view: Experts improve themselves

There are two views of how professionals can improve their skills.

The first is the traditional pedagogical view. It holds that students should learn from schools and teachers before graduating and entering the “real world,” then make their way on their own. The key idea is that in reaching a certain level of expertise, they no longer require instruction and can improve their skills independently.

Lawyers and doctors typically follow this route. After graduating from rigorous education programs, they must continue to develop their abilities and stay on top of the latest landmark cases or research. As Gawande writes in The New Yorker, “Expertise is thought to be not a static condition but one that doctors must build and sustain for themselves.”

Trained musicians are another example; consider renowned violinist Itzhak Perlman, who studied at Juilliard under legendary instructor Dorothy DeLay. DeLay trained her students to not just play the violin, but to think and learn in ways that would transfer to other contexts — she wanted to help them help themselves once they left her tutelage.

This pedagogical model is widespread, but there is another model: coaching, and it applies to virtually every professional and creative pursuit.

The coaching view: All experts have blind spots

According to this view, everyone needs a coach, even the greatest performers in the world.

This is undisputed in professional sports, which, according to Gawande, “considers the teaching model naïve about our human capacity for self-perfection. It holds that, no matter how well prepared people are in their formative years, few can achieve and maintain their best performance on their own.”

When Yale hired a coach, Harvard didn’t, and they lost to Yale over and over again, beating them only four times over the course of the next three decades.

He gives an example of early coaching in professional sports. Harvard and Yale have been fierce American football rivals since 1875. When Yale hired a coach, Harvard didn’t, and they lost to Yale over and over again, beating them only four times over the course of the next three decades. Hiring a coach became the new standard in American sports.

Despite coaching’s ubiquity in some professions, it’s rare in others. Think of surgery: it seemed absurd to Gawande to pay someone to give him advice in his operating room. On the other hand, it occurred to him that in eight years of his surgical practice, no senior colleague had ever come to observe him.

Which is right: Traditional pedagogy or coaching?

Coaching and traditional pedagogy seem to be in direct conflict because they’re based on two opposing ideas: the latter suggests that experts can improve themselves (which is one of the things that makes them an expert), while the former says that no expert can truly improve on their own.

In his hunt to figure out which model was right, Gawande spoke to Itzhak Perlman himself. He asked Perlman why more violinists don’t have coaches. Perlman replied that he was lucky: he actually did have a coach all along.

His wife, Toby Perlman, also a Juilliard-trained violinist, was his dedicated coach for decades. She would listen in the audience and give him notes on where his performance could be improved.

“The great challenge in performing is listening to yourself,” said Perlman. “Your physicality, the sensation that you have as you play the violin, interferes with your accuracy of listening.” Toby Perlman heard what Itzhak didn’t. She became his “outside eyes and ears.” Perlman also pointed out that vocalists typically have voice coaches.

A coach can point out issues you don’t know exist, including small details that nevertheless add up.

A coach can point out issues you don’t know exist, including small details that nevertheless add up. A brilliant example of this? UCLA basketball coach John Wooden notoriously instructed his players how to put on socks snugly.

“Details create success,” was his mantra. Wrinkled socks cause blisters.

Coaching for all professions

What if you’re not a football player or Julliard-trained musician, but a professional who wants to perform well at your job, regardless of your leadership position?

Gawande decided to test coaching in his surgery practice to overcome his performance plateau. He invited his old professor to observe an operation that Gawande thought went well. What resulted was transformative.

“That one twenty-minute discussion gave me more to consider and work on than I’d had in the past five years,” says Gawande.

The professor’s notes addressed the little things: where Gawande’s elbows were positioned, for example, or where the light was. The “outside eyes and ears” perceived a more accurate picture of the reality in the operating room; only a coach could break down the most basic skills and help Gawande build them back up again.

After just two months of coaching, Gawande felt himself advance, and after a year of coaching, his complication rates began to improve again.

His experience with coaching was so profound, he decided to to see if it could be extended to other professionals. In his work with his health-systems innovation center, Ariadne Labs, he aimed to improve the neonatal mortality rate of birthing centers in India by focusing on the activities of the healthcare staff.

Ariadne Labs has worked with the World Health Organization to create a safe-birth checklist, but this follows the traditional pedagogical model of teaching and learning. Gawande knew that checklists alone wouldn’t realize the birth attendants’ potential, so he brought in coaches.

In partnership with the Indian government, his organization undertook a trial across 120 birth centers in Uttar Pradesh. Half the healthcare professionals received no coaching, while the other half received four months of coaching from trained doctors and nurses; this coaching tapered off after eight months.

The coaches worked on checklist implementation but also addressed problems that the checklist couldn’t, like in-the-moment communication skills. They provided coaching to 400 nurses and 100 physicians, and tracked over 160,000 births.

The results were remarkable. The control group delivered on just one-third of eighty basic practices, and showed no improvement over time. But the experimental group showed clear growth, and delivered on two-thirds of the practices by the end of the study.

The team was transformed, and they saved lives. Gawande immediately saw the possibilities for coaching to support and accelerate life-long learning in all fields.

Research supports the idea that coaching helps all professions. Take schoolteachers, for example. Researchers from Harvard and Brown Universities analyzed forty-four studies on teacher coaching, and their findings affirmed the idea that coaching is an effective development tool, compared to traditional teaching methods. Earlier research shows the same, as Gawande points out:

“California researchers in the early nineteen-eighties conducted a five-year study of teacher-skill development in eighty schools, and noticed something interesting.

Workshops led teachers to use new skills in the classroom only ten percent of the time. Even when a practice session with demonstrations and personal feedback was added, fewer than twenty percent made the change.

But when coaching was introduced—when a colleague watched them try the new skills in their own classroom and provided suggestions—adoption rates passed ninety per cent.

A spate of small randomized trials confirmed the effect. Coached teachers were more effective, and their students did better on tests.”

Coaching is valuable in other modern workforces. For sales professionals in particular, coaching is a high-impact investment compared to traditional training, according to the Harvard Business Review. And research by IBM’s Millennial Corps found that coaching is one of the three most important factors in improving millennials’ experience at their company.

Gawande sees coaching as a massive enabling force. It transforms professionals, whether they’re already the best in the world or individuals who want to be better at their jobs. When we know how to take all performers from good to great, anything’s possible.

What we deem to be “the future” of work is constantly shifting, for obvious reasons. But if the last few years are any indication, work is becoming more than a job for many... Read More
Professional Development
3 min read | September 2, 2019

Why We Need to Reframe Potential into Readiness

For years, we’ve been investing in employees who show “potential.” We separate out those who show potential from those who don’t, and then route hundreds of thousands — if... Read More
Professional Development
11 min read | September 2, 2019

Positive psychology lessons from an Olympic medalist and Navy SEAL

Learn how this BetterUp member worked with his Coach to shape his days, unearth goals, and think about the road ahead to chart his course for the future. Read More
Coaching
8 min read | July 14, 2021

What I didn't know before working with a coach: The power of reflection

Coaches help us learn to see ourselves. Reflection is a powerful tool for self-awareness and growth, leading to professional success and life satisfaction. Read More
Employee Experience
14 min read | November 11, 2022

Tips to develop a remote training program to upskill your team

Discover what effective remote training looks like and why it has become increasingly important to our professional development in the past few years. Read More
Professional Development
14 min read | September 2, 2022

Why are you leaving your current job? There are plenty of good reasons; here are the best ones to mention in an interview. Read More
Professional Development
14 min read | October 18, 2022

Not seeing a promotion? Is it a problem? Here’s what to do

Don’t get stuck in a rut. If you’ve received no promotion after five years, it’s time to rethink your strategy. Here’s what to do. Read More