BetterUp launches the Center for Purpose and Performance with Adam Grant 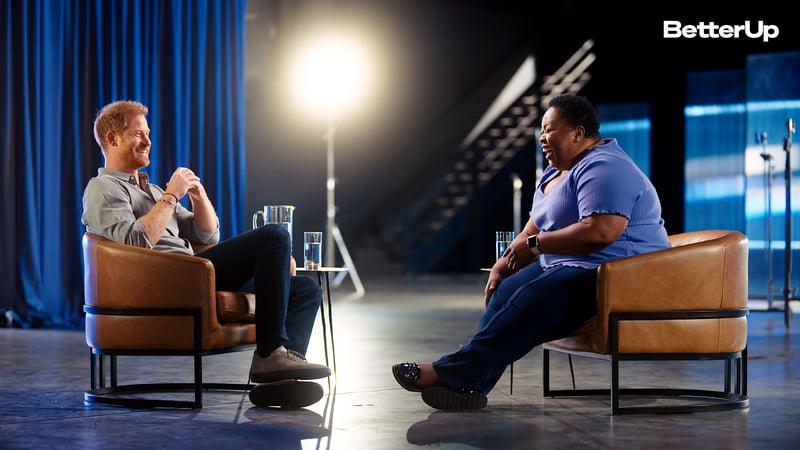 Today BetterUp®, the human transformation company, debuted “Transform With Mental Fitness”, a short film hosted by the company’s Chief Impact Officer, Prince Harry, The Duke of Sussex, where he sits down with three inspirational guests – professional snowboarder and record-setting gold medalist Chloe Kim, renowned author, organizational psychologist and BetterUp Science Board member, Adam Grant, and BetterUp Member Blu Mendoza. The conversation dives into the topic of mental fitness and how it relates to performance, in an effort to drive advocacy for and awareness of the benefits of proactive mental health.

The five-minute video introduces mental fitness as a proactive approach and practice that ignites wellbeing, performance, and growth. Through introspective conversations, the film highlights shared experiences, philosophies, and positive habits that all people can leverage to create and sustain a mental fitness practice. It aims to reframe the conversation around mental health from one focused on fixing the mind to proactively flexing the mind, like a muscle. It also highlights that by leaning on a support system through coaching and human connection, people can achieve true transformation.

"Almost every day, I hear from people who have realized that when we proactively care for our mental health, as we do our physical health, we can equip ourselves with incredible tools and resources to unlock our full potential and take on new challenges,” said BetterUp’s Chief Impact Officer Prince Harry, The Duke of Sussex. “This is all about normalizing training and healthy practices for our minds.”

BetterUp works with some of the world’s largest companies to drive business outcomes by fostering the personal and professional growth of their workforces. From building resilience and belonging in employees, to improving retention and productivity across teams, BetterUp offers transformational experiences through 1:1 and group coaching, along with an extended network of services spanning DE&I, nutrition, sleep, parenting, and public speaking, among others.

With an in-house team of PhDs and behavioral scientists who design and study the impact of personal growth and professional development, BetterUp combines the industry’s most innovative blend of behavioral science, AI technology, and human connection, so both people and organizations can thrive.

The video, which features music from The xx, was produced in partnership with RadicalMedia, a fully integrated global media and communications company that produces content for film, television, and digital platforms. RadicalMedia has been honored with two Academy Award wins for Summer of Soul on Hulu & Disney+ and The Fog of War, Emmy Award wins for Hamilton and David Byrne’s American Utopia as well as Grammy Awards, Golden Globe, Sundance Grand Jury Prize and more. The company also produced The Me You Can’t See on Apple TV+, a docuseries co-created by Oprah Winfrey and Prince Harry that explores mental health and emotional well-being with stories from people around the world.

The public can visit BetterUp.com/mental-fitness to learn more about starting a mental fitness practice and see more content from the full conversations about the transformational journeys of the guests. The full conversation between Blu Mendoza and Prince Harry, The Duke of Sussex will be available to BetterUp members through the BetterUp app on Tuesday, July 19.

As an organizational psychologist, Adam Grant rethinks how people lead, work and live. He has been Wharton’s top-rated professor for seven straight years, and his pioneering research has inspired people to question assumptions about motivation, generosity and creativity. He is the #1 New York Times bestselling author of five books that have sold millions of copies, most recently Think Again: The Power of Knowing What You Don’t Know. His TED talks have more than 30 million views, his podcast WorkLife has topped the charts, and his viral op-ed on languishing was the most-saved article of 2021. He has been recognized as one of the world’s 10 most influential management thinkers and one of Fortune’s 40 Under 40, and has received scientific achievement awards from the American Psychological Association and the National Science Foundation. Adam received his BA from Harvard University and his PhD from the University of Michigan, and he is a former magician and junior Olympic springboard diver.

The 2022 Winter Olympics cemented Chloe Kim as the female face of both snowboarding and action sports. Chloe became the first female in history to win back-to-back Olympic Gold Medals in halfpipe snowboarding. After being accepted to Princeton University, Chloe took the 2019-20 season off from competing to focus on her education. Returning in January 2021 after a 20-month hiatus from snowboarding competition, Chloe continued her dominance of the sport, winning all four women’s superpipe events in the 2020- 21 season including her sixth X Games gold medal and her second World Championship. Since the age of 13, Chloe has spent the past decade re-writing the women’s halfpipe snowboarding record books.Chloe has had just as much success off the mountain as she's had on it. She has been featured on Forbes 30 under 30 list, TIME’s 100 list, and TIME’s 30 Most Influential Teens list (three years in a row), as well as the cover of Time Magazine, Shape Magazine, SportsIllustrated, Sports Illustrated Kids, and ESPN Magazine. She also had an appearance in a Maroon 5 video and the Charlie’s Angels reboot. Additionally, Chloe has taken home four ESPY Awards, three Nickelodeon Kids Choice Sports Awards, two Laureus World Sports Awards, and finished as a semi-finalist on 2020’s season of the Masked Singer. Chloe has a passion for fashion and design, and will be launching her first collection with Roxy in Fall 2022, her third goggle with Oakley in Winter 2022, and even attended the 2022 Met Gala.

Member story: Navigating the gray to uncover my strengths and passion

Learn how this BetterUp member worked with his Coach to shape his days, unearth goals, and think about the road ahead to chart his course for the future. Read More
Research & Insights
6 min read | June 8, 2021

We looked at BetterUp Member data to better understand how one factor — feeling a sense of belonging — drives a person’s intent to stay with their employer. Read More
Coaching
6 min read | July 21, 2020

With the help of corporate donors, our coaches and community, we have provided free access to the BetterUp platform to thousands of healthcare workers and educators since... Read More
Professional Development
7 min read | June 3, 2021