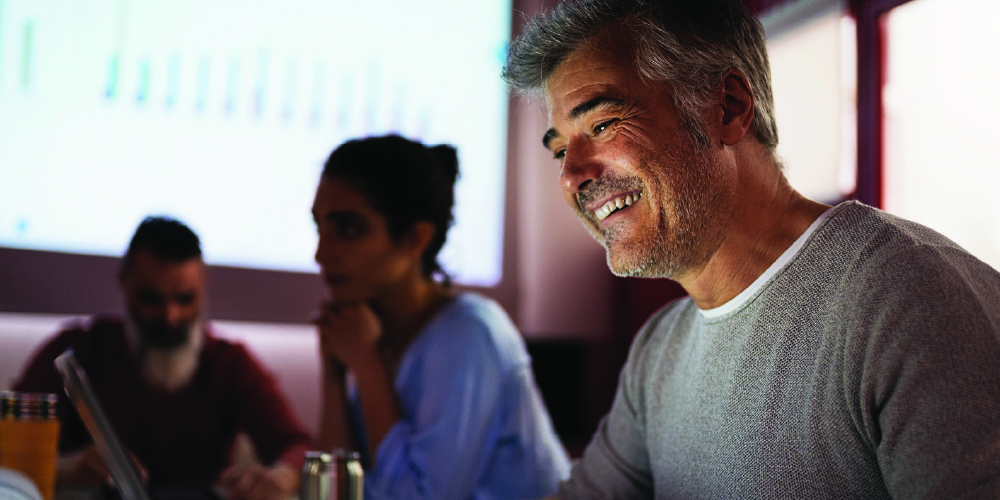 In a world where we succeed

I wrote down the thoughts below as sort of north star to help me stay grounded when huge highs and lows surely come: long days, unexpected twists, disappointments, and losses. And some big, badass, champagne-popping wins, too. I hope this also triggers ideas in you to better yourself and our team.

When someone throws you a touchdown, you catch it. When Antonio Banderas asks you to dance, you say, “yes.”

Our mission is fundamentally social. We want to advance the human condition using technology, science, and care, and to ultimately help people become their best selves. There are two words that capture this concept for me:  Love Work.

The majority of people in the world  ought to love their work. It’s where we spend a huge chunk of our time on earth, and it’s a major driver of good for others. Many of us are lucky to be living out our unique personal potential as human beings through our work—these are our contributions to the world.

The idea that we could help masses of people love work may not only sound crazy, but  extremely crazy. It requires a meaningful depth of change in each individual.

Can we do this at scale to reach the millions of people who would benefit from such a change? I think so.

In a world where we succeed

Many people don’t have a fair shot at loving work.

Companies will always be driven by profit motives — cutting wages and benefits as much as they can get away with. Global markets create ruthless competition, where anyone’s job can be outsourced to a lower cost country. To top it off, the rise of AI and machines will eventually take over even high-skilled roles including pilots, accountants, and even surgeons.

No one is safe from the chaos of work.

It takes a healthy dose of hope in humanity to believe that given all these forces, we could have a role in creating a story of progress that addresses the fundamental needs of people. The problem is not that these forces are making work fundamentally miserable and uncertain. It’s that  many people don’t have a fair shot at loving work.

A rational person might wonder, “But what if I can never have the sort of job that reflects my highest calling?” That’s a fair question, but I would argue that even in this case, more people should have the opportunity to develop the skills — craftsmanship, communication, relationship — that may ultimately lead them to love the work at hand.

Big structural barriers make it many times harder for certain groups to reach the same opportunities at fulfilling and rewarding work.

But while the resources may exist in pockets of access (universities, executive circles, the 1%), most people don’t know how to make sense of the myriad of confusing self-help, bad science, and advice columns. Perhaps more importantly, big structural barriers make it many times harder for certain groups to reach the same opportunities at fulfilling and rewarding work.

We’re here to do our part in changing the system to one that values the person over the job. Our unique opportunity for impact is that  we can help people directly and shape the institutions that set the game board for work. Individuals use our product in a very intimate way, trusting their coaches with their aspirations, worries, and desires. But we also have a chance to address the structures in which people work—mainly organizations that are in the position to dramatically reshape what modern work entails.

In one of my favorite books, the autobiography of Martin Luther King Jr., Dr. King writes to caution people who felt content once the civic rights movement had put on successful mass demonstrations in Birmingham. He wrote, “A social movement that only moves people is merely a revolt. A movement that changes both people and institutions is a revolution.”

As we become more deeply involved with organizations filled with high-performing and motivated individuals, we’ll collect data that can fundamentally transform the status quo of work. We’ll be able to share these learnings —many of which are yet to be unearthed — with the world.

I personally feel humbled to have the opportunity to be on this journey with you all as we bring this important and multi-dimensional mission to life. Were we to succeed, the impact of our work will be meaningful from several points of view:

As we stand on the shoulders of those who have laid the foundations for us, I believe that others will be inspired to continue the work that we’ve started.

How can each of us love work?

I bring this to you in the form of a personal challenge since only you have the power to make this happen for yourself. Our collective experience with clients shows that our individual passion for work is not only personally fulfilling, but actually helps our team be successful in an always-on, high pressure environment. There also seems to be  plenty of research to back this up, too. As our journey ahead gets harder and more complex, it seems like a good time to pause to gain a solid sense for how we design our work to be fulfilling, exhilarating, and fun.

Each of us already has a strong meaning associated with our work at BetterUp. Something sparked you to see the possibility in what we could become rather than what we were. More likely, it was an interaction with someone or some event that felt authentic. Maybe it’s even a hint of what some may experience as a vocation, when you’re called to drop everything else you were told you should be doing, to do what you were really meant to do.

The question that I’d like to explore is how to live out our meaning when we get bogged down in the daily grind: emails, sprint planning, and meetings. Though I would bet almost anything that your BetterUp coach is better than I am at helping figure out how to bring it to life, I wanted to offer some possible directions that may help us collectively tap into our personal “6th gear.”

I don’t believe we are in a high-stakes performance. It’s about practice and mastery. The truth is, outsiders won’t care if we fail. So what’s there to lose? Without a playful attitude, it would be ludicrous to think that our  team would beat the odds to build a world-changing, enduring organization. With this mindset, tasks like gathering feedback, trying new methods of work, and discovering new problems begin to take on a new meaning: from uncomfortable pieces of our jobs to essential elements of doing our best work.

The solution to overwhelming activity tends to be focus. While I think that’s commonly true, what happens when it feels like you are working ‘smart’ and it’s still not enough to do all that you need done? I propose that the sustainable antidote to hyper activity is  mastery. Searching for mastery is a deliberate process of practice, reflection, and adaptation. The difference between good and great has a palpable impact on people around us, and is actually a minimum bar if we want a real shot at achieving our mission.

Though this word has strong negative connotations, obsessing about the right things in the right way (call it a pragmatic obsession) is a natural outcome of work that we care about. If you could wake up and cure cancer with a magic wand, would you talk about it at the dinner table? I would hope so. When you’re winding down to sleep, would you ruminate on the feeling of accomplishment? Probably.

I see at least one important reason why we need to care about harnessing this pragmatic obsession: each of us has something in our own personal resources, experiences, and relationships that when brought into BetterUp, will enable us to do more than we can in an insular fashion. It may be an insight from a friend who you chat with on the weekend, or something you read at night that shapes a new feature or product for clients. We each contribute beyond our job-specific skills with our whole selves.

That is not to say that we need to fall into the trap of overworking and being overly focused on accomplishment. This would not only be detrimental to our productivity but extremely antithetical to the essence of BetterUp.

Each of us knows what we need to be at our best—whether it’s sleep, exercise, or nurturing relationships—and we should feel empowered to own these elements of our lives. Our work often goes beyond the 9-5 not because it’s imposed on us by others but because  it’s life-giving to us. Our mission wants to fulfill itself and it rewards us with meaning as the helpful hands that bring it to life.

This is by no means an exhaustive list of paths to loving work. I’m hoping you can test, create, and share your own “love (work) story.”

For those in the workforce suffering from serious mental illnesses and chronic disorders, access alone may not be enough. Here's how to help. Read More
Well-being
8 min read | December 21, 2020

5 tips to build mental fitness within your teams

Many leaders understand that improving their employees’ mental health is good for their people’s well-being and their business. Unfortunately, they often get the definition... Read More
Well-being
6 min read | January 22, 2020

Did you know that the World Health Organization formally labeled burnout an “occupational phenomenon”? What can you do to help your exhausted-engaged employees thrive? Read... Read More
Well-being
11 min read | January 1, 2022

As we enter 2022, the calendar flip gives us hope and a way to put into perspective what we've learned from the year past. Our coaches provide guidance. Read More
Well-being
7 min read | November 13, 2020

Our routines were dramatically altered this year. And as the weeks have become months, we've grown weary, even frustrated, holding on to what was and resisting change even as... Read More
Well-being
25 min read | September 20, 2021

What is Inner Work®? It’s the key to being a better leader

As the world of work changes, employers and employees are missing the value of Inner Work®. Here's what it is and why it's crucial for performance. Read More
Employee Experience
7 min read | March 20, 2020

Uplift 2020: Ushering in a New Era of Employee Experience

Becoming a parent signifies the end of many things: an uninterrupted night’s sleep, the ability to to take a night off at a moment’s notice, and perhaps, your fancy glass... Read More
Employee Experience
4 min read | September 2, 2019

Why Inner Work® is the ultimate retention strategy

The world of work is changing rapidly for employers and employees. To keep up, we have to reimagine the future and ourselves in it. Inner Work can help. Read More