Social media bringing you down? 4 ways to protect your mental health

The widespread use of social media

How social media affects the brain

4 ways to manage the negative impacts of social media

How to support someone with unhealthy social media habits

I delete a social media app every few weeks.

Usually, it’s after a night of endless scrolling. I look at the time and realized I’ve just spent hours perusing other people’s lives, most I don’t even know. I realize that I need a break, so I remove the app from my phone.

But without fail, after a few weeks of a social media cleanse, I re-download the app. It’s a tumultuous, conflicted relationship where I can’t quite pinpoint how I feel about it.

But most importantly, learn how you can be in the driver’s seat of your mental fitness.

The widespread use of social media

Social media has spread like wildfire in the last two decades. I still remember when I first got a Facebook in high school. It was all anyone could talk about, this new platform to communicate and connect with friends.

How many people use social media?

What makes people want to use social media?

The psychology behind social media is a fascinating one. And we’re still learning as the social media platforms evolve, new generations emerge, and new users use tools in different ways.

But we do have some insight into the psychology behind social media — specifically, why we share our lives online.

First, social media is interactive. We give and receive feedback on social media. You can like, comment, and share. When we get positive feedback, we want to keep using it.

Statista ran a survey about why people use social media.

How social media affects the brain

We know that social media impacts the brain. Several studies have been conducted to examine how the brain reacts to social media.

One of the biggest ways social media affects the brain is through dopamine.

Let’s take Instagram. Say you posted a photo from your weekend getaway with friends. Suddenly, “likes” start to trickle in. And with every like, your brain fires off dopamine. Dopamine is known as a feel-good chemical. It’s a neurotransmitter that boosts mood, motivation, and even attention.

Our brains love dopamine. After all, it makes us feel good. This release of dopamine is a big reason why people keep using social media.

According to Harvard researchers, this dopamine release can serve as a social reward. Our brain has four major dopamine receptors. Each of these receptors is like a little trail that is associated with different cognitive and motor functions. 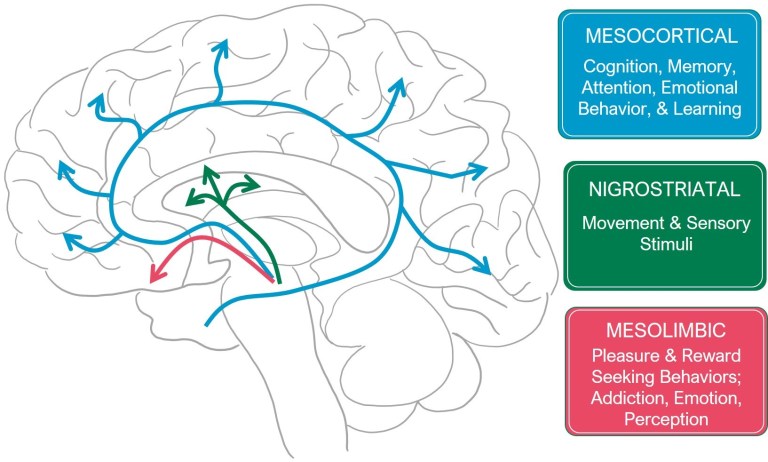 But here’s the kicker. Three of the dopamine pathways are what researchers call “reward pathways.” The release of dopamine in these pathways can shape our behaviors, thoughts, and actions.

Let’s go back to our Instagram example. The “like” is the stimuli. The reaction is dopamine. And what follows is that “feel-good” social reward.

As the “likes” continue, so does our association with these stimuli and the connections it makes. According to the Harvard article cited above, these social stimuli are both positive and negative. Each social media stimuli has the potential to bring negative and positive effects on our brains.

The impacts of social media on our mental health are complicated, to say the least. There are a number of factors that influence how we experience and react to social media. We’ll talk about some of the pros and cons — and what you can do about it.

“Social media can have positive effects, such as a feeling of community and connection to others. It gives us a platform to help us express ourselves and feel heard. However, it has also been shown that social media use can be associated with feelings of loneliness, dissatisfaction, and envy. Sometimes, these feelings lead to depression and anxiety disorders, amongst others.”

There’s an ongoing debate about the negative impact social media has on mental health. And researchers are still studying this aspect.

The negative effects of social media on mental health

Social media is a complicated beast. It comes with its own set of pros and cons. And it can have positive effects on our well-being.

We looked to a recent Harvard study to find out the benefits of social media on mental health. 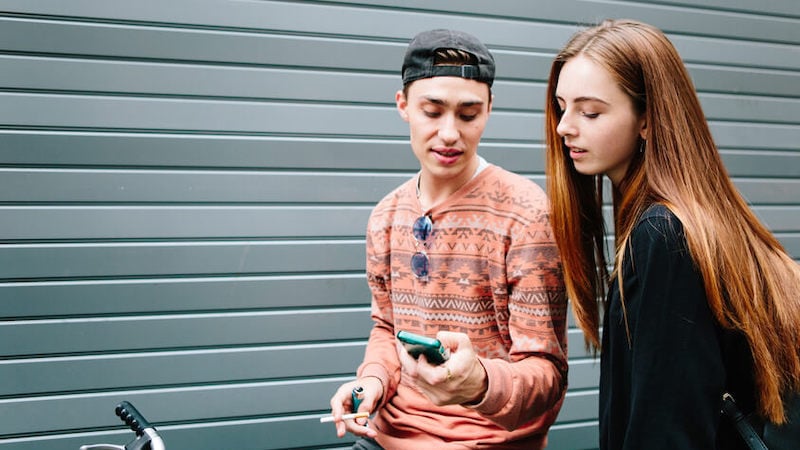 The first step in managing your social media usage is being aware and intentional with yourself.

This requires some Inner Work. Take three deep breaths, scan your body, and try to take note of how you’re feeling before, during, and after you engage on social media.

Here are 11 symptoms that could signal social media is negatively impacting your mental health. 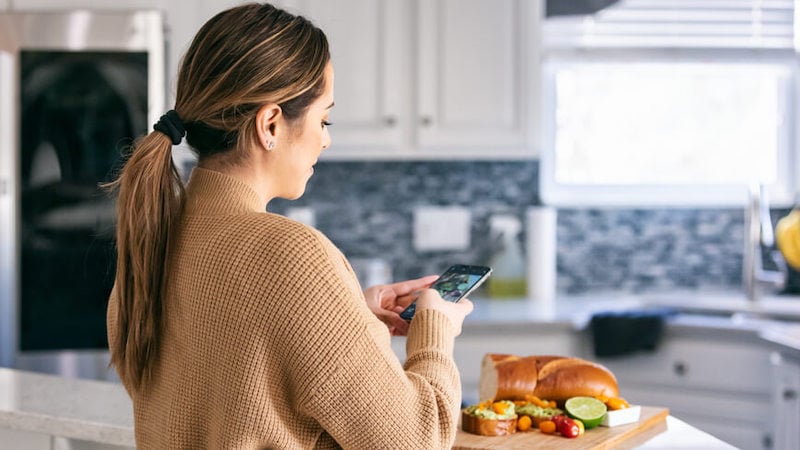 If you experience any of these symptoms, pay attention to them. Try to not suppress them, as much as your brain might want to. It’s important to trust your gut and know when you’re feeling low about yourself. Recognizing these feelings and symptoms is often the first step to learning how to take care of your mental health.

Next, we’ll talk about ways to manage the symptoms and keep the negative effects of social media at bay.

4 ways to manage the negative effects of social media

If you’re struggling with your social media use, you’re not alone.

I’ve felt that need to unplug and detach from social media before many times. Some people I know even do a digital detox practice. It’s not impossible to manage those negative symptoms of social media use.

“If I had to give one piece of advice it would be to be aware of when you feel unpleasant emotions. Be mindful of your emotions while or after using social media, and try to investigate the source of this feeling. We have normalized social media to the extent of not listening to our body and mind’s response when we make use of it. The more aware we are to what could be harming us, the clearer we will be able to see that something needs to be done about it.”

Here are four ways you can help manage your social media use.

1. Put a time limit restriction on your phone

Smartphones are really smart these days. We carry around this little, tiny computer in our pockets that we use for social media.

One study found that adolescents who spend more time on social media are at more risk for mental health problems. Be careful with your time — it’s more valuable than you may think.

Smartphones have time limiting restrictions and settings that you can set. For example, I recently set a restriction on Instagram for 20 minutes. Once I’ve spent that 20 minutes on the app, I get a notification that lets me know that time is up.

Of course, this takes a little discipline and self-control. I’m definitely guilty of snoozing the restriction for 15 more minutes.

Here's a hot take. You don’t have to follow or engage with people who don’t make you feel good.

I had a friend post about this once on Instagram. She recently did a “follower cleanse” for her mental health. She went through everyone she followed and unfollowed accounts that didn’t serve her.

This could look differently depending on who you follow. For example, if you follow Instagram models and know you have body image distortions, do you need to still follow them? Can you remove that person from high school who is always complaining about something?

Try filtering who you engage with and be mindful of why. It can help to improve your experience — and your self-esteem — when you do use social media apps.

In other words, build healthy habits around how you’re spending your free time.

For example, I used to spend a lot of time on social media right before bed. Before I knew it, I’d look at the time and realize I’d sucked an hour of my life scrolling.

I decided to start charging my phone across the bedroom so I didn’t have access to it. And instead of scrolling, I picked up a book.

Think of ways you can build positive habits if you find yourself spending too much time on social media.

If you’re living with depression or anxiety already, you might notice social media can exascerbate your symptoms. Let your health care professional know your symptoms are worsening.

If you’re finding social media is impeding your ability to work, focus, or be productive, let your coach know. With BetterUp, your coach will help provide individualized support to help you get back on track towards reaching your goals.

How to support someone with unhealthy social media habits

Are you a parent or caregiver with a teen that’s struggling? Or maybe your partner or spouse has fallen into a social media slump?

My little brother lives with a severe mental illness. He struggles with his relationship with social media and can sometimes fall into a rabbit hole.

Usually, he can recognize when he’s spending too much time on social media. But he doesn’t always recognize how it impacts his behavior or thinking. And that’s where he’s needs the additional support.

Here are three ways you can support someone with unhealthy social media habits.

As we navigate the new normal, try to find new activities that can help suck up some of that free time.

There’s a good chance that we’re all social media users. We’re all looking for real-life social support, and social media can meet our connection needs.

But it’s a blurry line to toe. While there are many positive aspects, people’s mental health has suffered from social media. Recent research has shown this is especially true for young people and young adults.

But social media also facilitates connection — and has its positive well-being benefits, too. It can keep us connected to family members across the world. It can help us find new career opportunities.

No matter where you are in your relationship with social media, your life satisfaction is important. With BetterUp, you can learn to manage those feelings of inadequacy with some support from a coach.

Everyone should be able to reach their full potential. With support, you can start making changes that will change your life.

Social anxiety: How to ask for help when people stress you out

Social anxiety is more than just shyness. Learn more about how social phobia impacts daily life — and how to get the support you need to overcome it. Read More
Well-being
16 min read | April 21, 2022

Mental health days: What, when and why you shouldn’t hesitate to take one

Taking time for yourself can make you better at — well, everything. Learn about mental health days, why they matter, and how to make the most of them. Read More
Well-being
23 min read | May 3, 2022

When you're feeling like an island, 6 ways to overcome isolation

Social isolation and loneliness are very much related. Learn how social isolation affects mental health — and how you can overcome it. Read More
Well-being
15 min read | May 24, 2022

Too much alone together. The risk factors for social isolation

Learn the social isolation symptoms if you’re worried about yourself and your loneliness. If you’re struggling, don’t hesitate to reach out for support. Read More
Well-being
16 min read | May 20, 2022

Not sure what to do on a mental health day? Try these 12 ideas

Look out for these 10 signs that you need a mental health day — and use some of these ideas to help nurture and care for your mental health. Read More